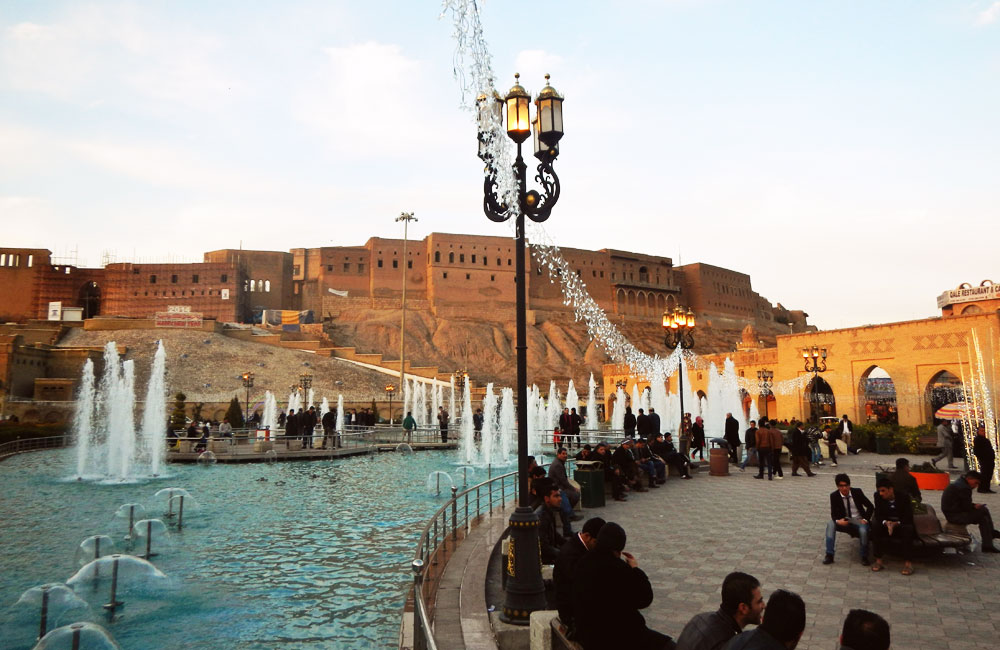 Always wanted to visit Iraq, but were too afraid to go because of the security issue? Erbil, in the semi-autonomous Kurdistan Region in northern Iraq, makes a holiday in ancient Mesopotamia possible.

Known for its good security, low crime-rates and rich oil fields, the secular and pro-Western capital of Kurdistan Region has been named the 2014 Arab Capital of Tourism, beating out sexy Beirut, conservative Sharjah and little-known Taif.

A favorite among the globe’s many glossy travel magazines and other media, Erbil also caught the attention of the National Geographic, listing the city among only a few spots in the world in this year’s “Best Trips,” claiming Erbil “will make you forget everything you’ve heard about Iraq.”

But what’s there to do and to see? Let’s check out the city’s top 10 Attractions.

1. Erbil Citadel
Rising about 30 meters from the surrounding area, the city’s heart is the 8000 year-old (some claim, 10,000) Erbil Citadel, sited on a naturally defendable 10-ha plateau, which explains why the Sumerians, Assyrians, Babylonians, Sassanids, Medes, Romans, Abbasids, Ottomans and others have all based themselves here, in the world’s oldest continuously inhabited city. The citadel is undergoing massive renovation with assistance from Unesco, ahead of a World Heritage Site listing, but parts remain open to visitors. Once work is finished, it will be home to several boutique hotels, cafes, art-galleries and museums. Today, the citadel’s main attractions include an ancient mosque, a hammam (public bath-house), an antique and souvenir shop, the Kurdish Textile Museum, and gorgeous views of the city from both its gates.

2. Ainkawa
On the way to the airport is the sprawling suburb of Ainkawa, often described as one of the largest Christian enclaves in the Middle East. Famous for its many churches, including the Babylonian-inspired, ziggurat-styled Mar Yousef (Saint Josef) Church, Ainkawa has a predominantly Assyrian Christian population who speak neo-Aramaic (although, a growing number of expats in the area might outnumber them in the near future). Visit the Assyrian Museum, and relax later at one of the many trendy cafes and bars frequented by both expats and locals.

“The Grand Canyon of the Middle East”

3. Korek Mountain
In a recent report, CNN called Erbil “the Switzerland of the Middle East.” To believe that, take a 2-hour ride north via the famous Hamilton Road (named after the New Zealand architect who built it a century ago) to Korek Mountain. Passing through some of the most beautiful natural sights in the region, including Gully Ali Beg (the “Grand Canyon of the Middle East”) and at least a dozen waterfalls, you’ll arrive at the recently-opened Korek Mountain Resort and Spa, where you have to take the breath-taking teleferique ride to the top of the mountain, home to Iraq’s first ski resort (and, you can still see parts of the Iraqi National Astronomical Observatory, placed at the top of Korek mountain by the Saddam-regime in the 1980s). Complete with luxurious villas and chalets, restaurants and cafes, and a soon-to-open hotel, this high-end resort could become a top Middle Eastern winter attraction in the near future. This year it hosted the inaugural Erbil Winter Festival. In the future, one hopes, it could host the first Winter Olympics in the Middle East.

4. Choly Minaret
Iraq’s answer to the leaning tower of Pisa, is the locally nicknamed Choly Minaret (originally called Mudhafaria Minaret) built in the early 12th century – the only remaining structure of a once-grand mosque. Today, it’s located in the beautiful Minara Park and is together with the citadel one of the city’s few remaining historical landmarks. Don’t miss the cable-way ride from here to the adjacent Shanidar Park, where an art-gallery is one of the highlights.

5. Erbil’s nightlife
One surprising discovery for newcomers is how the nightlife in Erbil is rapidly becoming one of the best in the region, not very far behind Dubai or Beirut. Not only has the city very relaxed alcohol policies (or lack of them rather) – even by Western standards – buying liquor in one of the dozens of liquor stores in the city (there’s even one on the highway to Masif Salahaddin, perhaps explaining the high number of road accidents) is also very cheap. Popular bars and lounges are usually concentrated in Ainkawa or in one of the many five-star hotels in the city. Highly recommended in Ainkawa are RJ’s, TBar (which also has the city’s first slot-machines), SkyBar (at Nobel Hotel) and Deutscher Hoff (a German Biergarten). The Marina restaurant, on the outskirts of Ainkawa, is well-known for its good food, drinks and live-band. Divan hotel, currently Erbil’s most luxurious hotel, offers great Japanese dishes and expensive drinks at QI21 (the city’s top Sushi Lounge), with majestic views of Erbil and its surroundings. For real glitz and glamour, in the coming weeks, the hotel will also see the opening of the Lotus Nightclub and Lounge, the first of its kind in Iraq, and the owners claim it “will be competing with international top places to be seen at.”

6. Gulan Road – Iraq’s Dubai
Take a ride on the smooth Gulan Road, and see with your own eyes how Erbil is rapidly turning into a top Middle Eastern business hub. Home to many five-star hotels, business towers and the city’s most expensive real-estate properties, the area around Gulan Road (and 100M Ring Road) is often dubbed “Iraq’s Dubai”. And Dubai took notice too; its famous real-estate developer Emaar is currently building a dynamic and inspiring new city center on Gulan Road. Named “Downtown Erbil”, the US$3 billion project is spread over an area of 541,000 sq m (over 133 acres), and promises to deliver the world-class project development competencies of Emaar, which has created global icons such as Burj Khalifa, the world’s tallest building, and The Dubai Mall, the world’s largest shopping and entertainment destination. Modeled after Burj Khalifa, Downtown Erbil will include the city’s largest mall, iconic twin towers, superb hotels, a central business district, and luxurious homes – once completed by 2017.

7. Qaysari Bazaar
No visit to Erbil is complete without seeing the 12th century Qaysari Bazaar, one of the world’s largest and oldest souqs. Located near the ancient citadel, it’s currently being restored. As it accommodates all types of sellers – including different parts for gold, spices, textiles, foods and meat – the bazaar is huge and has many alleyways. Look for stores selling local produce and souvenirs. Buy Kurdish honey (regarded as one of the best in the world) or sweets like baklava. “Kalash” – hand-made Kurdish shoes – are popular gift items, along with decorative Kurdish rugs. While at the Qaysari, don’t miss Mam Khalil’s chaykhana (teahouse). In 1948, Mam Khalil (now 76 years old) began as a worker in the tea house which was owned by his father; today he owns and runs the little treasure – covered with old and new photographs – that is hidden in the maze of small paths in the bazaar.

8. Khanzad Castle
Built for the Kurdish princess Khanzad in the 18th century, this imposing castle (located on top of a hill), is a mere 20-minute ride outside of Erbil, reached from the main Masif Salahaddin Road, overlooking beautiful mountains and vistas.

“An oasis of tall trees, rose-gardens and lakes”

9. Sami Abdulrahman Park
Erbil’s equivalent of New York’s Central Park is not only the largest city park in the Middle East, but also among the largest in the world. Once a detention center under Saddam Hussein’s regime, the Kurdistan Regional Government (KRG) turned it into an oasis of tall trees, rose-gardens and lakes. Local and expat families come in droves to picnic or exercise here. Others come to see its many monuments and statues. The park takes its name from the former KRG Deputy Prime Minister, Sami Abdulrahman, who was killed in the February 2004 terrorist attack that claimed around a hundred innocent lives. The Martyrs’ Monument is dedicated to the victims of the blast, and provides a sad reminder of Iraq’s bloody history, which with the exemption of this attack and two smaller ones in the past ten years, has largely avoided Kurdistan Region. At the monument, one plaque reads: “Freedom is not free”.

10. Shopping Malls
Just like the nearby Arab Gulf states, Iraqi society is increasingly becoming shopaholic, with large, Dubai-esque malls springing up like mushrooms. Hungry for the latest international brands, American cinema-culture and fast-food, Erbil’s residents and visitors have the choice of around a dozen malls – and that number is growing by the day. Popular malls – with sometimes, odd names – include Family Mall (the city’s largest) on 100M Ring Road, Majidi Mall on Kasnazan Road and Royal Mall on Shoresh Street. Take a seat in one of the malls’ cafes, order a cappuccino or mocha, and watch this multi-cultural country empty its wallets in Iraq’s shopping capital.

ALSO READ: Djerba – “where the air is so mild it prevents you from dying”