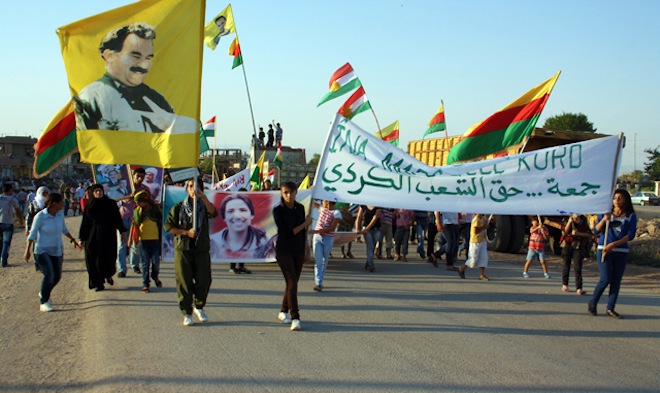 “People in this region of Syria have made this move to set an example for the rest of the country, persisting that we can be united and that decentralization can bring about democracy, diversity and peaceful co-existence for us all in Syria,” says Kurdish leader.

Kurds with other ethnic minorities announced amid the mayhem in Syria and on the eve of the Geneva II peace conference, the formation of three self-rule governments under the banner of “Democratic Autonomy” without an international approval.

The move is expected to further shift balance of power in Syria and is considered a historic turning point impacting regional politics in relation to the Kurdish national question.

They are commonly referred to by Kurds as, “Western Kurdistan”, or, “Rojava” (West), since the region is claimed as being part of “Greater Kurdistan”.

22 ministries, including foreign affairs, defense and justice, head each of the local canton governments.

The borders of this new predominantly Kurdish autonomous region in Syria now sweeps horizontally from the northeastern town of Derek in Cizire Canton bordering Iraq, to the westernmost Afrin Canton in Aleppo Governorate bordering Turkey.

22 ministries, including foreign affairs, defense and justice, head each of the local canton governments.

Male and female co-leaders run the council of ministers of each government with three deputies representing the local diversity.

“It is true that Kurds have led formation of the canton governments, but political representatives of the local Assyrian, Arabs and other Christian communities also make up a substantial part of the autonomy,” said Salih Muslim, co-leader of the largest pro-Kurdish party in Syria, the Democratic Union Party, better known by its Kurdish acronym, PYD.

“The ministers, led by women, gave an oath of office in Kurdish, Arabic and Assyrian, but first in their mother tongue and each used their own holy books,” Muslim said, adding, “Democratic Autonomy does not mean separatism, the people in this region of Syria have made this move to set an example for the rest of the country, persisting that we can be united and that decentralization can bring about democracy, diversity and peaceful co-existence for us all in Syria.”

15 political parties, including Kurdish and non-Kurdish, have joined the self-rule governments, the PYD, however, is believed to be the main player behind the move.

The Assyrian Unity Party (AUP) and Assyrian Women’s Union (AWU) have eagerly welcomed the autonomy and soon joined the governments.

“The autonomy announced in Western Kurdistan includes everybody who lives here,” said Fathullah Hussein, spokesperson of the Kurdish Left Party in Syria (KLPS), which also advocates the autonomy and has representatives in the self-rule governments.

OPINION Barzoo Eliassi: The politics of Kurdish identity in Turkey

“This is our democracy built on diversity of Western Kurdistan and it can be likened to devolution in Europe,” he said, insisting they firmly believe that “local democratic self-rule of communities can end the civil war in Syria because decentralization is the very essence of peaceful co-existence and a guaranteed democratic future.”

Kurds, Arab Muslims, Assyrians and other Christian minorities have joined the ranks of those militias renowned for having simultaneously clashed with Syria’s regular army as well as Islamist rebel groups. But for the past year they have mainly engaged in fierce clashes with Islamic State of Iraq and al-Sham (ISIS) and al-Qaeda-linked al-Nusra Front.

“The regime is fighting for survival, it is in a life or death situation elsewhere in Syria, that is why for the time being the official army prefers to ignore the Kurdish region,” said Redur Xelil, YPG General Commander.

The PYD and its allied organisations first took control of Syria’s predominantly Kurdish north back in July 2012.

International and regional powers have been reluctant since to recognise Kurdish-led autonomy in Syria and labelled the PYD as an offshoot of the Kurdistan Workers Party (PKK), essentially because the PYD likewise advocates “Democratic Autonomy”, the political philosophy of imprisoned Kurdish leader and PKK founder, Abdullah Ocalan.

The U.S., Turkey and certain Syrian opposition groups have also claimed that the PYD is supportive of President Bashar al-Assad because it has refused to become part of the opposition National Coalition. But the PYD and even non-PYD figures strongly reject such claims.

Helim Yusiv, an independent and renowned Syrian Kurdish writer based in Berlin, whose novels have been translated into Arabic and German, said, “It is regrettable that the U.S., Turkey and some in the Syrian opposition, to undermine the Kurds, propagate that Syria’s Kurds and the PYD support Bashar al-Assad, when PYD was the only Syrian party that had over 2,000 of its members in Assad’s jails for alleged attempts to overthrow the regime prior to the recent revolution.”

Yusiv added, “It is also an insult to even assume that Kurds support Assad in Syria, when back in 2004, Kurds led an uprising against the regime in the city of al-Qamishli. And, during this civil war, many Kurdish men and women of the YPG and YPJ forces were killed while fighting Assad’s forces.”

Formation of the first autonomous canton government of Cizire was announced on 21 January 2014, on the eve of the Geneva II peace conference that rejected direct Kurdish representative unless Kurds agreed to become part of the opposition National Coalition.

The PYD and its allies in response rejected adherence to any resolutions Geneva II may reach. They also strongly blamed the US, France, Saudi Arabia and Turkey for blocking an independent Kurdish representation at the conference.

They described Geneva II as, “New Treaty of Lausanne”, claiming that the peace conference is another attempt by the international community to undermine the role of “democratic minorities” in Syria and elsewhere in the Middle East.

“Geneva II conference is a failure in terms of democratic achievements for the people of Syria and the Middle East,” a joint statement by PYD and its allies claimed. “The so-called ‘peace conference’ is exactly the same as how in 1923, after the First World War, the then international allied forces divided Kurdistan to four regions with the Treaty of Lausanne and left the Kurds and other democratic minorities without a self-ruled homeland of their own.”

Paris-based International relations analyst, Baqi Razwan, said, “The autonomy in Syria led by the Kurds is definitely a reply to how the international community undermined them at Geneva II conference. Kurds basically conveyed a message making clear that they would take their own destiny and continue to fight both Assad and al-Qaeda-linked forces to achieve their demands with or without an international approval.”

He added, “Kurds as well as the Christians perhaps had no choice, but to politically and practically reply to how the international community at Geneva II ignored their broadly peaceful and yet influential role in war-torn Syria.”

Although Turkey has considered the PYD as a “dangerous threat” to its sovereignty for the past two years, formation of the canton governments seems to have already impacted Turkey’s anti-Kurdish stance.

PYD co-leader, Asia Abdullah, is now in Ankara, where she attended the Turkish parliament to debate the role of Kurds in Syria.

The U.S., UK, France and Iran appear tight-lipped and are yet to make their positions clear, at least for now.