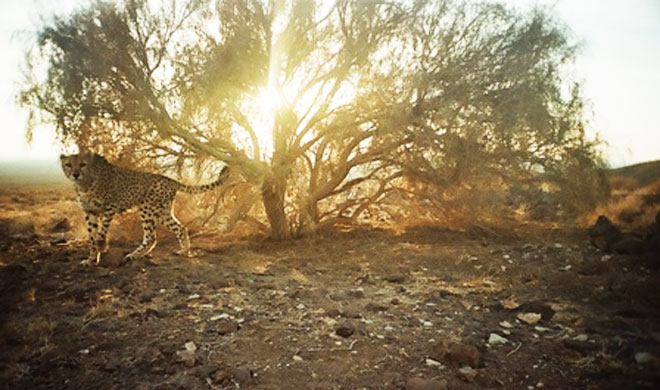 A mere 70 to 110 specimens of the Asiatic Cheetah are believed to be left in the wild. And they are only found around Iran's central plateau.

Though very similar in looks to its African relative, the Asiatic Cheetah is perilously endangered. Once scattered over an area ranging from the Indian subcontinent to Syria and the Arabian Peninsula, Asiatic cheetahs can now only be found around Iran’s central plateau.

But even here, they are incredibly hard to find. As a matter of fact, only 70 to 110 specimens are believed to be left in the wild. As the Iranian wildlife biologist Houman Jowkar told National Geographic in 2012, even game wardens who have lived and worked in the area for years have never been able to spot one.

According to the Panthera organization, one of the many involved in the ongoing “Conservation of Asiatic Cheetah and Its Habitat Project” (CACP), two main factors share the responsibility for the steady drop in their number.

First, the abrogation of all regulations protecting the animals living within cheetahs’ range. The disbandment of these laws at the beginning of the Iranian revolution led to unregulated hunting of the big cat’s natural prey, causing cheetahs’ numbers to plummet.

“Not only has the spotting of families been generally rare over the last years, but the presence of cubs is especially encouraging

While regulations were later on reinstated, Asiatic cheetahs still have to face the results of illegal poaching, which is not only directed at their natural prey. Indeed, while the Asiatic cheetah is a protected sub-species, herders keep hunting it in order to protect their livestock, and there have been reports of cheetah cubs being captured and sold as pets by illegal poachers.

Second, both natural and forced changes to the cheetahs’ natural habitat have drastically reduced the physical space suitable for their survival. In particular, allowing agriculture and livestock in protected areas has placed cheetahs in direct competition with humans.

“I do believe that the first and most important endeavour to conserve and protect this species is to answer two fundamental questions: how many Asiatic cheetahs still inhabit Iran? And where are the hot spots that constitute their fragmented habitat through the central desert?” explained wildlife journalist Sam Khosravifard, who has been trying to raise awareness about the issue, in an interview with Your Middle East.

“Despite the fact that Iranian researchers and NGOs have been trying to answer these questions with the assistance of experts and international organizations, the efforts have not been adequate enough”.

As he documented in an article for Scientific America, increasing efforts to save Asiatic cheetahs from extinction have been made by both the Iranian government and the international community.

The Iranian Department of Environment launched the CACP in 1998, with an initial budget of $25,000. Then, in 2001, the United Nation Development Program’s (UNDP) Global Environmental Facility (GEF) began to fund the project, raising the budget to $725,000. An equal amount was to be provided by the Iranian DoE, but the project’s duration was prolonged from the initially planned 4 years to 8, and the DoE ended up contributing even more than the agreed sum.

The project also received the assistance of the Wildlife Conservation Society (WCS), the Panthera organization and a number of Iranian NGOs, but despite all this dedication, Khosravifard’s two key questions still remain unanswered.

But there are reasons to believe the situation may be at a turning point. The old generation of decision makers and high-ranking officials whom Khosravifard believes have “no idea about the importance and role of wildlife” is gradually being replaced. Recently, the second phase of CACP, which had been initiated in January 2009 to run for four years with a budget of $4 million, has been extended through 2015.

ALSO READ: On a motorbike through Turkey

Finally, all these efforts seem to be bearing fruit. Last October, The Guardian reported the sighting of a group of five Asiatic cheetahs, a mother with four cubs, by conservationists at the Persian Wildlife Heritage Foundation (PWHF). Not only has the spotting of families been generally rare over the last years, but the presence of cubs is especially encouraging. It is a demonstration of cheetahs’ resilience, and of their ability to survive and continue life through breeding.