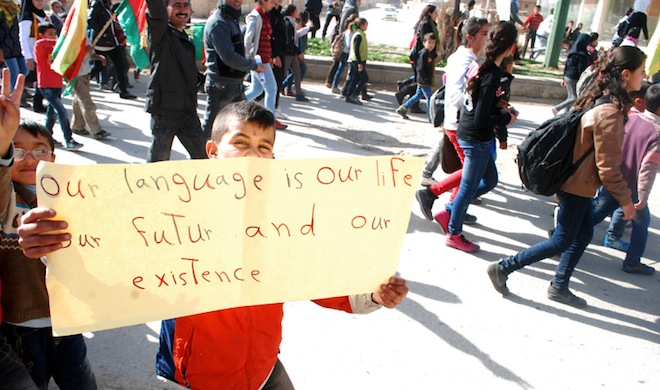 While fighting to reclaim their own cultural and political rights, Kurdish communities in Syria encourage others to defend peaceful co-existence.

Thousands of Kurdish school kids in Syria’s Kurdish region took to the streets on International Mother Language Day to promote cultural diversity and multilingualism amid the ongoing sectarian civil war.

International Mother Language Day is a UNESCO sponsored annual observance day, although passing unnoticed in many countries around the world for school kids here in Syria’s Kurdish north it was a nationwide event celebrated in various forms.

In the predominantly Kurdish city of al-Qamishli, school kids and their teachers paraded through the streets on Thursday afternoon, a day before the observance day was due and raised the slogan: “life is worthless without mother tongue.”

“We value every opportunity like this international observance day to promote diversity in Syria”The kids greeted each other in Kurdish, but called on Damascus in Arabic, “We always demand to have our Kurdish language. Freedom is a lie without the right of nations to education in their mother tongue.”

Zozan Muhaidin, a head teacher in al-Qamishli and leading member of the recently established Kurdish Language Institute, said, “On this day we Kurds greet all nations in the world, but particularly our beloved Assyrian and Arab brothers and sisters here in Syria. We cherish the right of nations to education in their own mother tongue because we were deprived of it in Syria and really suffered without it.”

She added, “We value every opportunity like this international observance day to promote diversity in Syria because it gives hope amid the civil war.  We Kurds believe that Syrians can finally put an end to dictatorship as well as the sectarian civil war by advocating diversity for all in all walks of life.”

The demonstration in al-Qamishli admired the Kurdish authorities for having managed to promote cultural diversity and Kurdish mother tongue in the last two years amid the civil war, but shamed the Ba’ath regime in Damascus for having denied Kurdish existence and banned Kurdish language during its’ reign in the Kurdish region.

“People celebrate on this day in Syrian Kurdistan because under the Ba’ath regime it was a dream to speak Kurdish and publically hold placards displaying slogans in Kurdish language, it was illegal to be Kurdish in the first place,” said Shirin Xalaf, a Kurdish teacher in al-Qamishli.

“Kurdish parents used to advice or sometimes hit their kids, to stop them mentioning anything Kurdish at state schools, but we now have thousands of Kurdish schools and institutions established by our local authorities and defended by our martyrs, to regain a language and culture that we had nearly lost under the rule of a racist state,” she said.

Kurdish language in Syria was first banned in 1962, but being Kurdish invited only little trouble at the time. After Hafiz al-Assad of the Syrian Ba’ath Party assumed power in a coup d’état in 1970, Kurdish cultural and political assemblies were strictly outlawed, the former criminalized and the latter described as, “acts of terrorism.”

After the anti-government protests in Syria transformed into a nationwide popular uprising and entered into a full-scale civil war in 2011 and onward, minority Kurds numbering an estimated 3 million made an unpredicted move northeast of the country.

Instead of taking sides in the civil war, they pledged to fight anyone attempting to bring the war into their region, whether Assad or the opposition.

From then onwards, in an effort to reclaim cultural and political rights, thousands of Kurdish schools and cultural centres were established across the Kurdish region run by volunteer teachers and social workers, who taught and worked for free even during summer holidays.

Now in the city of al-Qamishli alone, there are 75 Kurdish schools and no village is left without one in the Kurdish-led autonomous cantons.

“We urge you to further your mother tongues”The Kurdish Teachers’ Union in al-Qamishli on this observance day has greeted in an official statement the Armenian and Assyrian minorities in Syrian Kurdistan. “We encourage and urge you to further your mother tongues in the Kurdish region despite the difficulties in this civil war,” says the statement. “But change first begins with hope and promoting cultural diversity and co-existence in these difficult times can provide hope for us all in Syria.”

Anylya Kilmyva, an Assyrian teacher and member of the Peoples Education Committee in Cizire canton, said, “Kurdish existence was denied in Assad’s Syria and promoting Kurdish right to self-rule meant ending up on the gallows of state security prisons,” adding that despite the oppressions faced, “Kurds are now the biggest section of Syrian society promoting cultural diversity as an alternative to the sectarian civil war. They also persistently encourage us Assyrians to open more language schools, churches and cultural centres because they really do believe that cultural diversity is the solution to all the problems we now have in Syria.”