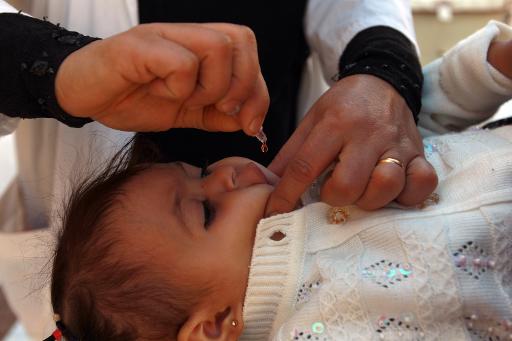 Millions of children in the Middle East will be vaccinated against polio this month after the crippling disease resurfaced in conflict-hit Syria, the United Nations said Sunday.

Mass vaccinations have already been launched in Egypt, Iraq, Jordan and Syria, while a similar campaign in Lebanon will start on March 9, the UN Children’s Fund Unicef said in a statement.

“The detection of polio in Syria is not Syria’s problem alone, but one requiring a regional response. The safety of children across the Middle East relies on us being able to put a stop to polio in Syria.”

Preliminary evidence suggests the virus in this outbreak — and also polio samples found in sewage in Egypt, Israel, the West Bank and Gaza Strip — came from Pakistan, one of the disease’s last bastions.

The Syrian Ministry of Health said in October that polio had returned to the country for the first time in almost 15 years.

“We need to get two drops of polio vaccine into the mouth of every child under the age of five, regardless of their previous immunisation history, every time there is a campaign,” Khouzama al-Rasheed, a medical worker at a health centre in rural Damascus, was quoted as saying in the statement.

Inside Syria, the campaign is targeting 1.6 million children with vaccines against polio, measles, mumps and rubella,

“To vaccinate so many children in different countries is a huge undertaking,” said Maria Calivis, UNICEF regional director for the Middle East and North Africa.

“Each country faces its own set of challenges in order to make the campaign effective — above all in Syria — but this is the only way we can ensure children across the region are properly protected against this terrible disease.”