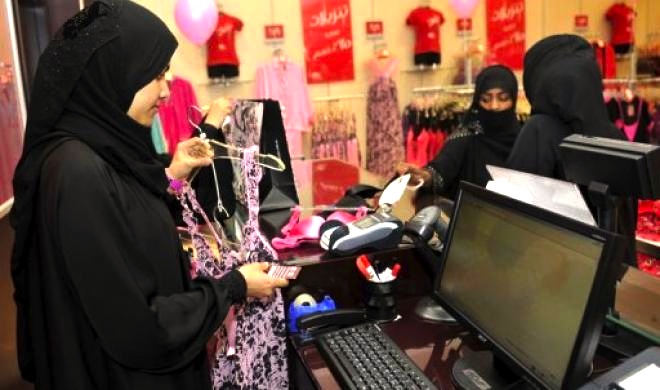 In a society that doesn't really encourage male-female interaction, it can be very hard for a man to pitch a sensual red dress to a woman. That, among other things, has opened up a new space for women in the Saudi job market.

Over the past five years, many dramatic shifts have taken place within Saudi Arabia. The launch of the new multibillion-dollar King Abdullah Science and Technology University (known as KAUST) marked the introduction of the country’s first co-ed university. In a society where artistic expression has traditionally been kept private, there are now weekly exhibitions at galleries that have opened across the country.

According to Reuters, the country has become the biggest per-capita user of YouTube in the world, with Saudi produced comedy shows and stand-up being widely popular. The satirical video “No Woman, No Drive” — inspired by Bob Marley’s “No Women, No Cry” — made by Saudi comedians to mock the driving ban on women recently went viral. With nearly 80% of the population working for the government, many of the country’s younger generation are opting for a more entrepreneurial path, becoming part of a growing number of technology incubators.

This increasingly tech- and social media-savvy culture has also paved the way for new activists to emerge. One example: Jeddah-based wealth manager Reem Asaad. After Asaad launched what is known as the “Lingerie Campaign” on Facebook to launch trainings for women to work in retail, King Abdullah signed a decree banning men from working in all lingerie and cosmetics shops. The new law not only created tens of thousands of jobs for women, it also has helped boost sales for retailers, says Reema Bint Bandar Al Saud, CEO and president of Alfa International, which owns the license to Harvey Nichols Riyadh as well as the U.S. clothing company Splendid. Al Saud also launched a luxury bag line called Baraboux designed specifically for working women.

With the exception of accessories and shoes, where sales have stayed the same, she has seen earnings increase in every other department, thanks to female employees. “In this type of society, it’s very hard for a man to make a sales pitch to a woman (about) how a red dress is her color,” Al Saud notes. When Al Saud went to her board to get a transportation stipend approved for women employees who may have difficulty getting to work otherwise, she says it was an easy sell after she showed that women often earn back three times the amount of their daily stipend from a single sale.

Al Saud has also invested in training for female employees that goes well beyond basic retail skills such as how to use a cash register and customer service. Working with many international brands, her staff receives English language instruction so they can better understand marketing materials. Many of the women come from environments where they typically haven’t interacted with men outside of their immediate family, Al Saud notes, so “soft skills” training is also needed.

“We train women on how to interact in a professional capacity with both males and females,” she says. In addition, as most of her female employees are completely new to the workforce, she offers training in financial management, career planning, salary scales, benefits and concepts such as performance pay. She emphasizes the notion that success goes beyond personal sales but also encompasses the performance of the whole store. Employees learn that they “can send a client over to their teammates so they will find” whatever they need.

Al Saud also prepares trainees to deal with customers who are not necessarily supportive of the fact that they are working. “We had a woman come in the other day and tell a (female employee) working in our accessories department that she should be ashamed of working in a mixed environment,” she says.

Harvey Nichols and other retailers must follow the strict guidelines laid out by Saudi Arabia’s Ministry of Labor, which include an actual measurement of how close male and female employees can stand from one another. For example, they can’t work together at the same counter. In an open space, for every one male, there must be three female employees so the two genders never find themselves in a one-on-one ratio. Additionally, the company break rooms are kept completely apart and are designated strictly male or strictly female. As the inclusion of women workers in retail is a new development in Saudi society, Al Saud says the rules of the ministry make sense to her and she follows them very closely.

Among the provisions not currently part of federal law, but which Asaad and other activists would like to see become a requirement, are nurseries for employees’ children. Al Saud provides that benefit at her company; her female employees are typically in their early thirties with two children. While some of the women are married, others are divorced and often struggle to find work that fits in with their children’s schedules. Even male employees bring their children to the nursery, often to give their wives a break.

“We train women on how to interact in a professional capacity”While providing solutions to make it easier for women to take a job, Al Saud faced the challenge of altering the prevailing view that the service industry is for foreign workers, not native Saudis. Her company partnered with Glowork, Saudi Arabia’s first female recruiting platform (which was recently acquired by SAS Holdings), and launched a campaign called, “You are my pride,” which highlighted women in the workplace, especially those in retail. “We wanted to emphasize that although you’re embarking on a career path and may start as sales woman, you could end up in more senior roles,” Al Saud notes.

Al Saud is an advocate of working women, but she sees her work as a way to bring women to an equal level to that of men — not at their expense. For example, rather than simply firing her male employees in sales after women were granted the right to work, Al Saud gave her top male performers a chance to work in marketing, utilizing their past experience on the sales floor. “I don’t want to look back five years (from now) and say there are all these phenomenal women, but we’ve ignored the men,” she says.

Asaad agrees, and notes that campaigns to elevate women are also helping to create a culture of productivity throughout all of Saudi society. “It’s about women working, and also having a generation 10 to 20 years down the line that is not dependent on foreign labor and has working role models to look up to,” Asaad says.

According to a report conducted by Cisco, 78% of unemployed women have graduate degrees, and 30% of those looking for work can’t find it. But women are finding jobs in an increasing number of sectors that typically did not employ females, including defense, agriculture, customs, airports and information technology. In fact, in today’s Saudi work landscape, women employees exist in all ministries. In the banking headquarters, where Asaad works, there is no segregation of the sexes as in most other sectors, thanks to the Central Bank having immunity from religious authorities.

Another area where women have the opportunity to thrive is in technology. Sarah Al Mubarak, a financial consultant at the Badir Program for Technology Incubator — where close to 30% of entrepreneurs served are women — has been working to grow the angel investing community within the Kingdom.

Women are finding jobs in an increasing number of sectorsAccording to Al Mubarak, initially it was hard to convince investors to put their money in start-ups rather than investing in real estate and the stock exchange. Those who invest often see it as a philanthropic endeavor, rather than one focused on returns. In turn, many entrepreneurs don’t want to give away equity to angel investors and would rather bootstrap or take debt financing from the government. Al Mubarak notes that getting financing from the government is a lengthy process that can take up to a year; it is also typically very difficult for a technology business to get approval since the firms often don’t have physical assets.

There are other challenges as well. A female entrepreneur whom the Badir program has worked with was offered debt financing from the government only if she shifted her manufacturing from China to Saudi Arabia, which she refused to do. Al Mubarak says Badir is trying to get the government to change its approach and to understand that it can put a young start-up out of business if the firm is restricted to manufacturing in Saudi Arabia, where costs are much higher.

While there are funds for women in micro-business, Al Mubarak notes that there needs to be more support for women with companies in areas such as e-commerce, bio-technology, advanced manufacturing and mobile apps.

“Before the oil industry came, nearly everyone in the Kingdom was an entrepreneur whether they worked in farming, trading, finance or (owned) stores,” says Al Mubarak. She believes that as more women — and men — are able to find success as entrepreneurs, the culture in Saudi Arabia will continue to change.

This article is mirrored from Knowledge@Wharton.