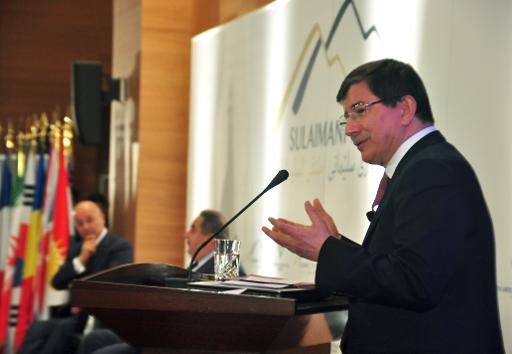 Turkey’s foreign minister, whose government has long been at odds with Kurdish nationalists at home and abroad, drew cheers Tuesday when he opened a speech in Iraq using the Kurdish language.

“I am happy to be at the forum in Sulaimaniyah,” Ahmet Davutoglu said in Kurdish to a gathering of academics and politicians at the American University of Iraq in the autonomous Kurdistan region’s second city of Sulaimaniyah.

The fact he used Kurdish, a language rarely spoken by Turkish politicians, drew raucous applause and cheers from the crowd.

Davutoglu added that he hoped Iraqi President Jalal Talabani, a Kurd, recovers from the effects of a stroke, for which he has received treated in Germany for more than a year.

“These are from my heart to your heart,” the minister then said in English, referring to his Kurdish remarks.

“Three decades ago… Leyla Zana was imprisoned (in Turkey) because she wanted to swear hear oath in Kurdish,” Zebari noted.

Zana, an prominent Kurdish women’s activist in Turkey, caused an uproar in 1991 after uttering a single sentence in Kurdish during her parliamentary swearing-in ceremony.

She was arrested after losing her seat three years later and released in 2004.

Kurdish-language education in Turkish state schools remains heavily restricted, and Kurds in the country have demanded that change.

They are also demanding the release of Kurdish prisoners and political activists and reducing the 10-percent election threshold required to secure seats in parliament.

Turkey fought a multi-decade battle with militants from the Kurdistan Workers’ Party (PKK) seeking self-rule in its southeast, and has carried out air strikes in northern Iraq, where the group has bases.

Ankara launched clandestine peace talks with the PKK in 2012, which led to the rebels declaring a ceasefire in March last year.

But the peace process has been stalled since September.