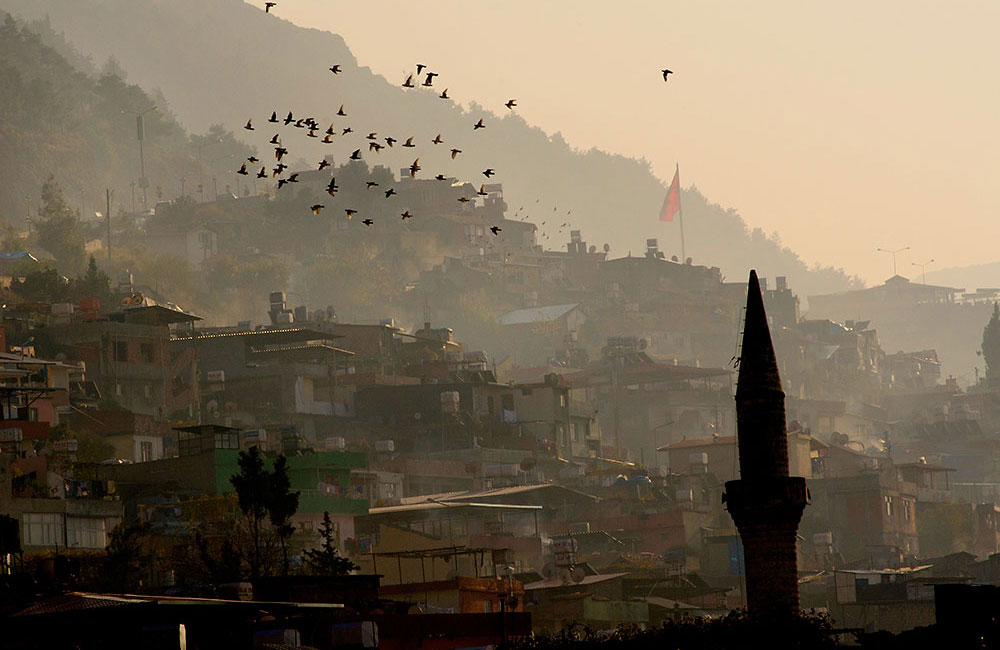 Photographer John Wreford has been to a part of Turkey where the hotel manager only speaks Arabic.

I rapped the knocker a couple more times on the heavy wooden door of the hotel and waited, as I blew on my freezing fingers and my breath hung in the musty air like an ominous rain cloud. It was early evening but already the streets thick with the smell of wood smoke were deserted. It seemed much later when I rapped again, a little harder this time, and through the side window I could see an old man hobbling towards the door.

He welcomes me inside and as I am telling him I have a booking he interrupts to say he only speaks Arabic. Off the beaten track in Turkey it’s hardly a surprise to find English a struggle and anyone even remotely familiar with the country would know that the Kurds have their own language – but Arabic?

Well, yes – this is Antakya and according to Syrian maps it is still part of the Arab Republic. Culture and identity rarely recognizes borders and the Hatay province of Turkey merges seamlessly with that of its Arab neighbors.

Neither the Arabs nor the Turks drew the borders, the collapse of the Ottoman Empire handed that privilege to Europe and although the border has been in dispute ever since, the Syrians have not really made a big deal of it as they prefer to make the loss of Golan in the south more of a political issue.

The myriad diversity of Turkey is neatly packaged in Antakya, from its Hellenistic heritage displayed in the halls of the Hatay Archeological museum to the various denominations of churches tucked away in the warren of lanes that make up the older part of the city.

Known in Biblical times as Antioch on the Orontes where the early converts were the first to be called Christians, the Apostles were busy in Antioch; St Luke was a native, St Peter’s legacy is a rock carved church – one of Christianity’s oldest – a couple of kilometers out of town, and Saul of nearby Tarsus set out on his eponymous journey to Damascus.

Like most Middle Eastern cities it has a small but dwindling Jewish community. The Synagogue is just over a hundred years old and the Rabbi has to fly in from Istanbul for each Shabbat but the community can trace their roots back well over a thousand years to Aleppo a short hop over the Syrian border.

While most of Turkey is Sunni Muslim, in Antakya the majority of Muslims are Alawi – a linage that stretches along the coastal mountain range to Lattakia in Syria. And like most of Hatay provinces’s Arab population families are scattered on both sides of the frontier.

-It’s interesting to note the similarities of Antakya’s cultural complexities – that of Muslims, Jews, Kurds, Circassians and Christians – with that of Jerusalem and equally curious to note that it’s much closer than Istanbul.

Ask any Turk about Antakya and it’s not its ethnic tolerance that springs to mind. Rather, it’s a subject that rises above all others – cuisine. Antakya’s prominent position on the Silk Road and its cultural mixing pot have no doubt contributed to its exemplary repertoire. I didn’t get around to trying the Conger Eels netted in the Orontes river but the spicy Cevizli Biber had me running to the nearest Kunafe cafe to cool the fire burning on my lips.

ALSO READ: On a motorbike through Turkey

The dried hot chilies soaked and beaten, mixed with spices, walnuts and Tahini are a favorite but the Kunafe is cause for pilgrimage. I recently mentioned to an Antakian friend I was no great fan of the sticky cheese and syrupy sweet, she said she had never met anyone who didn’t love Kunefe, an affair that stretches across the Levant. I did seem to be in a minority judging by the early evening crowds milling around the dozens of Kunafe restaurants clustered beside the banks of the river.

Prior to the conflict in Syria, Antakya enjoyed something of a renaissance; trade and tourism over the border flourished and many of the old houses underwent restoration and were converted into boutique hotels, courtyard cafes and restaurants in a similar manner to those of Aleppo and Damascus.

But all that has now become stifled – the city hotels are catering for visiting journalists, NGOs and the kind of shady characters that are drawn to the profit of war. There is a massive influx of Syrian refugees and cross border shenanigans. And now with Turkish elections coming up, the tranquil tolerance of this most Arab of Turkish towns is being tested.