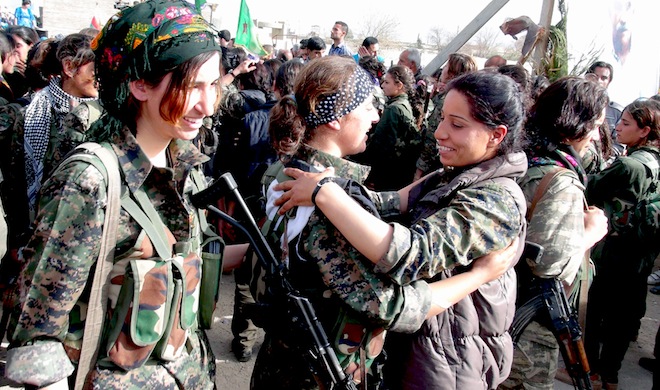 Somewhat surprisingly, on March 8, many Syrians took to the streets to celebrate International Women’s Day. One of the groups present was the YPJ, a women-only defense unit championing women’s rights on the frontlines.

“All in Syria promoted women’s rights on 8 March except Islamists and people living under their control,” said Nijah Noae of the Syrian Women Forum. “But Kurdish and Syriac Christian women in their self-rule autonomous cantons in fact greeted the event in an incomparable way to the rest of the country.”

In the areas under the control of the Ba’ath regime, several events promoted women’s rights but in line with the Ba’ath Party’s political rhetoric, given that 8 March is also the commemoration of the ruling Ba’ath Party coming to power in a coup d’état in 1963.

In the areas ruled by Islamist armed opposition forces, celebrating women’s rights was entirely outlawed, since the hardline Imams announced fatwas against the event.

“Autocracy as well as extremism are preventing women’s liberation” “Celebrating this foreign day is equal to fulfilling the devil’s wishes. Talking about it is also unholy and an unforgivable blasphemy,” many pro-opposition Imams announced through the megaphones of their mosques a day earlier at Friday prayers.

Unlike the areas under the control of the regime and Islamic opposition forces, Kurds and Syriac Christian women organised public events in their self-rule autonomous cantons of northeastern Syria, promoting gender equality and the rights of women to self-defense.

Banners, placards and slogans belonging to the various Kurdish and Syriac Christian organisations covered the main streets of the predominantly Kurdish city of al-Qamishli in the autonomous Cizire canton.

The slogans displayed across Cizire towns and villages were directed at both the regime and the Islamic opposition militias.

“Autocracy as well as extremism are the apparatuses preventing women’s liberation,” read a long banner in central al-Qamishli.

Newly established local communes of the Kurdish and Syriac Christian neighbourhoods in the city greeted the celebration with painting exhibitions, a film screening and performances about feminism.

The public official celebration, however, was held in central al-Qamishli, where around one thousand people, mainly women, gathered and during which several frontline battalions of the pro-Kurdish Women Defense (Protection) Units  (YPJ) suddenly arrived.

YPJ is a women-only armed force in Syria’s Kurdish north that claims to fight both Assad and Islamic rebels to defend the Kurdish-led autonomous cantons in northeast Syria and struggle to maintain decentralization and democracy in those areas.

When the YPJ fighters entered the main gates of the event in al-Qamishli, people altogether hurried to welcome them. Young women shouted, “Long Live the YPJ Resistance”, while the elders ululated and threw over them dried rice, signifying a warm welcome to loved ones in Syria’s Kurdish region.

Jairan Sami’, mother of two YPJ fighters, said, “I am rally happy to see my two daughters return on this day. I am unable to describe that happiness especially when they have been in the frontlines for months now. When I see how people welcome them and appreciate their fight, I can not stop my joyful tears.”

Many of the mothers, friends and colleagues of the women fighters at the event were similarly ecstatic seeing their loved ones, who for the past months have been stationed in the frontlines of Tal Barak and Tal Hamis provinces fighting various Islamic rebel forces, most notably the al-Nusra Front and Islamic State of Iraq and al-Sham (ISIS).

YPJ Spokesperson Ciya Efrin went on the stage to read out a statement on behalf of all the battalions present. “It is true that we Kurds, Christians and Arabs in the autonomous cantons have been regularly attacked by the dark forces that use every means of atrocious sadism in the name of holy Islam. They bomb our local markets, institutions and public places, they are not Muslims because only cowards and terrorists kill civilians to achieve political objectives not real Muslims.”

She went on to directly accuse both the Ba’ath regime as well as the Islamic opposition groups for undermining women’s rights.

“We should remember, however, that there is a strong resistance here in our autonomous cantons led by women against both the extremist forces as well as an autocratic machinery that for the last 40 years oppressed its own people, women included,” she said, adding that women rights can only be achieved when women lead political struggle and determine their own destiny.

“We, the free women of this region in Syria, do not wait for anyone to give us our rights. We achieve it by our own struggle, sweat and blood. Free women means free peoples and a free society. So hail women’s freedom and long live international women’s day.”