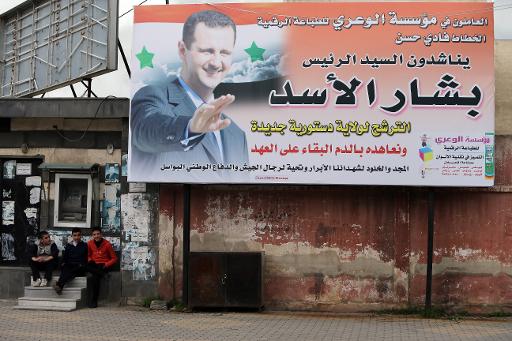 In the heart of Syria's devastated city of Homs, once hailed as the "capital of the revolution," President Bashar al-Assad looks down from a banner calling for his reelection.

“Because you are a symbol of our victory and our resistance, we implore you to be a candidate for the presidency,” reads the caption beneath the smiling Assad, whose family has ruled Syria for more than four decades.

In the early months of Syria’s uprising, Homs was the epicentre of peaceful mass protests sweeping the country. Three years on much of it lies in ruin, with small pockets of rebels clinging to a few besieged neighbourhoods.

But in pro-regime neighbourhoods the campaign for Assad’s reelection has begun, despite the fact that he has not yet announced his candidacy.

A constitution adopted in 2012 for the first time opened the door for candidates to challenge Assad in the election, scheduled to be held before June.

In pro-regime neighbourhoods the campaign for Assad’s reelection has begunBut a law adopted by parliament on Thursday requires candidates to have lived in Syria for the past 10 years, thereby excluding the exiled Western- and Arab-backed opposition.

It’s unclear how an election can be held in the middle of a raging civil war that has killed 146,000 people and displaced an estimated 40 percent of Syrians from their homes.

But a few blocks away from the Assad banner, signed “Family Restaurant,” another banner announces that the employees of Al-Waari digital printing and its calligrapher, Fadi Hassan, implore Assad to run.

“We promise with our blood to be loyal to you,” it proclaims.

“Symbol of our victory”

The authors of the banners insist they are acting on their own without government pressure.

“When we heard the president say he will run in the election if the people want it, we decided to hang these posters, because he is a symbol of our glory, our pride and our victory,” says Samer Johar, 43, of the Family Restaurant.

Assad still enjoys support among a significant part of the population fearful of the rebels, who count powerful jihadist groups among their ranks.

Samer, who arranged the hanging of 15 banners throughout pro-regime neighbourhoods, says Assad is the only candidate who can bring stability to Syria after three years of war.

“If he leaves his post there will be chaos,” he says, adding that seven of his cousins have been killed in the war and an eighth has disappeared.

His views are shared by Issa Youssef, a Christian from Mechref, a village near the Lebanese border.

“All of us, men, women and children, have lived in security under the authority of President Assad and we hope he will be reelected another two or three times,” the 50-year-old driver says.

For the external Western and Arab-backed opposition, as well as the fighters on the ground, Assad’s exit from power is non-negotiable.

And Ahmad Jarba, head of the opposition National Coalition, has called for the UN Security Council to press the regime to scrap the vote.

The opposition and rights groups have accused Assad’s regime of atrocities, from the torture and killing of political prisoners to indiscriminate bombing and keeping food and medicine out of besieged rebel-held areas, leading to deaths from starvation.

In the devastated Old City of Homs a few hundred rebels are still holding out despite being under an army siege for 20 months that was only lifted for a week-long humanitarian mission last month.

“These slogans are made in areas controlled by the regime against the will of the people who live there,” said Thaer al-Khaldiye, a 25-year-old resident of the Old City reached via the Internet.

“It is impossible to accept Assad after what has happened to us and our families… We will organise demonstrations to express our opposition.”