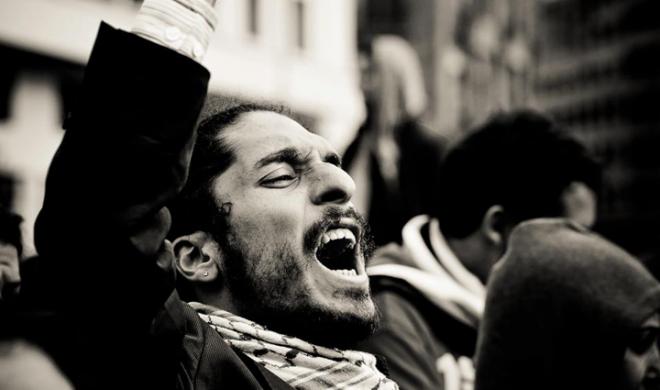 A growing number of Arab men are not only championing the rights of women but also challenging traditional ideals of masculinity.

Sexual harassment in Egypt has reached such epidemic proportions that it has even infiltrated the campus of the country’s oldest secular university. At the heart of this plague, I have argued, are toxic, unrealistic and demeaning gender ideals and stereotypes.

In recent years, and especially since the eruption of the Egyptian revolution in 2011, women have been rebelling against the conservative current that has swept across the country starting from the late 1970s.

This has provoked a massive conservative backlash, of which increasingly violent sexual harassment and humiliation are one manifestation. But what is lost, even drowned out, by this tidal wave of misogyny are the men who have chosen to swim against the current, and not only champion women’s rights but also to challenge traditional concepts of masculinity.

And this male awakening is not just focused among the intellectual and economic elite but has made in-roads across the country and in every strata of society.

Take David Esam, who was raised in a traditional household in al-Minya, which lies in Middle Egypt, the entry point to ultra-conservative Upper Egypt.

“At first, I didn’t think that women had rights. I just viewed them as complements to a man’s life,” he confessed to me.

A number of factors combined to set in motion a major shift in Esam’s attitudes. One was his sister, and specifically a quarrel they had over the restrictions his mother imposed on his sister’s freedom.

Another factor was the books he started reading, including the writings of Egypt’s foremost living feminist Nawal al-Saadawi. But perhaps the most critical factor has been the friendships he has made since the Egyptian revolution, which triggered an earthquake in Esam’s consciousness and conscience.

“Encountering young women and men interested in the women’s cause made me more self-aware and critical of my surroundings,” observes Esam, noting that he is now active in promoting social and legal rights for women and volunteers in the movement combatting sexual harassment.

Although the revolution has awoken the consciousness of a new generation of men, this new Arab man is actually not new at all. In fact, possibly the Arab world’s first feminist, which was unsurprising in the male-dominated society at the time, was a man.

“Throughout the generations our women have continued to be subordinate to the rule of the strong and are overcome by the powerful tyranny of men,” Qasim Amin wrote in The Liberation of Women in 1899. “The inferior position of Muslim women is the greatest obstacle that prevents us from advancing toward what is beneficial for us.”

Many secular men raised before the spread of Islamist conservatism actually take gender equality for granted, at least in principle. And there are some who implement it almost religiously.

“I have two children, a boy and a girl, whom I treated equally, in terms of upbringing, pocket money, responsibilities, duties, schooling and self-respect,” says Said El-Said, a retired Palestinian professional who has been based in Switzerland for more than 35 years. “I talked to both of them about sexual responsibility and gave each a box of condoms when I felt the time was right.”

Some are bound to attribute El-Said’s attitudes to his long sojourn in Europe, but he insists that nothing could be further from the truth. “Thanks to my parents, specifically my father… I never accepted how women were treated in the Middle East,” he explains.

And others of his generation, especially those raised in leftist households, have similar recollections. Suad Amiry, the prominent Palestinian architect-turned-author, recalled how her father treated all her siblings equally to the extent that he bucked even the most deep-rooted conventions.

“He called himself Abu Arwa, so many people didn’t think we had a brother called Ayman,” Amiry remembers. “He named himself after his eldest daughter and not after the boy.”

Of course, the Levant, especially Lebanon, has a relatively enlightened attitude to women. But even in the most conservative quarters of the Arab world are experiencing their own version of a male awakening, albeit from a lower starting point.

It is perhaps unsurprising in light of the severe restrictions on Saudi women, such as the repressive guardianship system, that one of Saudi Arabia’s most prominent advocates of women’s rights is actually a man.

In what was a watershed case for women’s rights in the kingdom, the lawyer and human rights activist Waleed Abulkhair successfully secured the release of Samar Badawi, who had been imprisoned for disobeying her abusive father.

Contrary to popular opinion and the “reformist” image the Saudi royal family attempts to project abroad, Abulkhair holds the regime responsible for the poor status of women.

“The political establishment is to blame for all these restrictions, but it blames society which it describes as ‘unreformable’,” he says. “But in reality, the establishment wants society to remain conservative and for men to continue to dominate women, thereby neutralising half of society, while making the other half easier to control.”

For this reason, Abulkhair sees women’s rights as intimately, and holistically, connected to the wider struggle for human rights.

“Everyone here is repressed and we don’t want an equality of repression,” he claims. “In my view, the Saudi woman’s problem is not with men but with the system.”

Abulkhair is convinced that if the Wahhabi establishment would take a neutral stance towards personal rights and leave people to decide for themselves, then women’s rights would take a giant leap forward in Saudi Arabia, especially in the west of the country. “Where I live, in Hijaz, the majority believes in respecting women and upholding their rights, and this was more apparent before the spread of Wahhabism at the hands of the authorities.”

Unsurprisingly, Abulkhair’s activism has not endeared him to conservatives and has got him into hot water with the authorities. Throughout all his legal battles, detentions and the travel ban still in force, he has found a willing accomplice, defender and champion in the form of his wife, Samar Badawi. Since Abulkhair represented her, Badawi has become a prominent activist in her own right, filing the kingdom’s first lawsuit for women’s suffrage and involved in the women’s driving campaign.

“I enjoyed aspects of it like learning how to cook, reading more, reflecting more on life, thinking of doing my own business, staying with my kid more.”

Despite all the challenges and difficulties, Abulkhair is upbeat about the future. “The current situation indicates that (Saudi) women are on their way to gaining their rights due to the enormous changes society is undergoing,” he concludes.

Some fear that the reverse may be true in Arab countries where women have already wrested significant rights.

“In general, the status (of Palestinian and Lebanese women) is regressing, with the rise of religious fervour,” believes Said El-Said. “I blame mothers for perpetuating the tradition of the ‘boy prince’ at the expense of their daughters.”

And David Esam’s own experience reflects the challenge of dealing with the role of women as gatekeepers of the patriarchy.

“My mother is happy with the love, care and attention in my relationship with my sister,” he explains. “But she does not approve of some of my positions encouraging my sister to pursue her interests in work, travel and friendships at university.”

There are others who, bucking social convention altogether, have moved beyond simple equality to engage in role reversal. Omar Weheba is a case in point.

After a period of forced separation from his wife who was working in Geneva, he decided to throw tradition to the wind and quit his job in Cairo to become a trailing spouse, despite his family’s conviction that “it was important that the man take the lead”.

“Being a stay-at-home dad was a first for me,” he admits. “I enjoyed aspects of it like learning how to cook, reading more, reflecting more on life, thinking of doing my own business, staying with my kid more.”

Although Weheba has now found a job in Geneva, his time as a home-carer has instilled in him a greater appreciation and respect for the traditional role ascribed to women, and he still shares in the child-rearing and housework.

Despite the turbulence Egypt is going through and the conservative and religious backlash unleashed since the revolution, Weheba is hopeful about the future of gender equality.

“I am optimistic about the younger generation… They are more flexible and malleable to change,” he argues. “I believe many realise that there is no clear-cut traditional role anymore for a man or a woman. What they know is that it’s best to work together… to better their society and move it forward.”