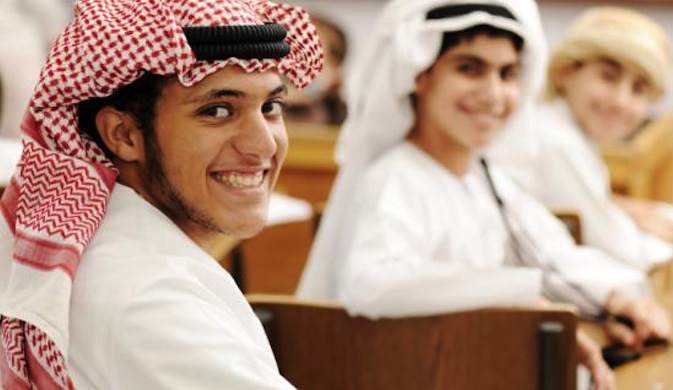 Although ties between Saudi Arabia and China emerged relatively late, today, the relationship has developed well beyond diplomatic, economic and political affairs. A strong focus on culture, technology and education might bring them into a new level of engagement.

Despite the fact that little has been documented on the figures of students in both countries, it is believed that the number of students going to study overseas from Saudi Arabia to China, or vice versa, has been increasing recently. According to a report published in 2011, there were approximately 1,100 Saudi students enrolled in different universities in several cities across China, and the number is expected to be higher this year.

Meanwhile, the Chinese government is encouraging their students to seek knowledge at Saudi universities. It was reported that there are 270 Chinese students enrolled in a number of universities in Saudi Arabia, among them approximately 200 students and teachers in King Abdullah University of Science and Technology (KAUST). Estimates show that the largest single national representation in KAUST, excluding the Saudis, is in fact the Chinese.

According to research conducted by a Saudi graduate from Georgetown University in Qatar, Mohammed Al Sudairi, several major Islamic colleges in the Kingdom offer opportunities for Chinese Muslim students to pursue Islamic studies in Saudi Arabia. Historically, the story of Chinese Muslims studying in Saudi Arabia has not been widely documented. However, it is widely known that Chinese Muslims have long attended Islamic circles under prominent Muslim scholars in the Kingdom. Take for example Ma Wanfu, a Chinese Imam from Linxia who went to study Islam in Mecca in the 19th century.

Beijing’s interest in strengthening its educational relationship with the Kingdom over the past few years can be seen by the participation of several Chinese institutions in the International Education and Conference on Higher Education held in Riyadh annually. Saudi Arabia also participates in an exhibition on education in China to provide prospective students from China appropriate information regarding opportunities to study in the Kingdom.

A Chinese Imam from Linxia went to study Islam in MeccaNaser al Tamimi wrote that Saudi Arabia has established a number of Chinese language study programmes across China. Some of them are dedicated to prepare Saudis to work at Jizan Economic City, where Beijing’s proposed investments in aluminum production and other industries will be situated.

In order to fortify their relationship, a number of agreements and treaties pertaining to education and research have been signed by the governments of China and Saudi Arabia. In 2011, a Saudi delegation from more than twenty higher institutes, led by the education minister, visited the Chinese capital. During the visit, these universities signed ten agreements with different Chinese institutions. Soon after this visit, Chinese delegations constituting several universities also made a visit to the Kingdom. In his visit the following year, Zhang Ping, the chairman of the National Development and Reform Commission of China, signed an agreement between Beijing University and King Abdulaziz Public Library (KAPL). This agreement will expand the cooperation between the two institutions as well as to allow KAPL to set up its branch in China.

KAUST has reportedly signed an MOU with HUAWEI Technologies, China’s prominent telecommunication company, for telecom technology and personnel trainings. Indeed, scientific links between two countries are also booming. The Gene Institute of the Chinese Science Academy is cooperating with the Saudis on alleviating the gene of Saudi Palm.

Nasser al Tamimi reported that Beijing and Riyadh have signed different treaties in nanotechnology, metereology, and other areas of technology and science.

What is particularly interesting is that the Saudis have struck an agreement with its Chinese counterparts on the development and the use of atomic energy for peaceful usage. The cooperation, inked in early 2012, aims to enable cooperation in fields such as development and maintenance of nuclear power plants and research reactors, manufacturing and supply of nuclear fuel components.

In 2009, a deal was made between the Saudi Ministry of Education and the China Railway Construction Company (CRCC) to construct nearly two hundred public schools across the Kingdom. The Saudi Fund for Development (SFD) also signed an agreement to provide a loan of $25 million to help a school project in Tianshui, a city in Gansu province. This agreement was made in 2008 and was used in building laboratories, classrooms, libraries, as well as student hostels. This was not the first time the Kingdom participated; the SFD began its cooperation with the Chinese in 2002 and has provided many forms of assistance to education projects across the country.

China’s cooperation with Saudi Arabia in the field of education has grown throughout the last couple of years. While stimulating cooperation is not a simple process, through the use of scholarships, exchanges, exhibitions, and aid, the bonds between Beijing and Riyadh have expanded to spheres far beyond that of only education.

China’s rapidly increasing energy needs, combined with the economic decline in the United States and Europe, may lead China and Saudi Arabia, as well as other countries in the Gulf to enter a new level of engagement.