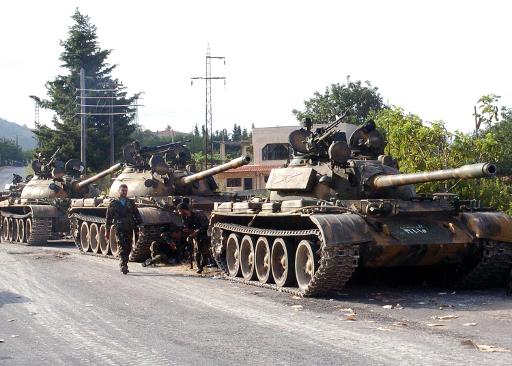 “Syrian army units have full control of Observatory 45 in the north of Latakia province and are continuing to pursue terrorist groups,” the state broadcaster said, quoting the military.

Observatory 45 is a strategic hilltop that overlooks several areas inhabited by residents from the Alawite community, the religious sect to which President Bashar al-Assad belongs.

State television reported live from near the site and broadcast pictures of dead bodies it said were “terrorists,” many of them foreigners.

Last week, the rebels seized the position as part of an offensive launched on March 21 in Latakia province, which had been relatively untouched by the widespread violence elsewhere in the country.

Rebel forces, including jihadists from the Al-Qaeda-affiliated Al-Nusra Front, have also captured the Armenian town of Kasab and the nearby Kasab border crossing with Turkey, as well as the village of Samra, giving them access to the Mediterranean for the first time.

More than 300 people on both sides have been killed since the rebels launched their offensive, said the Syrian Observatory for Human Rights.

“The army has managed to install multiple rocket-launchers on Observatory 45, but fighting in continuing in the vicinity of the hillside,” said the monitoring group.

After a series of rebel losses in Damascus province, the opposition has shifted its focus to Latakia, where the army and pro-regime militias have rallied to defend the area.

On Monday, opposition forces fired Grad rockets at the Bassel al-Assad airport for the first time.

The civilian facility is named for a deceased brother of the president and is near the town of Qardaha, the Assad clan’s ancestral home.

Assad’s father Hafez al-Assad, who preceded as president, is buried in Qardaha.

The conflict has become more complex with rebels once allied in their bid to topple the regime now fighting against each other.

In the past 10 days, fighters from the Islamic State of Iraq and the Levant (ISIL) have been locked in battle with fellow jihadists from Al-Nusra Front in the northeastern province of Hasakeh.

The Observatory said the death toll from the fighting has risen to 120, after fierce weekend clashes for control of Markada, a town on the border with Iraq, where ISIL has its roots.

ISIL seized on Saturday the town which lies on a key route through which the jihadists obtain supplies from Iraq.

Syria’s conflict in now in its fourth year, and more than 146,000 people have been killed since it began.