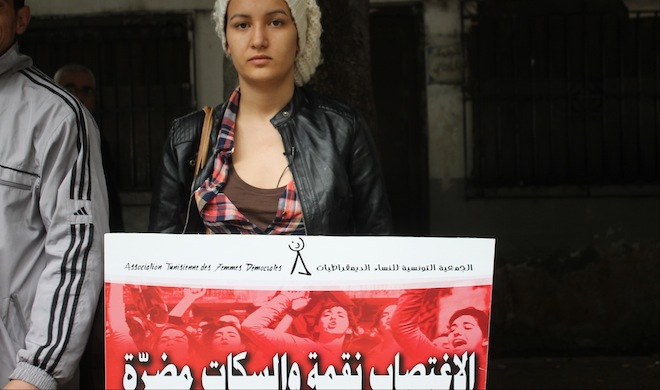 Defenders of Myriam, the Tunisian girl who was raped by three policemen, have mixed feelings after Monday's trial. They claim the victim is still getting the blame.

On Monday the 31st March 2014, the Court of First Instance of Tunis witnessed the last episode of the trial of three policemen who raped a young Tunisian woman known under the name of Myriam Ben Mohamed (for details read my previous article).

A huge call to support Myriam has circulated on social networks for more than a week and hundreds of Facebook users confirmed their attendance to a support action planned by the Tunisian Association of Democrat Women. Nevertheless the disparity between that (online) number and the number of persons actually present outside the court was huge.

Outside the court we were a handful of people, mainly women, to defy the bad weather, the rain, the police arrogance and other insults targeting us in particular and women in general.

The trial lasted for hours. And the lawyers seemed very nervous. The three policemen denied the charges and accused Myriam of sexual advances. But after a whole day of defense speeches and interrogations, the court sentenced two of the policemen to seven years in prison. The third was sentenced to two years and a fine of 20,000 dinars for deliberately trying to bribe a public worker. For Myriam’s lawyers and her supporters the sentence was unfair.

“Outside the court we were a handful of people, mainly women.”Emna Zahrouni, one of Myriam lawyers, wrote on her Facebook profile:

“I am haunted by a profound sadness and bitterness after the announcement of the verdict against the policemen who raped my client. The problem lies in the message conveyed by the justice through this sentence. What do they mean with these 7 years?  Indeed a message is conveyed to my client and the majority of Tunisian women: Going out with a man in the middle of the night is considered as extenuating circumstances for the perpetrators. A woman who goes out in the middle of the night should be ready to face the institutional violence targeting her starting with the assaults of policemen and ending with pseudo trials of a pseudo justice …

I am sorry for a society that is so proud of its aberrations.”

On his part, Martin Pradel, a French lawyer who defended Myriam from the very first day, wrote on his Facebook profile:

“Yesterday I was so proud to plead alongside Radhia Nasraoui and Emna Zahrouni but one can’t have anything but mixed feelings following the verdict announced by the criminal court of Tunis that convicted the policemen charged of Myriam’s rape.

I have mixed feelings…the rape has been recognized while the hearing showed that she was still accused as the one to blame. I also have mixed feelings because the seven-year in jail sentence for such a crime suggests that the policemen received extenuating circumstances, which is unacceptable.”

In essence, the lawyers felt the punishment should have been much harder. Which is not uncommon in Tunisia. And while it is true that the policemen have been convicted for the rape crime that they committed, the mitigating circumstances granted to the criminals and the different aggressive reactions targeting Myriam are of major concern.

The rape victim is still perceived as the one to be blamed. The majority of rape victims as well as their families prefer not to complain to avoid “scandals” and “shame.” Many men think that women are the ones to blame in rape cases because of their provocative clothes or simply because they are going out in the middle of the night. For them the arguments to justify rape are abundant.

“We will keep on fighting,” concluded Myriam’s lawyer.