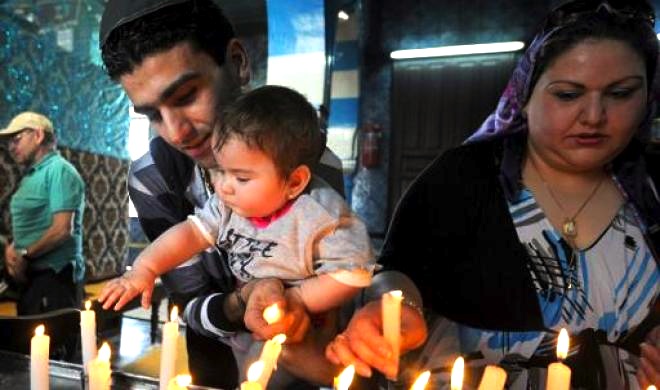 When the hugely popular Egyptian TV host used scholar Ben Judah's work in a local newspaper, things quickly got out of hand.

This week I wrote a piece for Index on Censorship about hundreds of horrific anti-Semitic tweets directed at Ben Judah, a Fellow on the European Council of Foreign Relations, writer and expert on Russian affairs. He is the author of Putin’s Fragile Empire: How Russia Fell in and Out of Love with Putin. The tweets all originated in Egypt, where one in four Arabs currently reside. Judah has never travelled to nor written about Egypt.

The racism arrived after an article Judah wrote for Politico magazine was flagrantly plagiarised by an Egyptian TV star. A translated version, with no credit given to Judah, was published a local newspaper, credited to Dr. Bassem Youssef.

Youssef, a hugely popular and controversial TV host, has an audience in the millions, and over two and a half million Twitter followers. Once his plagiarism had been busted, Youssef tweeted that he had cited Ben Judah’s work at the end of his piece, but that editors had not include this in the final version.

Youssef’s huge Twitter audience then picked up on Judah’s Jewish name. He was targeted by hundreds of anti-Semitic messages for several days, including pictures of Nazi symbols and references to Israel.

He was targeted by hundreds of anti-Semitic messages“Isreal (sic) under my shoes holocaust b***h lol hitler b***h hahahaha if I were hitler I will burn u all,” said one Cairo-based user. Another from Cairo: “Jews curse of God on Earth.” And one from Mansoura wrote, “I will f**k your family one by one.”

“Regarding the Twitter rage: I am from a family of Holocaust survivors, so it did not surprise me such hatred of Jews exists.”

Judah believes that the majority of the abusers were “middle class English-speakers in Cairo.”

“The whole experience reveals the scale of racial hate in the Arab world towards Jews,” he added.

Judah admits he is no expert in Middle Eastern affairs. But is his analysis correct? And where does anti-Semitism in the Arab world come from?

In 1945 there were 800,000 Jews living across the Arab world. Today, there are fewer than 8,000. Like Christians in the Middle East, who have seen their numbers drop from 15% to 5% in the last hundred years, the last fifty years saw many Jews move to Europe, the US, or Israel. The higher breeding rate of Muslim families also contributed. The beginning of the exodus correlates roughly with the establishment of the state of Israel in 1948, suggesting that Arabs’ persecution of Jews has also been politically or morally motivated.

Nowadays, over 89 percent of the citizens of Egypt, Lebanon, and Jordan have a “very unfavorable” opinion of Jews—only a tiny percentage chose “somewhat unfavorable,” and even fewer “favorable,” according to public surveys cited by Daniel Jonah Goldhagen in his book The Devil That Never Dies. He points out that just 2% of Lebanese have a “very unfavourable” view of Christians.

It is worth noting that in the previous centuries, the Jewish experience in the Middle East had been very mixed – somewhere between folkish prejudice and Koranic reverence. Aomar Boum writes in Tablet that although often valued as informal go-betweens between rival Arab and Christian groups, Jewish men were the only males permitted to be alone in the presence of a Muslim woman, signifying their weaker male status.

The moderate view is that Prophet Muhammad was extremely respectful of Jews. Politically he acted as an arbiter between rival Jewish and Muslim groups in seventh century Medina, creating a constitution which guaranteed equality for both. The Koran demonstrates respect for Jewish rituals: when trying to make rain, success arrives only when Muhammad invites local Jews to pray with him.

In fact, while Arab opposition to Jews was clearly widened as Israel was established, anti-Semitism in the Arab world far pre-dates 1948. It had been imported from Europe a century before, when French colonialists arrived and began to dominate. Their objections to Judaism were built on Christian quasi-theology which rejected Jewishness because of Judas’ betrayal of Jesus.

By the time colonialism arrived, Jews status has admittedly been reduced in most Middle Eastern states, but protections against prejudice were still enshrined in local laws. This had not been the case in Europe, where anti-Semitism had been popularly accepted for a thousand years. Despite the Holocaust, the continent is still a hotbed of anti-Semitic thinking.

The Italian-Jewish journalist and writer Oriana Fallaci was a piercing journalist and practitioner of eloquence. She interviewed Yasser Arafat back in 2002, four years before she sadly passed away.

“Sure you (Europe) have to pay your debts to (the Jews)” Arafat argued. “And you want to pay them with our blood, our land rather than your blood, your land.

“You go on ignoring the fact that we have nothing against the Jews, we have it against the Israelis. The Jews will be welcome in the Palestinian state. We’ll offer them the choice of staying in Palestine when the moment arrives.”

Excluding anti-Semitism, the persecution of Jews in the Holocaust in Europe remains a politically controversial point in the Middle East. Many Arabs say the Holocaust was cynically used as leverage to steal Israel from the Palestinians.

“Persecution of Jews in the Holocaust in Europe remains a politically controversial point in the Middle East”Jews were the single largest group targeted by Hitler, but many others also died, including Slavs, the disabled, homosexuals and the Romani, as well as two and a half million gentile Poles. Zionist groups regularly portray attempts to memorialise these groups as anti-Semitic.

If you consider that homosexuals are only just being given the right to marry, the racist treatment of Romani people is still prevalent across the EU, and that the disabled have been targeted for cuts in welfare in the UK, it would seem the other targets of Hitler’s wrath have not done as well as Jewish survivors.

Meanwhile, the state of Israel has grown rapidly, becoming the 25thlargest economy in the world. It is second globally (after the US) for venture capitalism. It has the largest number of startups in the world and the highest living standards in the Middle East, where it has leapt to being the fifth largest regional economy.

The establishment of Israel after the Second World War is clearly interlinked with the Holocaust, and how it was dealt with by the international community. Modern Israeli nationalists frequently warn of another international conspiracy to exterminate the Jews of Israel. Much of the support stemming from the US has been based on a powerful Jewish-American business lobby.

But while Washington continues to support Jerusalem, international opinion in defence of Israel is shifting. This often has little to do with anti-Semitism. The mounting hysteria in op-eds of the Israeli mainstream and financial press now suggest a creeping realisation that the Boycotts-Divestment-Sanction movement will soon become a significant economic threat. The Palestinian cause, and oppression by Israeli forces, has been key to raising the profile of this campaign. It is worth noting that the Arab world has had a near total boycotts, divestment and sanction policy against Israel for years.

DON’T MISS Laila crossed Israeli checkpoints. This is what happened.

But critiques of Israeli policy, which might rationally be underpinning the Arab boycott of Israel, lose all their thunder if anti-Semitism makes an appearance. “ Jews” is casually used by many observers in place of “Israelis” or “the Israeli government.”

Ben Judah remains indignant at the horrific abuse he received. Though he publically offered a peace branch to Dr. Youssef (despite not receiving any apology himself), his final words about the matter are ever so slightly cattish.

“Even British-Jewish Russia experts, who have never been to Egypt, and have nothing to do with the Middle East, are subject to abuse.”

His tone is very understandable given the circumstances. He is a world expert on Russian relations, facing down an army of bigoted stay-at-home Twitter trolls who confound their own political arguments about Israel by resorting to gutter racism.