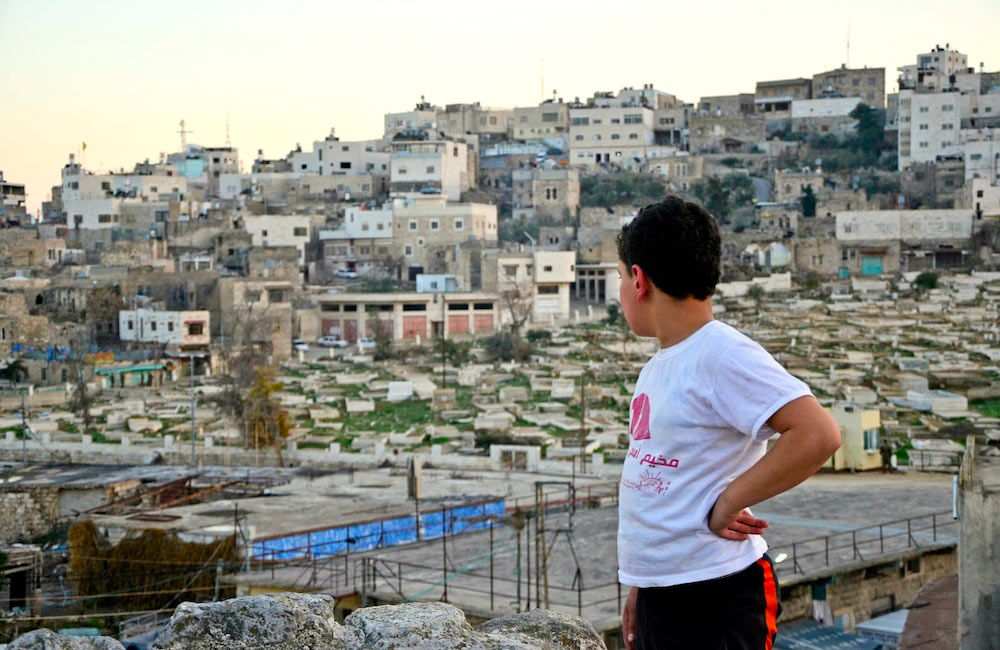 Johannes Makar travels to Hebron and discovers a city that has become breeding ground for bullying tactics.

This February, after crossing the Taba-Eliat border from Egypt, less than 36 hours before the deplorable bomb attack there, I arrived in Jerusalem. After spending a couple of days in the city, I hopped on the bus to Hebron from the Israeli Central Bus Station. The contrast with the Palestinian public transportation that I used on my return trip could not have been greater. Here, two to three inch thick bulletproof windows and heavily armed soldiers accompanied me, amongst pious settlers and fellow devout Jews.

Upon arrival at the bus stop in Hebron, I found myself in front of an impressive historic structure that happened to be the celebrated Cave of the Patriarchs. The latter, a sanctuary home to the tombs of Abraham, and his wife Sarah, is valued by Jews, Christians and Muslims. According to the Holy Scriptures, those lay to rest here are considered the ‘founding fathers’ of the Abrahamic monotheist tradition. Inside, the Cave of the Patriarchs is divided into a Muslim and Jewish prayer hall. Historic ornaments, opulent Arabic scriptures and a genuine tranquility contribute to a unique sense of serenity.

When exiting this sacred structure, however, I am instantly confronted with a different reality. Israeli security personnel, heavy arms and the prospect of yet another possible checkpoint make the holiness of this place vanish in no time. Minutes later, simply asking a soldier if I am allowed to take a picture ends indispensably in the question if I am a Jew. Slightly scorned by his inquiry, I present him a negative answer after which I’m nonetheless allowed to realize my Kodak moment.

“Upon arrival at the bus stop in Hebron, I found myself in front of an impressive historic structure”             After leaving the site from its nowadays Jewish flank, I decide to take a look in the part of the Old City that falls under the control of the Israeli authority (known as “Area H2” in the James Bond-themed jargon of the politicians of our world). While searching the entrance to this part of the city, I stumble upon a security passage of the Israeli Defense Forces. On top of the gateway is a sticker that has the Arabic expression “ma sha Allah” literally meaning “what God wants”; a saying often used to express one’s thankfulness. After crossing the gateway myself, I arrive into the heart of what was once a sparkling bazaar. While wandering through the historic alleyways of this old market, a majority of the shops appears to be closed. The lack of commerce brings in a desolate and cool atmosphere.

Yet, it’s only when looking more attentively that I notice the first scars of the political squabbles in this part of the city. The iconic green doors that lock many of the little boutiques are sporadically customized with graffiti paintings, depicting either the Star of David, some obscure Hebrew writings or reactionary Arabic tags. The alleyway itself is partially roofed with wires and fences. On top of these lay – quite awkwardly – large pieces of dirt and garbage. When asking the young Badr about this, he explains that the fences are meant to protect against the settlers in the city who occasionally dump their waste on the rooftops and streets of the Palestinian inhabitants.

Shortly after starting our chat, the fourteen year-old boy offers to show his house in what seems to be a common invitation to visitors of the city. Upon climbing the outdoor staircase of his home, I am once again confronted with tinkered fences and barbed wire.

DON’T MISS We take a good look at anti-Semitism in the Arab World.

Once I arrive on the roof of Badr’s home, I end up startled by the view over Hebron. At the seemingly highest point of the city stands a massive watchtower with an equally huge menorah next to it. The upper platform of the watchtower resembles something of an all-seeing eye. In other parts of Hebron, nosy spectators are evident as well. Throughout the whole of the city Israeli forces stand guard on rooftops, and next to Badr’s place too is a small ‘security tower’.

Another visible feature seen from the rooftop is the upsurge of modern housing in the city. Rather than being part of a social housing system for many a needy Palestinian, these alluring homes are destined to accommodate some of the settlers in the city whilst, of course, providing them the necessary security services.

Before going down again, Badr shows me the bullet holes in what is now a dysfunctional water barrel, a gift his family once received from Italian donors. Inside his living room too damage is visible. Badr himself claims it to be the outcome of a raid by Jewish settlers.

ALSO READ Keep Your Eye on the Wall: Palestinian Landscapes

The story of Badr and his family seems illustrative for the situation in Hebron; a mix of far-reaching bullying practices (that undoubtedly go beyond what I witnessed shortly) and constant interference by the IDF alternate, making it impossible to live a life that resembles any real sense of normality.

Finally, as I arrive at the main square, I discover another massive control post. This one too is supplemented with a fair amount of Israeli soldiers. At least a dozen of them. Here, suddenly, a sound of gunshots is heard, persisting for almost 20 minutes. I decide to continue my walk, yet when passing one of the soldiers, the carrying message “take care for the Palestinians, they’re throwing stones” is revealed to me in a bittersweet American accent.