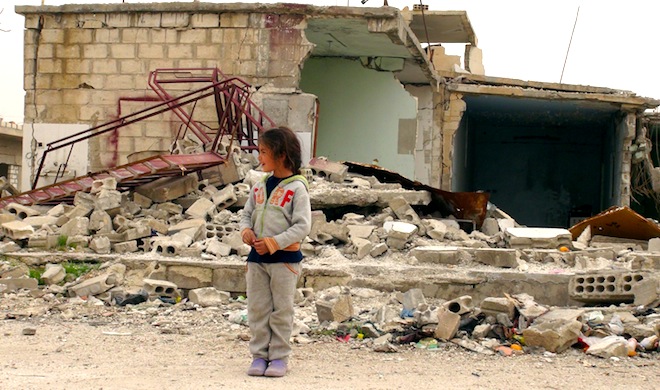 Intense onslaughts by jihadists and Assad’s regime against the Kurds have endured for weeks across northeast Syria, the reason being the Kurds say, “We reject both the regime and jihadist rebels.” Your Middle East spoke with both Kurdish and jihadist fighters.

An attack by two suicide bombers of the Islamic State of Iraq and al-Sham (ISIS) that shattered the newly established autonomous city council of al-Qamishli on 11 March 2014 and killed 10 Kurdish civil servants, marked a new bloodstained chapter in the Kurdish diary amid Syria’s civil war.

The day after, on 12 March, while thousands of mourners gathered in al-Qamishli to condemn the ISIS attack, gun fighting broke out in a regime-controlled area and Assad’s soldiers killed a member of the pro-Kurdish People’s Defense (Protection) Units (YPG).

12 March was a symbolic day for Syria’s Kurds this year, as it marked the 10-year-anniversary of the 2004 Kurdish uprising against the Ba’ath regime.

“Time and place of the consecutive attacks are highly important. The city council politically represents Kurdish autonomy and 12 March is a historic day in the Kurdish struggle against the regime, so the attacks were clearly warnings sent by Assad and ISIS against Kurdish self-rule in Syria,” said Muhammad Hassan, a Kurdish journalist based in al-Qamishli.

“Time and place of the consecutive attacks are highly important”“Kurdish calls for decentralization rapidly growing in Syria politically and militarily threatens both regime and jihadists,” he said.

Heavy clashes, bombardments and suicide attacks have since targeted almost every Kurdish city and town in Syria.

Intense clashes have escalated in recent weeks mainly between ISIS-led jihadists and YPG forces in the cities of Kobane (Ain al-Arab) and Serekaniye (Ras al-Ain).

The YPG captured the village of Tal-Xanzir in west Serekaniye, an ISIS stronghold. Nonetheless, heavy fighting continues to intensify in Tal Abiyad, Gre Sor and Yarko. Although YPG is said to still hold the ground in Jaz’a and around Tal Hamis near the Iraqi border, ISIS offensives persist.

Hundreds of jihadist fighters have been killed, among them two prominent non-Syrian ISIS Emirs, Abu Yusiv al-Tanfizi and Adam al-Shishani.

Frequent car bombs targeting the Kurdish cities and towns have killed half a dozen.

“We are attacked from all sides, the only reason being, we are for democratic self-rule of all peoples in Syria and reject both Assad’s regime and the model jihadists are offering,” said Leyla Xelef, spokesperson of the Kurdish Tirbespi People’s Council.

“To live in the face of death, we have no choice but to fight and resist,” she said.

On the 67th anniversary of the Ba’ath Party foundation on Monday 7 April, thousands of Kurds took to the streets of al-Qamishli to condemn regime attacks and dubbed the day: “Anniversary of the birth of fascism.”

The ISIS says they fight Kurds because, “YPG Kurds are infidels.”

YPG says they fight “to defend the people, land and honour.”

Abu Haizm al-Saif, who is an ISIS commander in the outskirts of Kobane, agreed to give a brief interview over the phone.

“Kurdish women fighters have no veils and hijab and yet claim to be Muslims”“We are fighting a holy war against all enemies of God in Syria and YPG Kurds are unholy given that their politics and way of life are entirely against the wills of Allah,” he said after reciting a Quranic verse in the telephone interview.

“Kurdish women fighters have no veils and hijab and yet claim to be Muslims. Well, they are acting against Allah’s words. No matter how often they claim to be Muslims, they are not,” said al-Saif insistently, adding that the Kurds are “infidels” also because they “promote secularism.”

“The so-called ‘Kurdish autonomy’ and whoever assist them, openly stand against implementation of Sharia Law in Syria. We therefore consider them infidels and enemies of God, as they are secularists just like the devils, Assad and Western infidels. And, no jihadi fighter should have mercy upon infidels,” he added, authoritatively.

The YPG says despite the fighting in the outskirts, jihadists indiscriminately attack civilians inside the Kurdish cities.

He added: “Despite the causalities, jihadists are being defeated here because all Kurdish men and women have now taken up arms to defend themselves, their land and their honour. Every Kurd understands now that we no longer face a political warfare, in order to live, we have no choice but to win against the jihadists.”

It is too early to foresee the consequences of the battle, but if the Kurds win this time around, then no doubt they would forever change the political equation in northeast Syria and eventually force their enemies to an unprecedented compromise.