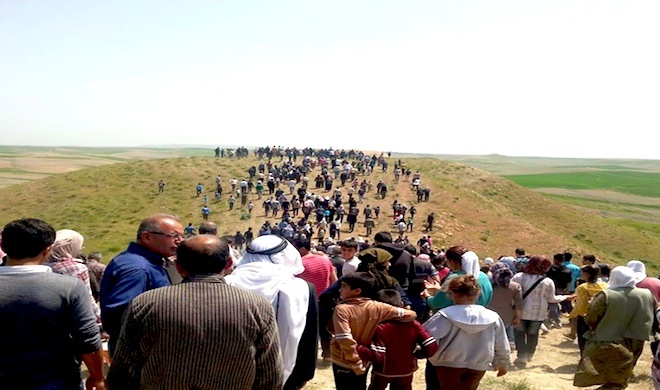 Protests, unrest and hunger strikes across the Kurdish regions in the Middle East condemn the ruling Kurdistan Democratic Party (KDP) of Iraqi Kurdistan for digging a 30km-long trench on its borders to further blockade neighbouring Kurds in Syria.

The KDP in Iraqi Kurdistan openly stands against Kurdish-led autonomous canton governments in northeast Syria, shutting its borders last year to impose an embargo and now digging a trench to entirely block crossings with Syria.

Syrian Kurdish journalist Rodi Muhammad Amin first broke the news of the trench digging on Iraq-Syria border earlier this month, but he was faced with KDP peshmerga militia threatening him to leave or otherwise get shot.

“I told the KDP forces that we were both Kurdish, no need to aim guns in my face and they should respect journalists. But they forced us to leave with loaded guns in hands and aimed ready to shoot at us,” Amin said.

Thousands of Kurds protest since and have camped on the border against the KDP because the trench is very symbolic, bolstering borders world superpowers and occupation forces once drew and divided the Kurdish homeland, Kurdistan, into four regions over Iran, Iraq, Syria and Turkey.

“Kurds are ferocious because the trench is like a sharp knife cutting-in-half an old scar they have fought so hard to heal for almost a century now, that is why they call it, ‘Trench of Treason’,” Amin added.

“Kurds are ferocious because the trench is like a sharp knife

They once again opened fire on 14 April, this time shooting dead a 32-year-old Syrian Kurd, who tried to flee war-torn Syria to Iraqi Kurdistan and had nothing to do with politics and protests.

In the meantime, thousands condemn the KDP on the border crossing with the slogan: “Kurdistan is One, Stop Betraying Your Homeland.”

Turkish-Kurdish Prisoners Representative Deniz Kaya, said: “We are on hunger strike to condemn the KDP and Turkish Justice and Development Party (AKP), as they jointly entrench their borders to blockade Syrian Kurds. We call on KDP leaders to stop being an enemy to their own brothers and sisters.”

In solidarity with the hunger strike in Turkish prisons, 190 political prisoners in Syrian regime’s prison of al-Hasakah province also went on hunger strike and they reportedly included Kurds, Arabs and Assyrians.

Protesters as well as Kurdish journalists claim that Turkey and KDP jointly entrench their borders to impose a total blockade on Kurdish self-rule in Syria, a view held by almost all the main Kurdish parties of the Kurdistan regions.

“Turkey dig trenches on its borders with Kobane and Efrin cantons, while KDP digs on its border with the Cizire canton,” said Sozda Jalal, a female journalist documenting the trench digging northeast Syria.

“I firmly believe that Turkish soldiers and KDP militiamen have one military engineering committee, as the very same equipment, bulldozers and measurements have been used to dig exactly the same form of trenches on their borders with Syrian Kurdistan,” she noted.

“The KDP ‘Trench of Treason’ is comparable also to last year’s Turkey’s ‘Wall of Shame’ that public protests and hunger strikes stopped being built.”

KDP and its officials in the Kurdistan Regional Government of Iraq (KRG) claim that the trench is needed for “protection, preventing smuggling and terrorism”, although neighbouring Kurds in Syria’s Cizire autonomous canton control their own border, not anti-Kurdish armed militants.

“In other words, the KDP is labeling us, ‘Terrorists’, this is a historical embarrassment for the KDP,” said the Assyrian female co-leader of autonomous Cizire canton Elisabeth Korean.

KDP attempts to legitimize the move in the name of the KRG, but the Kurdish public in Iraq strongly condemn the trench and have demonstrated through every city with banners reading: “Not In Our Name.”

Patriotic Union of Kurdistan (PUK), which has shared power with KDP for almost two decades in Iraqi Kurdistan, astonishingly took part in the demonstrations and condemned the KDP.

Sidiq Koceri, one of the Syrian Kurdish representatives of the Koceri tribe known to live on the border and make a living on agriculture and animal farming, said: “We are Kurdish not terrorists. We have our villages on this border and have lived here for countless years. I assure you that the anti-Kurdish Ba’ath states in Syria and Iraq never dug a trench on this border like the KDP now does against us.”

Koceri compared the KDP to occupation forces. “The KDP deepening the borders and its militiamen shooting, wounding and killing Syrian Kurds made it clear to the world that language is the only difference between KDP gunmen and occupation armies in Kurdistan.”

“Imposing an embargo, blockade and entrenching the border when we are faced with ISIS attacks on daily basis assists the deadly attacks against the Kurds here in Syria, the trench therefore does imply, clearly, some sorts of national treason,” he said, adding, “ISIS has been defeated in Kobane right now and so will the trench diggers.”

It is unlikely for the trench to ignite a Kurdish civil war, unless otherwise KDP militiamen attack, given that the Kurdish self-rule cantons and the YPG believe only in self-defense.

Many Syrian Kurds on the border now use shovels and their bare hands to refill the trench, but efforts in vain, so it seems, as the trench is expected to complete in the coming days, dividing the Kurds like no occupation forces have been capable of doing ever, albeit a century-long conflict.