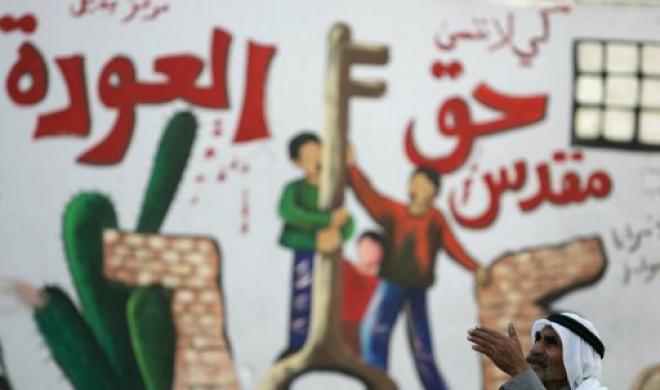 This month, Palestinians mark 66 years of statelessness. For many, the “Nakba,” which loosely translates as the “Catastrophe,” refers to the 1948 expulsion of hundreds of thousands from their land and the subsequent erasure of Palestinian names, neighborhoods, and villages. Blogger Arablit takes a look at the some of the best works born from the Catastrophe.

But, for a number of prominent authors, the Nakba is not an event that began and ended in 1948. Instead, it’s an ongoing story about the lives of Palestinians.

Palestinian writer Adania Shibli has called the Nakba “a constant, ongoing” operation, where Israel is ever in the process of destroying and rebuilding occupied land, “changing the landscape to the point of making one wonder if one has a memory of what was there before.” Lebanese novelist Elias Khoury, in his open letter to the Bab al-Shams protest settlement early last year, referred to “the Nakba that has gone on for sixty-four years.”

While fiction and poetry should never be read as history — or as a substitute for such — the Catastrophe has been the scene for some of Arabic’s most brilliant creative works.

The short-lived Bab el-Shams settlement was named for Khoury’s Gate of the Sun, masterfully translated by Humphrey Davies and published in English in 2006. Khoury’s novel tells the shifting, multilayered story of Palestine from 1948 through the 1990s. He spent years conducting interviews and gathering stories for the book, which includes Palestinians’ initial flight in 1948. Among other tragedies, a crying child is suffocated by his own mother so that a fleeing group’s position won’t be revealed.

This echoes the tragedy at the core of Ghassan Kanafani’s Return to Haifa, one of the seminal Nakba narratives. The novella, translated by Barbara Harlow and Karen E. Riley, tells the story of Said and Safeyya, who flee their Haifa home in 1948. In the violent chaos of their escape, the pair leaves behind their five-month-old son. After their flight, their home is occupied by a widow named Miriam, who raises the infant boy as her own.

Kanafani’s influential story has inspired both Israeli and Palestinian theatrical adaptations as well as fictional responses, including Susan Abulhawa’s Mornings in Jenin.

Emile Habibi’s classic The Secret Life of Saeed the Pessoptimist, translated by Trevor Le Gassick and Salma Khadra Jayyusi, tells the Nakba story from another vantage: inside Israel. Here, the Palestinian anti-hero Said becomes a citizen of Israel and tragicomically collaborates with the Israelis, even cheerleading his own imprisonment.

But it is not only post-1948 narratives that comment on the Nakba. Novels set just before 1948 reproduce a moment of exceptional tension. Elias Khoury narrates the years just before Israel’s statehood in his beautiful, circular novel As Though She Were Sleeping, which begins and ends in Nazareth in the last month of 1947. This novel, also translated by H. Davies, depicts the moments before the Nakba begins, and the major cultural shifts in 1930s and 1940s Lebanon, Syria, and Palestine.

Sahar Khalifeh’s Of Noble Origins, translated by Aida Bamia, is another novel that, despite its unfortunate opening chapter, incisively explores individual lives — particularly women’s lives — in the years just before 1948. The book is an unusual and compelling tapestry of stories, treating the lives of Palestinian Christians, Palestinian Muslims, Jewish immigrants, and British colonial leadership with an equal narrative interest. A few books are set yet earlier, during the Ottoman era of Palestinian history, including Ibrahim Nasrallah’s Time of White Horses, trans. Nancy Roberts, and Raja Shehadeh’s nonfiction A Rift in Time: Travels with My Ottoman Uncle.

Palestinians and Lebanese aren’t the only authors to treat the Catastrophe. Egyptian novelist Radwa Ashour has returned to Palestine in a number of her novels. In Ashour’s The Woman from Tantoura, translated by Kay Heikkinen, she tells the epic story of Ruqayya, who is “al-Tantoureya.” Ruqayya’s story begins in the early 1940s and continues through the Nakba, the Lebanese Civil War, and multiple exiles. The novel — told through Ruqayya’s eyes — is narrated with a surprisingly light (sometimes too-light) touch, balancing horrors with small happinesses, such as a stolen kiss in an elevator. The relationships between Ruqayya and her three sons thicken the read.

But perhaps the most moving Nakba fragment is narrated in Mahmoud Darwish’s Journal of an Ordinary Grief, in poetic translation by Ibrahim Muhawi. It wasn’t until 1949 that the young narrator realized that there had been a Nakba. Why hadn’t he realized it in 1948?

Ah! We were tourists then. My grandfather carried a big bag full of money, and it was like a picnic in Lebanon. He took us to the apple orchards so we could pick choice fruit from the trees. And every week he took us to Beirut, which was the first city I ever saw after Acre. It wasn’t a flight; it was like a picnic. We were waiting for the Arab armies to defeat the conquerors in a few weeks, and we would then go back to al-Birwa.