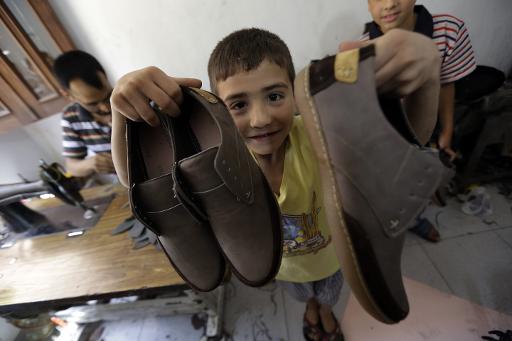 A massive influx of displaced families, mainly from Aleppo, to Syria's coast has boosted Latakia, a city whose economy heavily relied on its port and summertime tourism before the war.

A massive influx of displaced families, mainly from Aleppo, to Syria’s coast has boosted Latakia, a city whose economy heavily relied on its port and summertime tourism before the war.

“We like to get up late, sip our coffee and smoke our nargileh (water-pipes) before we go to work. But people from Aleppo can’t live if they aren’t working from morning till night,” he said.

Latakia’s population has doubled with the arrival of a million people fleeing violence in the northern city of Aleppo, Homs in central Syria and Idlib in the northwest.

The loyalist province has remained mostly untouched by Syria’s three-year war, and unlike the rest of the country, its economy is booming.

“There is a real economic boom. (The displaced) have got things moving, and the jobless have found work,” said Sami Sufi, who heads the province’s chamber of commerce and industry.

“People from Aleppo have a knack for business, and they’ve headed out to the nearby countryside to set up detergent, cosmetics and even food packaging factories,” Sufi added.

Food, cheese and cable-making workshops have also sprung up on the outskirts of Latakia, where rent is cheaper.

An Aleppo-born merchant who realised there was only one man in Latakia selling kaak, or traditional Levantine sesame bread, set up his own business. He now produces kaak in large quantities and distributes the delicacy throughout the province.

Even Aleppo’s famed olive oil-based soap-makers have found their way to Latakia, and they are now exporting their produce to the United States from the Mediterranean port city.

Abandoned for years, the industrial zone is now buzzing with activity, as textile, metal and mechanical workshops have filled the space out entirely.

Hassan Shobak, who produces tanker trucks, was the first to set up shop there, after he shut down his 4,000 square metre (43,000 square foot) factory in Aleppo at the start of 2013.

“We gave life to this empty place. Today, I have four workshops, and there isn’t a single metre (yard) available, even as the owners raise the rent,” said 46-year-old Shobak, who employs 40 workers and sells his goods both within Syria and elsewhere in the Arab world.

“If the municipality gives us more space, we could set up a huge factory like in Aleppo. I am sure many industry owners who closed down their businesses because of the crisis would come here,” Shobak said.

Aleppo was once Syria’s economic hub, until it became consumed by violence after a major rebel onslaught in July 2012 that has split the city into opposition and regime-held territories.

Several districts of the ancient city have been reduced to rubble by heavy bombing and fighting, forcing hundreds of thousands of people to flee.

People displaced from other parts of Syria have also sought refuge in Latakia.

Businessmen from Homs focus primarily on solar energy production, while those from Idlib concentrate on mechanics and electronics.

Latakia city’s commercial district has also become intensely vibrant thanks to the influx.

Omar Summak used to make hummus — the Levant’s favourite chickpea-based dip — in the east of Aleppo. But when his city became a war zone, he put his family in his pickup truck, and they made their way to Latakia.

Once he reached the coast, the 30-year-old started out by selling vegetables.

“But after passing through Anana street, I realised no one was selling accessories and trinkets,” said Summak, standing in front of his truck, which he had filled with brightly-coloured bracelets, plastic necklaces and earrings.

Prior to the war, Latakia’s economy would thrive during the summer, thanks to the inflow of tourists.

Some 600 villas near Blue Beach, in the north of Latakia, have been full for two years, despite soaring rental prices.

Sitting on the beach with his two wives and eight children, 35-year-old Mohammad Sankar says he left Aleppo nearly two years ago.

“We love to work and do business. Look at me, I left my city because of the security situation, and 10 days after I arrived I reopened my sweet factory here,” Sankar said.

The businessman has also teamed up with a Latakia native to set up a sausage factory.

“Business is good, but of course, should the army retake Aleppo, I will return. I love Syria but my heart is still in my city.”

The downside to the influx, said Daad Juni, a 45-year-old shop attendant, has been the massive increase in prices.

“Prices have doubled since they (the displaced) came — including apartment and shop rental costs, and food. But we don’t complain, business is very good.”