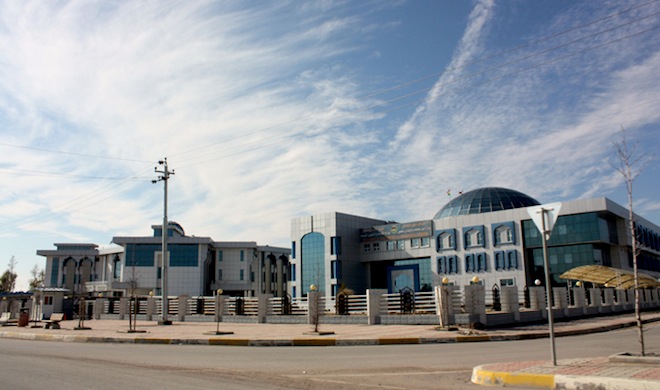 A teenage school student from Erbil has made headlines after it was revealed that he was imprisoned in solitary confinement, severely tortured, simply for openly saying that he is an atheist.

Ahmad Sherwan, 16, says he was first arrested last year when he was only 15.

“I was tortured with electric shocks, imprisoned in dark solitary confinement, threatened to be killed, attended trials and now waiting for my final trial, simply for having voiced my opinion that I no longer believe in God and proud of being an atheist,” he said in a phone interview with Your Middle East.

“My father and I had a debate on 13 October 2013, during which I revealed I no longer believe God and that religion is just a myth. This was the fruit of my extracurricular readings.  But father was furious; left home and reported me to the police. I was arrested at home at 11:00pm,” he said.

“Three policemen hit me with belts, kicked me with jackboots and tortured me with electric shocks at the Azadi police station in Erbil. I felt unconscious and whenever I tried to open my eyes, they insulted me, spat on me and beat me until I was unconscious again.

“Three policemen hit me with belts, kicked me with jackboots and tortured me”

“At 2:00am on 14 October 2013, I woke up to splashes of cold water on my face then was told a judge ordered my transfer to Erbil criminal prison, where I was tortured again in the same way. I remember all the preparations for electric shocks on a sensitive part of my body, but I cannot remember the rest because afterward I was just lifeless.”

Sherwan spent 13 days inside Erbil criminal prison before he was released on bail.

“My uncle came and deposited the assets needed for my bail. I attended a trial, but the judge insulted me. I talked about the right to free speech, he replied shouting that there is no place on earth for disgraceful infidels like me.”

He claims an investigative judge and a social worker also insulted and threatened to kill him while in prison.

“A social worker visited me, who clearly saw the blood on my face from the severe beatings, but said it was religiously permissible for anybody to kill me. I demanded to meet an investigative judge, who told me to get out of his office or else he would right away put his shoes in my mouth.”

Sherwan says he has provided police with recordings of death threats received in phone calls from followers of the Kurdistan Islamic Group (KIG).

Although he is under age and legally considered a child by all Iraqi and Kurdish laws, he is waiting for his final trial scheduled to take place on 1 June 2014, expected to prosecute him as an adult similar to previous trials.

He says in the past seven months he contacted many Kurdish media outlets in Erbil, but all refused to run his story.

The award-winning private Awene newspaper finally published the story last week. It went viral on social media and led to a public campaign condemning Erbil authorities, signed by hundreds of Kurdish writers, journalists, artists and activists calling for the trial to be revoked.

“The trial is just illegitimate,” says the official statement of the campaign. “Sherwan’s rights have been denied in the most brutal way.  The authorities are responsible for violating human rights, children’s rights and freedom of expression. We will take this case to international organisations defending human rights.”

Erbil police held responsible were contacted for this article but declined to comment. Nonetheless, Erbil Police Director Abdulkhaliq Rafat confirmed in a press release that Sherwan is a teenager arrested and imprisoned just as claimed.

“The teenager was arrested and imprisoned, but was never tortured,” he said.

In an interview with Hawlati daily on 25 May 2014, the head of the International Hartland Alliance programme against torture in Iraq, Martina Ferraris, said that children are among those tortured across Iraqi Kurdistan prisons.

“Torture exists and is widespread across Iraqi Kurdistan prisons,” she said. “Those tortured can be anyone, including children, the elderly, men and women,” she added.

The media outlets owned by or tied to the ruling Kurdistan Democratic Party-Iraq (KDP-Iraq) have responded with a smear campaign stigmatising the teenager as a “drug addict whisky drinker”.

Independent lawyers have voiced their support for Sherwan saying alcohol drinking and drug use are unrelated to the case; the media outlets should therefore stop a smear campaign “illegally stigmatising” a young teenager.

“The trial is just illegitimate”

Alcohol drinking is widespread in Iraqi Kurdistan and modern bars have become a more common sight on the streets of Erbil. That trend is set to continue as five star hotels flock here and the city was recently named Arab Capital of Tourism in 2014.

“I have my medical report confirming I was subjected to severe torture, as a result of which I suffer from traumatic stress and an unstable psychological problem,” Sherwan said.

“They accuse me of alcohol drinking, OK, but how about a public trial? I have court documents stating I was arrested and trials held for disbelieving God, that was my crime. I can be sentenced for life; but nothing will change my mind about God and religion being myths and utter backwardness. My arrest, torture, trials and smear campaigns all proved me right, ” he added.

The smear campaign in the media has led his family to eventually support him, publically announcing that they regret to have reported Sherwan to the Erbil police in the first place.

“Sherwan is a polite, smart and an intelligent young man. He was reported to the police for a healthy modification in his ideas, not for the local authorities to torture, hold trials and publically accuse him of drug use. We reject such nonsense accusations against a child and defend his rights as a beloved family member,” his uncle said on behalf of Sherwan’s family.