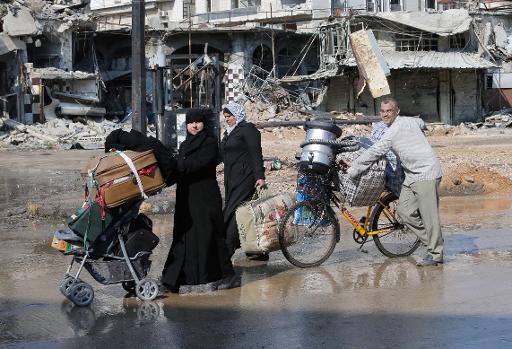 Three years of civil war in Syria have had a disastrous effect on the economy, plunging half the population into poverty, a Syrian research centre said in a report released Thursday.

“Squandering Humanity” was produced by the Damascus-based Syrian Centre for Policy Research in conjunction with the UN Development Programme and the UN Palestinian refugee agency.

It says the conflict is creating “economies of violence that flout human rights, civil liberties, poverty rights and the rule of law.”

In the end, “Syria has become a country of poor people afflicted by a ruinous decent into poverty,” the report says.

Three-quarters of the population is living in poverty and 54.3 percent in extreme poverty, it said.

Even worse, some 20 percent of people were living in “abject poverty,” with those in “conflict zones and besieged areas facing hunger, malnutrition and starvation.”

Poverty is a reflection of unemployment, which has surged from 10.3 percent in 2011 to 54.3 percent at the end of 2013. A total of 2.7 million people lost their jobs, affecting 11 million who depended on them.

Geographically, joblessness was said to be highest in the northeast, in Hasakeh and Raqa provinces, reaching 65 percent in the latter.

Fourth quarter private consumption plunged 25.5 percent from a year earlier, with spending focused almost exclusively on food and, for the almost 45 percent of people who have fled their homes, on rent.

And that has been made all the more difficult by an astronomical 178 percent rise in prices since 2011.

At the same time, the structure has altered sharply, with most of GDP now represented by domestic trade and government services, while agriculture and industry have slumped.

The educational system was said to be on the verge of ruin, with 4,000 schools destroyed, damaged or being used to house the internally displaced.

The report said that, nationwide, just over half (51.8 percent) of school age children were not going to school. But that figure reached 90 percent in Raqa and Aleppo provinces, and 68 percent in the Damascus provincial countryside.

As for the healthcare infrastructure, the report said 61 out 91 public hospitals had been damaged, and 45 percent of them were out of service altogether.

The sector has been further hit by health care personnel fleeing or being killed and by the collapse of the nation’s pharmaceutical industry.