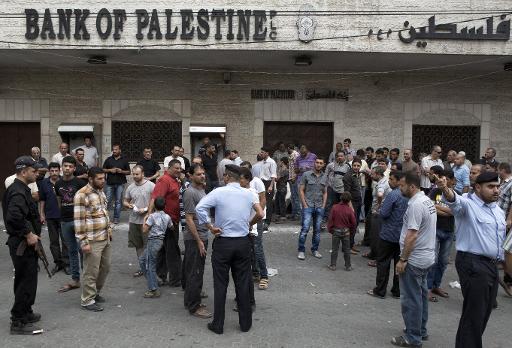 Hamas demanded Thursday that the Palestinian Authority take employees of the disbanded Gaza government onto its payroll, after scuffles broke out at banks in the Palestinian territory.

The dispute was the first hitch for a unity government sworn in on Monday under a reconciliation deal between Hamas and the West Bank-based Palestinian leadership to end seven years of rival administrations in the two territories.

“What happened at the banks was a result of anger by employees at being discriminated against and deprived of their wages,” Hamas spokesman Sami Abu Zuhri said.

“The new government must take responsibility for everyone, and not take steps that will bring back the division of before,” he added.

The PA had paid its Gaza-based employees as usual on Wednesday.

But Hamas government employees, who were expecting the PA to starting paying them immediately after the reconciliation deal, did not receive their wages, sparking protests as their PA counterparts withdrew money.

Hamas’s 50,000 civil servants are not registered as PA employees because they were appointed after the Islamist movement ousted loyalists of president Mahmud Abbas from Gaza in 2007.

But Hamas has been unable to pay most of its workers for several months, after severe pressure from neighbouring Egypt strangled its cash flow.

The PA said it would “study” the possibility of taking the Hamas workforce onto its payroll.

“The budget for this month’s salaries was prepared before the reconciliation agreement,” government spokesman Ihab Bseiso told journalists in the West Bank city of Ramallah.

“There are many technical procedures the finance minister will see to, and the finance and law committees will meet to study the issue.”

Former Hamas premier Ismail Haniya, who resigned after the unity government was formed, phoned Qatar’s emir on Thursday to ask for his help in supporting the new government.

According to a Hamas statement, the emir, Tamim bin Hamad al-Thani, “promised to help,” particularly with paying the salaries of employees.