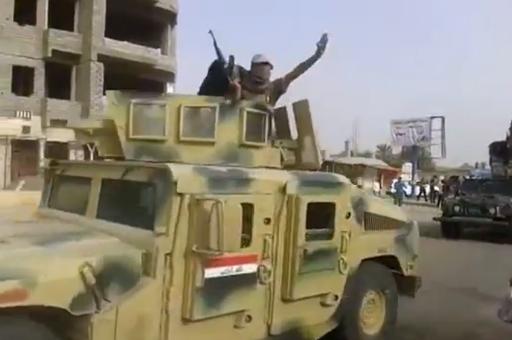 A lightning offensive by Sunni militants may have sounded the death knell of a centralised Iraq, say analysts, who suggest the country, at best, may survive as a federal state.

In just a week, an insurgency spearheaded by the jihadist Islamic State of Iraq and the Levant (ISIL) has laid bare the country’s sectarian and ethnic divisions.

The state of Iraq, in its modern form, was created in 1920, and has always been a patchwork of ethnicities and religious confessions.

Its population is mainly Shiite Muslim Arab, but the large Sunni Arab minority dominated the country since independence in 1932 until Saddam Hussein was overthrown in the US invasion of 2003.

There is also a sizeable minority of Kurds. Thrown in to the mix, are ethnic Turkmen, Christians of all stripes and other minorities.

The Kurds, who straddle the borders of Iraq, Iran, Turkey and Syria, have for a century fought to have a state of their own, and have taken advantage of the current crisis by seizing the oil-rich area of Kirkuk.

Meanwhile, leading Shiite clerics have reacted to the Sunni offensive by making a call to arms, raising fears of all-out civil war.

Fanar Haddad, a research fellow at the Middle East Institute of the National University of Singapore, said that, “at least from a Kurdish perspective, Mosul was definitely an irreversible turning point”.

That was a reference to Iraq’s second city that fell to ISIL control last week.

“Kirkuk was seen as one of Iraq’s most intractable problems and it was effectively resolved overnight thanks to ISIL and company,” Haddad told AFP.

The Kurds, who have had their own autonomous region within Iraq since 1991, have long laid claim to Kirkuk, as its energy resources would enable them to enjoy total economic sovereignty.

The Iraqi Kurds’ premier has said it will be “almost impossible” for Iraq to return to how it was before last week.

In an interview with the BBC, Nechirvan Barzani said he believed autonomy for the Sunni areas might be the best solution.

Haddad says partition of any kind remains a thorny subject in Arab Iraq, and that the “conflict between Sunni and Shiite political actors has been about control of the whole rather than separation.”

That said, ISIL has a broader objective — creating an Islamic state incorporating vast tracts of Iraq and neighbouring Syria.

Haddad says, after recent events, “never before has the prospect of partition of Arab Iraq been more of a possibility.”

John Drake, an expert on Iraq with British security group AKE, was asked if Iraq could remain united.

“I don’t think it’s impossible, but it is highly unlikely,” was his verdict.

“The de facto internal borders have changed, and I think they are likely to solidify into de jure borders over the coming years.”

The UN envoy to Baghdad, Nickolay Mladenov, described the crisis as “life-threatening” for Iraq and the region as a whole.

Arthur Quesnay, from the Institut Francais du Proche Orient, said he believes Iraq can remain whole, but only if it adopts federalism.

“Iraq can survive as one country, but with a federal or confederal system after negotiations and a consensus between Baghdad and other actors. The constitution allows this,” said Quesnay.

“Most Arab Sunni actors, including the insurgents, are nationalist. They want power to be shared in a more balanced way, and they also want political autonomy in their regions.”

All the experts agree that the current crisis is rooted in the 2003 invasion.

“The Americans dismantled Iraq’s institutions, but Maliki will go down in history… Iraq lost its geographic integrity on his watch,” said Ruba Husari, a top expert on the Iraqi oil sector.

“The political, economic and energy future depends on the ability of the different constituents of the Iraqi polity to pull the country together, before the ship sinks completely,” she said.

The Kurdish landgrab, she added, “is a recipe for eternal instability.”

In May 2003, Paul Bremer, US President George W. Bush’s viceroy in Iraq, led a campaign that dissolved the army, throwing out thousands of troops and officers.

Many of them then joined a Sunni insurgency against the new government, and have now become part of ISIL or are allied with it.

Researcher Quesnay said: “The Americans destroyed the state and kicked off the country’s sectarian decomposition. Now, all political actors must rely on their ethnic or sectarian background to enter the political scene.”

“Prime Minister Nuri al-Maliki failed to act as a national political leader, and has relied instead on sectarianism, marginalising the Sunni elites who have found themselves with their backs against the wall.”