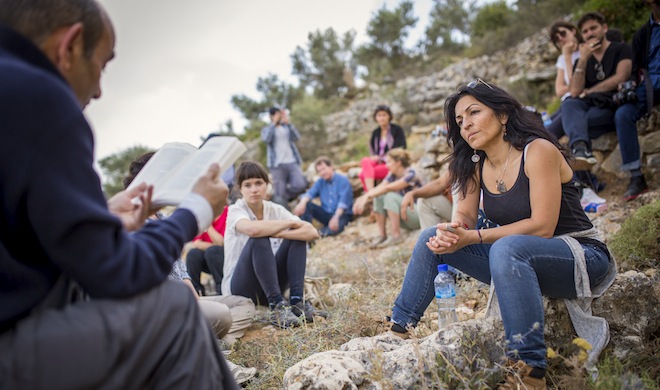 The Jerusalem International Writers Fest was held mid-May, just two weeks before the Palestine Festival of Literature was staged all across historic Palestine. At the Jerusalem festival, there was no apparent recognition of Arabic literature, despite the city’s large (~34%) Arab population. How can that be? asks blogger "Arablit".

At the opening ceremony of the Jerusalem International Writers Festival, author Dror Mishani decried this lack:

More and more, Hebrew literature is being created from itself, within itself, contrary to the way that it has been created over the centuries – with too little dialogue with foreign literatures – and even turning its back to languages and literatures around and inside it.

We almost don’t translate literature from Arabic. More than that, we even put up with a law that effectively prohibits the import of books from Arab countries.

I belong to a generation of writers and authors who cannot even conduct a dialogue with the languages and literatures that surround them, and in their very midst.

This touched Mishani in particular, as, “Until a generation or two ago, this was not the case.”

My grandfather, Rafael Mishani, was born in 1921 in Aleppo, not far from Syria’s border with Turkey. He was a clerk and not a writer, but he loved to tell his grandchildren stories of Aleppo of his childhood. If he had written them down, if he could write today a lament of ruined Aleppo, perhaps he would have written it in Arabic.

I do not know Arabic.

I don’t speak Arabic and I don’t understand it.

I decided to start learning Arabic, and, hopefully, within a few years, I’ll be able to translate Arabic literature to Hebrew, especially detective novels, which, just as here, have also recently begun to sprout in the Arabic world.

Elias Khoury, whose novel White Masks was recently translated into Hebrew, also spoke about this “98 percent“ with Haaretz:

Do you know how many Israeli Jews are fluent in Arabic? Two percent. It’s outrageous! And how many Palestinians in Israel speak Hebrew? Ninety-two percent. What does that say about someone coming to a place and not speaking the language? That you are a tourist, or a chance tenant? It’s not logical. It shows the colonial relationship even between the languages.

In an April piece in Haaretz, Dr. Yonatan Mendel noted that even those Israelis who do know Arabic might not have literary interests in mind: “The question is: Are we willing to have a real discussion about Arabic study and not only connected to security? Because the moment we see it as connected to security it changes the way it is taught.”

Elias Khoury told Haaretz he supports a boycott on Israeli institutions, remarking, “I think it is a good thing for the Israelis.” But this does not affect the transfer of literature: White Masks is the third of Khoury’s novels to be translated into Hebrew.

Translator Hannah Amit-Kochavi recently told Hadassah magazine that, until 2009, only 40 Arabic novels had been translated into Hebrew. “I was asked to write a book about translation from Arabic into Hebrew, but I refused because nobody would read it,” Amit-Kochavi said.

Amit-Kochavi noted an attempt by then-Minister of Education Yossi Sarid, in 2000, to include two poems by Darwish in the high school curriculum. The poems would not have been mandatory, but only included on a long list of poems from which teachers could choose. According to Hadassah, this triggered “a national hysteria.” Then Prime Minister Ehud Barak declared: “Israeli society is not ripe to study Darwish.”

“I would like every Israeli to be able to speak to an Arab about all sorts of ordinary matters,” Amit-Kochavi told Hadassah. “That is more important than literature. They should be able to read Mahmoud Darwish without panicking.”

A February op/ed in Haaretz also noted that Israel’s main literary prize has not recognized a novel written in Arabic. The op/ed authors suggest creating a new category for the Sapir Prize: “a special category for a work in Arabic, named for an Arab writer citizen of Israel (the late Emil Habibi would be a good choice).”

The truth is that there is no Palestinian. It’s a big question, why there are no Palestinians in Israeli literature, and if there are, they are very marginal, they are a shadow. Whereas in the literature of the victims, all you have to do is read Kanafani and how he writes about Miriam to understand that to be defeated makes you more human.