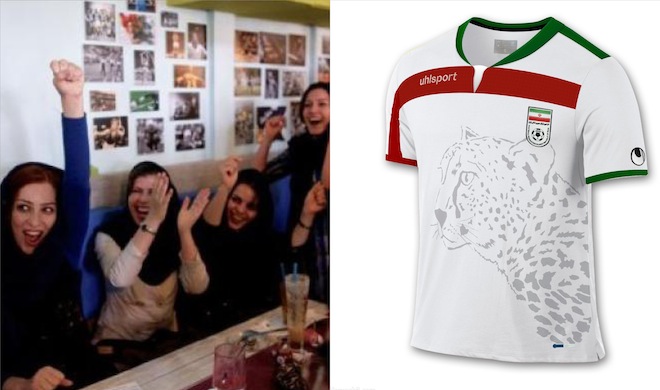 From good looks to environmental awareness, Your Middle East's Alborz Habibi has put together a bunch of reasons for you to fall in love with Team Melli.

Iran and Algeria were the only countries in the conflict-hit Middle East to qualify for the Brazil World Cup last year. An outstanding performance by Team Melli could prove there are other things this ancient region stands for rather than war and conflict.

No matter if they perform well or not, the players’ gesture and hairstyle will be a good enough reason to watch the games. During Iran’ World Cup opener against Nigeria this week, its handsome goalkeeper Haghighi made headlines for his style, attracting fans from across the globe as it became a trending topic on Twitter. You will also have to keep an eye on other players such as Reza Ghoochannejad, Daniel Davari and Alireza JahanBakhshi who have great potential and allure to keep fans transfixed throughout the matches.

Tehran and Rio are far apart. Still whenever Team Melli is in need of support, the Iranian fans are prepared for self-sacrifice, let alone the 13,000 km travel. Even the jet lag can’t prevent them from cheering on the team with passion and joy.

“There were lots of Iranians in Brazil’s Curitiba,” said Negar Mortazavi, a DC-based Iranian journalist who live blogs from the World Cup. “They have come out in their thousands and the city has literally fallen into their hands. We are just expecting more to come for the match against Argentina tomorrow.”

The game between Iran and Nigeria led to a 90 minute suspension of a critical round of nuclear talks in Vienna as Iranian Foreign Minister Zarif and his team preferred watching the match to negotiating the nuclear dispute with world powers. The game also pushed Iran’s president to replace his clerical clothing with a Team Melli jersey in a very rare and bold move.

Unlike other nations present at the World Cup, Iranians have been barred by police from watching the matches in public places, cafes and cinemas. Still the World Cup spirit can be felt on the street and in front of the newsstands. Even a goalless draw can paralyze police operations, bringing jubilant crowds to the streets over midnight.

Apart from the other three giant teams that Iran has to face in group F, it has routinely been facing and struggling with a bigger opponent since last year: Economic sanctions. They are all about Western concerns over Iran’s disputed nuclear program, the West says, although in practice they have come at a high cost for sectors which have no links with the program ­– including sports. Due to tough restrictions on financial transactions with Iran, none of the big international brands dared to sponsor the team in this World Cup, leaving them to pick Uhlsport, an infamous German sports goods manufacturer as the producer of their kit.

The fans still feel embarrassed when sports commentators sneer Iran for not affording to buy enough kits for its players. The jerseys certainly aren’t as stylish as the Adidas-made ones worn by Iran’s rivals since they reportedly shrunk in the wash. Nevertheless, officials deny such claims.

“The sanctions side effects weren’t limited to the jerseys only”

The sanctions side effects weren’t limited to the jerseys only, given that Team Melli failed to arrange friendly matches with any of the top rated teams and was forced to cancel several training camps and matches due to lack of funds.

The Iranian currency rial has lost over half its value against the dollar in the past couple of years, putting the future cooperation of its veteran Portuguese head coach Queiroz with Team Melli in danger as the cash-strapped government hasn’t yet provided the fund to extend his deal with the country’s football association.

Despite all this, the players seem determined to make history in Brazil this year, hopefully becoming the first Iranian team to reach the round of 16 in the tournament’s history. The team shared points with Nigeria in a goalless draw this week, making it the first Iranian team to avoid defeat in a World Cup opener and keeping its hopes for qualification alive. Each player would be awarded up to $10,000 if the team earns three critical points in their upcoming match against Argentina, Iran’s deputy sports minister said in Brazil.

“In their match against Nigeria, most Iranian players earned 6 out of 10 score or above in my view,” former Iranian sports presenter and journalist, Mehdi Ahmadi, told Your Middle East. “On paper we have little chance to qualify and it depends on the game between Nigeria and Bosnia Herzegovina, which we can held to 0-0 draw in our match next week.”

You might have come across a very unfamiliar name recently when checking the top players of the first set of group-stage matches published by FIFA. That name obviously is Pooladi (translated as steely in Persian) whose steely defense undoubtedly saved the team from the jaws of defeat.

“A measure of Iran’s defensive effort against Nigeria is that it has posted more completed clearances than any other team aside from Mexico,” explained FIFA without mentioning other solid defenders of Iran such as Jalal Hosseini who have refused to let their opponents score any goals in the three consecutive pre-World Cup friendlies, except one.  “And Pooladi’s performance included six tackles, a header off the line from Shola Ameobi and, when the opportunity allowed, some steady work in the final third of the pitch where he completed five of six attempted passes,” FIFA added.

“Iranians are known for their emotional behavior and sense of patriotism“

Iranians are known for their emotional behavior and sense of patriotism. During the qualification campaign for the World Cup, Iran experienced ups and downs. Hopes faded after Iran’s surprising defeats to Lebanon and Uzbekistan. However, at the end they managed to beat strong opponents in their last three qualifiers to clinch first place in their group just above South Korea whose coach had vowed to make his Iranian counterpart watch the World Cup on TV. South Koreans were lucky that Uzbekistan couldn’t score an extra goal in their match against Qatar, qualifying for the tournament on goal difference. The feud between the coaches acted as a motivational force for Iranians.

The players come from a very wide range of ethnical and cultural backgrounds which makes the team seem lovely and democratically-selected for all people. Some of the players were born or raised outside the country; in Germany, the Netherlands, US and the UK, and the others are of Turkish, Persian, Arab, Kurdish and Armenian descent. Their hometowns differ from the most northern cities like Ardebil and Bandar Anzali on the Caspian coast to the most southern part of the country, like Bushehr on the Persian Gulf coast. The team’s goalkeeper Daniel Davari alone is of German, Polish and Iranian descent.

The team Melli Kit may not be the best in the World Cup, but it certainly has one thing going for it. The jersey features the endangered Asiatic cheetah and highlights an environmental message for the very first time at the World Cup. Apart from a beautiful Persian rug which Iran presents to its opponents in all the matches, its captain is set to offer his Argentinian counterpart Lionel Messi a so-called bio-ball prior to the match. The special ball features endangered species of the 32 countries competing in Brazil.