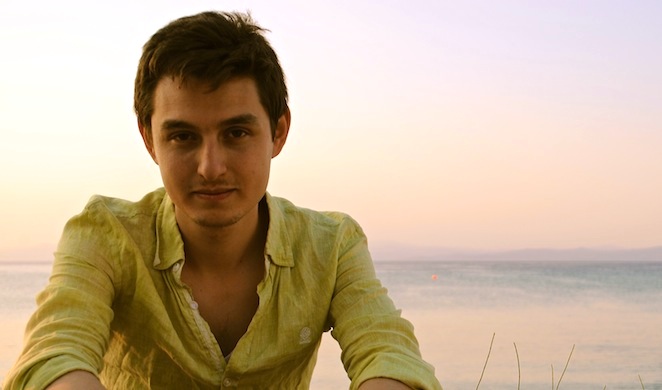 Tunisian blogger Aya Chebbi has caught up with Salim Salamah, a Syrian refugee who found safety in the nordic welfare state of Sweden. As spokesman of the Human Rights Palestinian League, Salim speaks with Aya about life as a Syrian-Palestinian refugee, and why he is still searching for an identity.

More than 2.8 million Syrians have been forced to leave their country so far. The vast majority of them remaining in neighboring countries, such as Turkey, Lebanon and Jordan. They are often living in dire conditions because countries like Lebanon and Jordan are already under extreme economic and political strain. A few others sought refuge in Europe. However, Europe has only granted asylum to 89,000 people. Though Europe is failing refugees from Syria , Sweden is one of the few European countries to offer permanent residence to Syrians arriving at its borders.

Salim Salamah found refuge in Sweden after fleeing Syria to Lebanon. I met Salim few weeks ago in Malmö, the most densely populated area in Scandinavia, but he wasn’t a mere Syrian refugee. While he was introducing himself, he was not sure if he should say a “Syrian-Palestinian”, “Palestinian from Syria”, “refugee in Sweden”, becoming “Swedish” or maybe just a human being! As I was confidently introducing myself as a Tunisian African and explaining more about my Africanism, he smiled and replied: “I like that you clearly know who you are because I am still in search for my identity”.

This complex identity of him dates back to his family’s displacement in 1948 following the Nakba that expelled Palestinians from their homes. He was born 1989 and raised in Yarmouk refugee camp, a historical Palestinian neighborhood established in Damascus during the 50s. At the age of 24, Salim found himself a refugee “again” and as he says “the journey continues…”

Images and dates have been engraved in his memory because of their atrocities… “28th October 2013 I left Syria…Taking that decision wasn’t easy! Because there will be no soon return to Damascus”. Getting into severe depression during his last few weeks in Syria, he was afraid of getting lost by “not doing any good” for himself or his country.

“From March to September, the movement was pacifist then the security became so tight that we couldn’t move around anymore…people had to fire back and when that happened, I couldn’t have a place for myself there! Because I didn’t want to die or kill,” he says.

Life in Damascus had become a nightmare for him with the checkpoints…“Day after day, moving within and outside Yarmouk has become difficult as between two checkpoints, there is another one, so you will never know who will stop you and when you will be arrested! It was just like jumping into the fire”.

The regime operated an organized process to get rid of activists like Salim, by arresting, torturing or constantly threatening them. “It was a slow death of the civil resistance and peaceful social movement, I was at risk as everybody was!” Beside demonstrating, campaigning, and being part of political gatherings, Salim’s special crime was blogging and telling jokes about the Syrian army. In his poem “A day in Damascus”, he writes, “passing by the checkpoint, I spit on it to return some of my dignity”. He was accused by the Syrian authorities of undermining the “prestige of the state”.

Once he moved to Beirut for almost four months, Salim tried to recover from war trauma and reconnect again, partly by writing poetry. Despite dealing with his own healing process, Salim was managing a project with Al Ghawth organization in Syria.

“Unfortunately the project ended after a few months because we didn’t get the needed funding as international donors and NGOs were not interested in finding partners to respond to the urgent need of Syrian communities and kids under war but more interested to enslave organizations for their own agendas”.

Travelling outside Lebanon and Syria for the first time in his life, he finally arrived in Sweden in February 2012. “When I arrived, I was surprised with the snow and the dark short days”. It took some time for him to adopt to the new weather, language, space, currency, lifestyle and to understand  “the strange situation”.

Despite the terrible developments in Syria, there is an ongoing debate about the legitimacy of the choice of activists who fled the country to seek refuge in the United States and Scandinavia. Salim has clearly made this choice an “individual salvation”. “I claimed political asylum because I can’t basically go anywhere as Palestinian from Syria but I made it to Sweden because I was just lucky!”

It is indeed a special case for the Palestinians from Syria. When the UN adopted the Refugee Convention and established the UN High Commissioner for Refugees, it excluded those falling within the UNRWA mandate from coverage under UNHCR’s mandate. “Outside UNRWA-mandate area, which is Jordan, Lebanon, Syria, or the West Bank and Gaza Strip, we are without protection”.

A concrete example of Salim’s frustration is the recent case of the four Palestinian Syrian activists detained in Sri Lanka just a few weeks ago. “UNHCR Sri Lanka refused to give a statement on the issue,” he says. “Husam, Muhammad, Ali and Baha are now at Buddha military prison where they have been badly treated psychologically and physically”.

Recently, Palestinians fleeing Syria are denied help even in Lebanon. Sadly, the tragic cases of Palestinian-Syrian refugees continue, not only in the global north, but even in the Arab region and especially in countries that sparked the revolutions in the region, such as Tunisia and Egypt. “In Damascus, we were celebrating the day Ben Ali fled Tunisia, today when Syrian Palestinians arrive to Tunis, they remain stuck in Carthage airport with no support…”

As the spokesman of the Human Rights Palestinian League, Salim closely follows these cases and releases statements to support Syrian Palestinians without national or international protection. Having the advantage of understanding the  situation from personal experience, Salim found himself working with refugees though he aims to work more with youth and children in the future. Beside joining the executive board of the Human Rights Palestinian League earlier this year, he helps a Swedish organization in group development of coming refugees, especially in terms of communication with Arabic and French speaking refugees from Syria and African countries.

“I’m still sad, frustrated… because of this ongoing war that is rewarding to international community powers and Syrian regime rather than the Syrian people but working with people here is also rewarding …”

Partially recovered from the war trauma, Salim regained his life, strength and energy and that’s what keeps him moving forward in empowering himself and others.

I contacted Salim on Friday to ask him what that day, the World Refugees Day, would mean to him as a refugee. He immediately answered “you know… once you are a refugee, you are a refugee forever, at least for myself”. He then took some silent moments and recalled quotes of his friend Homi Bhabha: “The globe shrinks for those who own it… but for the displaced or dispossessed, the migrant or refugee, no distance is more awesome than the few feet across borders or frontiers”. “Today I achieved my few feet,” he continued, “and if I can make one more human being achieve those few feet, I will help!”

Having his family in Sweden since six months back, Salim now feels safer, something he hasn’t experienced for a while. It is still hard for him to be disconnected “twice” from where he belongs, and then to be asked to belong somewhere else… “I don’t identify myself as a citizen of any place,” he concludes.