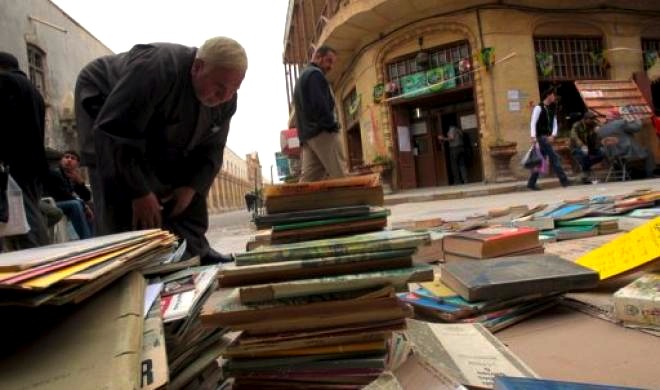 The way that the Iraqi media have covered the current crisis has left a lot to be desired. Instead of information they have spread rumours and encouraged sectarian divisions. If the country ends up with another civil war, the local media must bear some of the blame, writes Daoud al-Ali in Baghdad.

After June 9, when Sunni Muslim extremists were able to take over the northern city of Mosul, it was not just the Iraqi people whose opinions were vastly divided about what had just happened. The Iraqi media has also been split. And it feels like it’s whole mission – to inform – has changed too.

While some media organisations were strident in their support of the fight against Sunni Muslim extremists, others described them as revolutionaries who were taking part in a popular uprising. It quickly became clear that the Iraqi media was giving in to sectarian sentiments, just as the Iraqi people on the street were.

In fact, the Iraqi media have let their public down badly. As formal security forces appeared to be collapsing in various parts of the country, people really needed to know what was going on. But the Iraqi media didn’t seem to be able to provide that information.

“The Iraqi media have let their public down badly”

Instead, media organisations compensated for the lack of information by broadcasting and publishing material that was supposed to raise morale – this included revolutionary songs and replays of older victories achieved by the Iraqi army.

Over the past two to three weeks it has become quite normal for Iraqis to spend two hours watching news programmes which basically feature a lot of battle songs, while the presenter answers calls from Iraqis who were volunteering to fight the Sunni Muslim extremist group, the Islamic State of Iraq and Syria, or ISIS.

The fatwa – or religious edict – issued by Iraq’s Grand Ayatollah Ali al-Sistani, who is one of the world’s leading religious authorities and who is to Shiite Muslims what the Pope is to Catholics, became the basis for many a media report. Al-Sistani called for all Iraqis to defend the country against extremists, no matter which sect they were from. However many media organisations used his statement in programmes with a great deal of sectarian content. Often this involved hundreds of young volunteers marching around, chanting and making threats against the enemy.

And that was it. There was no further news about where the volunteers went, how they fared in their training and what happened to them once they were sent to the front line. If they even ended up there. Nobody knows.

In fact, Iraq’s media became so intensely involved in this aspect, that an actual militia was formed by Iraqi journalists from central and southern Iraq. Some of them volunteered to fight ISIS, others presented the news in military uniforms.

In many ways, this side of the media was more successful when it came to their core mission: Actual news gathering. They managed to show pictures from the battleground. These included shots of Iraqi army vehicles under the control of groups of young men who didn’t wear uniforms. These young men were then described as “sons of the Iraqi revolution”. These shows also focused on influential Sunni Muslim Iraqis who had “joined this revolution”.

Over the past week or so, many local journalists have started saying that they were pressured to cover the news in a biased way.

Some journalists resigned. “Offices of Al Arabiya, Al Arabiya Al Hadath and ANB channels in Iraq witnessed mass resignations yesterday, as many employees protested what they called ‘these channels’ policy toward the Iraqi people and their support for the ISIS’,” Beirut based news website, Al Akhbar, reported.

Al Arabiya itself said that the Iraqi government threatened “to close the Baghdad office of Al Arabiya News Channel and ban correspondents of both Al Arabiya and sister news channel, Al Hadath, from reporting in the country” because of an alleged bias. And apparently similar threats were made to BBC Arabic and Al Sharqiya for spreading rumours and false information.

Between these two very oppositional points of view, there was a huge gap – what was missing was real information.

What made getting information even more difficult was the fact that the Iraqi authorities then decided to block social networking sites in the country. Additionally services on various mobile phone applications that allowed people to share messages, like Viber and WhatsApp, were also disrupted.

In a statement issued by the Ministry of Communication, spokesperson Amir Khader al-Bayati said that a huge percentage of the current battle for Iraq depended on how it was covered in the media.

It’s been well acknowledged that ISIS use social networking sites to intimidate their opposition and to recruit new members. A few weeks before their attack on Mosul, ISIS had published the fourth part of a documentary called Salil Sawarem, or the Clanking of the Swords, showing how they acted against their enemies around the country.

“The Al Furqan foundation, along with hundreds of its affiliated websites and forums, promoted part three and part four of the film in early June,” says Hisham al-Hashimi, an Iraqi expert on Islamic groups. “ISIS’ electronic army posted it on every kind of social media. It is a terrifying film and its producers are clearly proficient in the art of psychological warfare.”

Al-Hashimi says he feels sure that many Iraqi soldiers have watched this film, which is filled with horrific executions of people ISIS sees as traitors, such a soldiers, and demonstrations of the organisation’s power.

And this is why, the Ministry of Communication statement said, “it is very important to block social networking sites, in order to reduce their negative impact on national security”. The statement concluded that social media was often blocked in countries where there had been a crisis or a disaster.

Social media sites would still be freely available during working hours and the Internet would always be available, the Ministry said. In reality though, Internet and social media users in Baghdad reported that sites like Facebook, Twitter and YouTube were unavailable and that Internet services were very weak and often disrupted.

It seems that concerns about the negative impacts of the information being posted by ISIS outweighed any fears about freedom of the press or the public’s right to information.

“Blocking the Internet tarnishes the reputation of the modern state of Iraq,” says Ziyad al-Ujaili, who heads Iraq’s Press Freedom Observatory. “The Iraqi state should maintain the free flow of information across all methods of communication.”

In fact, al-Ujaili believes that doing things like blocking social media and cutting off the Internet just makes groups like ISIS seem more important and the information they broadcast seem more valid, no matter how untrustworthy it is.

“A lot of Arab, foreign and local media use social media sites to get and disseminate information about the situation in the country,” al-Ujaili says. “Blocking these sites means that media organizations lose contact with correspondents and audiences.”

A lot of Iraqi journalists use the information sent over social media by activists and local residents to try to verify what is happening on the ground. But this was nigh on impossible when the government’s opponents were circulating video clips celebrating the Iraqi army’s losses, and the army’s supporters were posting video clips about military actions and successes.

The situation at the Baiji oil refinery, north of Baghdad, was a prime example. There had been conflicting reports about which group controlled the much-fought-over site for days. And for days journalists were writing completely contradictory reports about what was happening there.

For instance, on June 24, ISIS militants broadcast a video showing locals in Baiji celebrating after their town was captured by ISIS gunmen. A few hours after that the government-run Al Iraqiya channel showed another film clip where its correspondent landed on refinery property in an army helicopter. It was extremely difficult to work out which version of events was correct.

A lot of problems that media organisations faced in trouble spots was not just their journalists’ issues with getting information out, due to a lack of online communication – many had to call in their stories – but they also had to deal with the absence of staff.

Some reporters and media staff left cities where ISIS took charge or they stayed home and opted not to work; ISIS is known for it’s dislike of the media. In Mosul, there had already been a series of assassinations targeting journalists.

So Iraqi media outlets were often forced to rely on information given them by local residents. However as one might expect, this news could not be neutral as people already had their own ideologies or allegiances.

Only a small number of Iraqi media organisations managed to send reporters to the front lines.

Stories from the frontline were rare and often, if they did air, they featured a journalist interviewing a member of the Iraqi military in some heavily fortified area, who talked about how successful a recent Iraqi army operation had just been or how successful one was just about to be.

Most of the frontline reporting was done by Western media organisations who sent reporters and film crews out with the Iraqi Kurdish military. Meanwhile independent Iraqi journalists who wanted to report at hot spots complained that the Iraqi army either did not allow them to come along on missions, or that they had said they could not protect them.

The views expressed are the author’s own and do not necessarily represent those of Your Middle East. The article is mirrored from Niqash.