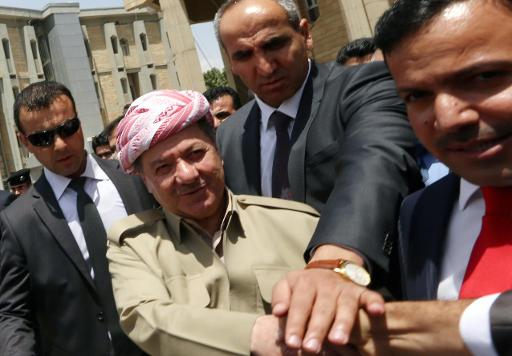 Iraqi Kurdish preparations for an independence referendum met with frustration in Washington, which stressed unity was essential to tackle a jihadist-led onslaught that risks “Syria-like chaos”.

In a rare piece of positive news during the crisis, however, a group of 46 Indian nurses caught up in the conflict were to be freed, one of them told AFP.

Iraqi Kurdish president Massud Barzani told the autonomous region’s parliament on Thursday that it should make “preparations to begin to organise a referendum on the right of self-determination”, but the US opposed the move.

The prospect of an independent state is made more attractive by what the Kurds say is Baghdad’s unwillingness to resolve the issue of disputed territory and late and insufficient budget payments to the region.

The White House gave the Kurdish leader’s plan for an independence referendum a cool reception, with White House spokesman Josh Earnest saying that “we continue to believe that Iraq is stronger if it is united”.

“That is why the United States continues to support an Iraq that is democratic, pluralistic and unified, and we are going to continue to urge all parties in Iraq to continue working together toward that objective.”

US Vice President Joe Biden later met Barzani’s chief of staff Fuad Hussein at the White House, and told the Kurdish delegation of the “importance of forming a new government in Iraq that will pull together all communities” to combat the Islamic State (IS), the group leading the insurgent drive, a White House statement said.

Maliki on Wednesday said “no one has the right to exploit the events that took place to impose a fait accompli” and that the Kurds’ steps towards self-determination were unconstitutional.

– Indian nurses to be freed –

On Friday, meanwhile, an Indian nurse told AFP that she and 45 colleagues who have been trapped in Iraq by the crisis were to be freed imminently.

The nurses, who were working at a hospital in executed dictator Saddam Hussein’s hometown of Tikrit when the militant offensive began last month, are currently being held in the militant-held city of Mosul.

An Indian diplomat, speaking on condition of anonymity, said the group was expected later on Friday in Arbil, which is a short drive from Mosul but has been insulated from the unrest.

Anticipating the nurses’ return, the chief minister of their home state of Kerala, Oommen Chandy, said: “We have achieved our aim to bring them back.”

The abductions, along with the capture of 39 other Indian workers in Mosul, left Indian authorities scrambling to secure their release and their fate is the first foreign crisis for the new right-wing government of Prime Minister Narendra Modi.

On the ground, Iraqi forces were struggling to break the stalemate.

Security forces entered Awja, Saddam’s birthplace, after fierce clashes but the government had yet to reclaim the nearby city of Tikrit despite a more than week-long offensive.

The cost of the conflict has been high for Iraq’s forces. Nearly 900 security personnel were among 2,400 people killed in June, the highest figure in years, according to the United Nations.

“If Iraq does not follow its constitutional political process, what is the alternative? It risks descending into a Syria-like chaos. And that is what people really need to understand, very very quickly,” he said.

Mladenov said a lot of damage had been done during the jihadist offensive that took second city Mosul before the IS declared a pan-Islamic state on a vast territory straddling Iraq and Syria.

“Iraq will never be the same as before Mosul,” he said.

“If you are asking me will the Iraqis, at some point, be able to go back on the offensive to recapture the part of Iraq that they’ve lost… probably not by themselves,” the chairman of the US joint chiefs of staff said.

But he added this did not necessarily mean the United States would have to take military action.