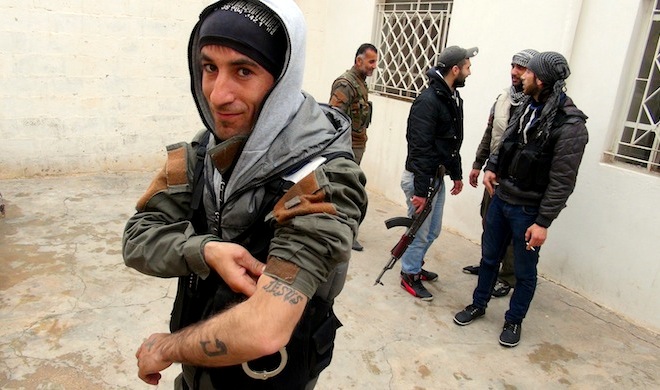 Syriac Christians are generally considered to fear Islamic rebels and therefore unconditionally back Assad's regime, but this is not the case in the predominantly Kurdish autonomous cantons commonly known as "Rojava", where they have their own armed forces, rule their districts and advocate coexistence as an "alternative" to the civil war.

It was founded in 2013 as a loose united front to defend the Christian neighbourhoods, but turned official earlier this year on January 22, when Syriac Christians joined the establishment of three predominantly Kurdish autonomous cantons of Cizire, Kobane and Efrin in northeast Syria.

Sutoro initially included Christian locals tied to the Syriac Union Party (SUP), but anybody can join now regardless of political affiliations.

The Christian autonomist fighters of Sutoro secure the inner city of the cantons while it is the Syriac Military Council (SMC), formerly a paramilitary wing of the SUP, that mainly fights in the frontlines alongside the Kurdish armed forces in the outskirts against regime soldiers and Islamic rebels.

Sutoro secures the supply lines to the frontlines and occasionally join the battles whenever simultaneous offensives by the army and jihadist groups seem on the rise.

The Sutoro central command is now based in the predominantly Kurdish city of Al-Qamishli, considered as part of the Cizre autonomous canton.

It is relatively safe compared to rest of war-torn Syria, but sudden skirmishes in Al-Qamishli city center and constant fighting in the outskirts are all too common these days.

This is because the entire Al-Hasakah province is divided between and controlled by rival armed forces.

The regime’s National Defense Force (NDF) controls parts of Al-Hasakah province as well as a couple of Arab neighbourhoods in Al-Qamishli.

Islamic rebels of the Al-Nusra Front and Islamic State of Iraq and Al-Sham (ISIS) control their respective areas in the Al-Hasakah province toward the plains and neighbouring Deir Ezzor province.

Kurds and Christians control the rest of the Al-Hasakah province, including large swathes of the plains as well as the their districts in central and northwest Al-Qamishli.

Prior to the civil war, a car journey from the city of Al-Hasakah to Al-Qamishli took around 1 hour; it now takes several hours, as one has to discretely avoid the always-on-alert checkpoints set up along the way by these territorial armed forces.

He took up arms two years ago and now leads a Sutoro unit defending the predominantly Christian Firdausi neighbourhood in central Al-Qamishli.

“I was an anti authoritarian person but believed in the Internet not rifles,” said Ibrahim. “I took up arms when I realised that my Syriac nation, Kurds and others in the northeast are in danger of being massacred by the major forces of the civil war.”

He said that the Christians in Syria do not fear the major forces in today’s Syria; it is just that they have experienced mass annihilations by Islamic rulers in the recent past, the most notorious of all being the 1890’s Sayfo massacre carried out by the Turkish-led Ottoman Empire said to have systematically killed hundreds of thousands of Syriac Christians in conjunction with the Assyrian, Armenian and Greek genocides.

“We fear that the same could happen in today’s Syria as Islamic extremists condemn us to death because we are neither Arab nor Muslim,” he explained. “The Kurdish-led self-rule autonomy managed to fight back and has prevented such massacres from taking place for the time being, but nobody is sure about the future.”

“Syriac Christians and Kurds advocate coexistence because this is the only solution. If applied elsewhere in Syria it can end the civil war,” Ibrahim continues. “It has been a very tough resistance for us Christians and Kurdish comrades alike amid this mayhem, but we have proved that the alternative to vehement nationalism and religious sectarianism is offered only by us, the most oppressed and neglected peoples of Syria.”

Although an official figure of the Syriac Christian population is not yet available in Syria, Christians are said to make up 10% of the country’s 22 million people.

Combatants of all ages above 17 are seen in the Sutoro armed units, but it is the Syriac Christian youths that make up most of the rank and file members.

The Christian religious symbols, various forms of the cross and Jesus’s name tattooed on the hands and arms of these young fighters signify their strong determination and willingness to fight for their ethnic and religious rights.

They proudly show religious tattoos that weren’t done for fashion or popular styles, but to prevent them from lying about their religion if one day captured alive by nemesis jihadists and held captive inside the enemy’s camp.

Gabi Dawd, 23, who has a Jesus tattoo on his left arm, said, “I first fought alongside Kurdish comrades in the ranks of the Peoples Protection Units  (YPG) before joining the Sutoro. If you put yourself in our place as Kurds and Christians then you would understand why we are fighting for our rights. The regime wants us to be puppets, deny our ethnicity and demand an Arab-only state. On the other hand, Islamic forces call for Jihad, war and Islamic Caliphate. We are neither of those and would rather die fighting for our freedom.”

He added: “I have the name of Jesus tattooed on my arm so I can never lie about my faith if I’m captured alive by the enemy and fear may overcome my bravery.”

It is vague to see and foretell what the future holds for these determined armed Christian autonomist fighters in Syria, but regardless of the consequences, history would not forget this resistance for peaceful coexistence in a country alienated and nearly lost to bloodstained sectarianism fueling a reactionary civil war.