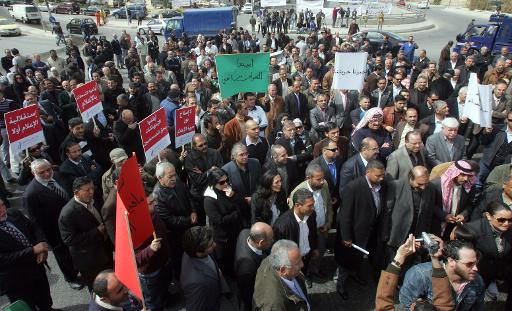 Jordan’s government has blocked nine unlicensed news websites, in line with a 2012 law criticised as a threat to freedom of expression, a global media watchdog said on Wednesday.

“The Jordanian government aims to use this licencing system to ensure that it controls the Internet and the information published on it,” said Virginie Dangles of Reporters Without Borders (RSF).

“It must urgently repeal the Press and Publication Law provisions that are incompatible with Jordan’s international obligations,” she said in a statement.

The disputed law gives the government powers to regulate “electronic publications,” requiring them to register with the country’s Media Commission and obtain a licence.

It says the chief editors of news websites must be members of the Jordan Press Association, giving the government the right to censor content and hold journalists liable for comments posted on webpages.

The blocked websites, include 7iber, Arabic for “ink”, an interactive website that published reports and features from contributors seeking to promote free speech and media freedom.

“We refuse to apply for a licence because we believe this is a form of censorship and that websites should not have to obtain permission from the government to operate,” said Lina Ejeilat, editor of 7iber.

“This licence is a way for the government to control the news reported by websites.”

7iber had changed its website address after being blocked a year ago, along with more than 250 other sites.

“We point out that the UN special rapporteur on freedom of expression specifically said in a report in May 2011 that there are no grounds for requiring online publications to be registered or licenced,” said RSF.

Jordan has been sharply criticised for the measures by global rights watchdogs, as well as from journalists, activists and the main opposition group, the Muslim Brotherhood, who see it as an attempt to impose censorship.