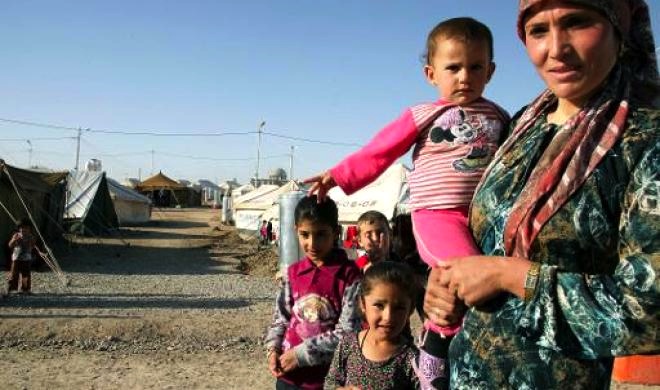 "These are strategic theories of rape in wartime which have been deliberately practiced by IS jihadists in Syria and now in Iraq," writes Dr Nazand Begikhani.

In the last few days, while the world has been overwhelmed by the flow of information about atrocities committed by Islamic State (IS) jihadists, public officials and local media channels have confirmed that hundreds of Yezidi and Christian women have been abducted, some of them buried alive and others subjected to rape and sexual slavery.

On 2 August, the IS attacked Sinjar and its surrounding areas, inhabited for more than 4000 years by peaceful Yezidi community, who practice a faith reminiscent of Zoroastrianism. Later in the week, the attacks were extended to other areas in the Nineveh plain, including Qaraqosh, Iraq’s Christian capital. The jihadists have murdered thousands of civilians, buried some alive in mass graves, burnt their homes, pillaged and destroyed their holy shrines, prompting a mass exodus.

We have seen long columns of women, men and children fleeing their homeland, trapped in barren Sinjar Mount without basic necessities and vital supplies and facing death. Many children have already died; on the second day of the invasion, UNICEF reported that the children died as a “direct consequence of violence, displacement and dehydration”.

“We have seen long columns of women, men and children fleeing their homeland”

Despite airdrops of humanitarian aid, the number dying continues to increase. Disturbing images of these crimes have been posted through social media. We have become witnesses to these atrocities, but an equally horrendous crime has gone largely unreported by the  international and mainstream media: the abduction of women, their rape and sexual slavery.

According to an Iraqi lawmaker of Yezidi origin Vian Dakhil, who addressed the Iraqi parliament last week, with tears in her eyes, “IS militants have abducted five hundred Yezidis women”. Later the Iraqi Human Rights Ministry indicated that families of the captives had contacted them to report the abduction of their womenfolk.

Erbil-based media network Rudaw was one of the few local media channels that quoted eyewitnesses who survived the attack saying “hundreds of women were kidnapped and transferred by IS jihadists to an unknown place in Mosul”.

The whereabouts of the kidnapped women became known when the head of the Women’s Rights Commission at the Kurdistan Region’s Parliament, Evar Ibrahim, confirmed on Tuesday 6 August that “the number of kidnapped Yezidi women had reached five hundreds, and they were transferred to a sports hall opposite to the Nineveh Palace Hotel in Western Mosul”. She added that the women were kept in “distressing conditions”. Later, when Qaraqosh was invaded by jihadists, local media channels reported that Christian women had also been taken captive.

What has happened to those women? According to media reports, some were buried alive. On 6 August, a spokesman for the Iraqi Red Cross, Muhammad al-Khuza’ee, stated that the Yezidi and Christian women “were taken as spoils of war and exposed at a market for sale”. The women were reportedly subjected to sexual assault, gang rape and sexual slavery. By all definitions, these are highly militarized forms of crimes.

It is not the first time that women have been subjected to such treatment by militia groups. In wartime circumstances, even when the army of the state is involved, women are not only taken as “spoils of war”, as the media put it, but their bodies have been used as a terrain of war. As so often happens in ethnic and sectarian conflicts they are raped and subjected to sexual slavery by their attackers as part of ethnic cleansing strategy. The ultimate aim of such acts is to weaken the integrity of the community.

In the case of the Yezidis, a coherent community that numbers an estimated 500,000, these forms of violence are used to subjugate the entire community, inculcate fear, undermine community and family structures, deliberately pollute the bloodline of the population, as well as to contribute to bonding of the perpetrators through the common act of rape. These are strategic theories of rape in wartime which have been deliberately practiced by IS jihadists in Syria and now in Iraq.

Although members of the IS organization come from different backgrounds with different cultures, experiences and histories, which might influence or even inhibit the behaviour of each individual, the group’s repertoire indicates that these patterns of sexual violence have been developed as part of the strategic aims of the IS. What is more, because in the Syrian and Iraqi societies, like most of the Middle East, women are generally perceived as carers and reproducers of their community, the jihadists seek to strengthen their control, split up and destabilise unified groups and stigmatize the women through abduction and rape.

This strategy sends a message to and instils fear among the other ethnic and religious minorities they seek to conquer. In the last few days, many parents, mainly men, who fled their homeland prior to the attack in Makhmur and Khzar, near Erbil, have been in a moral panic. They told me their main fear concerned the female members of the family. They didn’t want them to be captured by IS militants, “who will gang rape them”. One man repeatedly told me he did not mind being killed himself, but was frightened by the idea of his daughters and his wife being taken by IS jihadists. There have been reports of families throwing their children from the mountain to protect them from falling into the hands of the jihadists.

The despicable acts of the jihadists have many other consequences, not least the psychological and emotional damage which have to be overcome if the survivors are to heal and reintegrate into normal life. In the context of the Middle East in general and Iraqi as well as Kurdish communities in particular, the survivors face more dramatic consequences, because women’s bodies and sexuality embody family/collective honour. They risk murder at the hands of male members of their family and the community to preserve the group’s collective honour. If the women fall pregnant, their babies also risk death. Such violence, especially rape, can also be detrimental to perpetrating communities in the longer term; the anger desire for revenge it generates can last for generations.

All military conflicts involve principles of violence and are destructive, but capture of women, rape and sexual slavery are one of the most destructive aspects. Abduction and sexual violence in conflict are crimes against humanity and have been recognised by the UN Security Council as a threat to world peace and security. Recognition came when the UN adopted Resolution 1820 in June 2008. These crimes are not committed against individual women, but are used as a tactic of war and that requires international mobilization at state and organizational levels.

Such a mobilization should take numerous forms, including: immediate and effective intervention to stop the crimes; recognition by media channels and state agencies that women’s lives and their bodies are unacknowledged casualties of war; interventions to change the general culture and attitudes towards women and sexuality with public awareness programmes about consequences for individual and community health of sexual and gender-based violence. Finally, an end to impunity, with individuals as well as militia organizations and their leaders being held fully accountable for their crimes and punished accordingly.