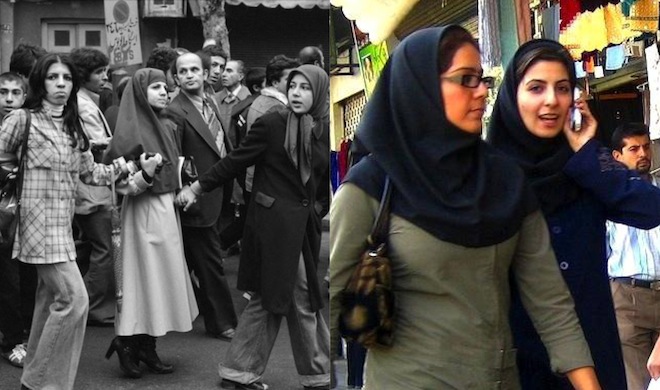 "The youth in Iran are in an awkward transitional phase," writes a teenage Iranian-American who recently returned from his stay in the Islamic Republic.

At 16 I wanted to live in Iran, life in suburban America bored me. I yearned for big city life in a new country. As a child I heard constant talk about the daily trials that come with life in Iran. I would hear my dad’s stories about growing up in Tehran’s south side.

When I proposed moving to Iran, I was met with unanimous disbelief. My friends, family, even my pediatrician doubted my ability to last in Tehran. I went anyway.

Adjusting to Tehran was difficult. The streets are crowded, and headaches induced by the infamous pollution was just one of many small annoyances that took getting used to.

“At 16 I wanted to live in Iran, life in suburban America bored me”

Anger is omnipresent in Tehran. People are angry at seemingly everything, other drivers, rising prices, the government. Taxi drivers openly curse the government while making their rounds, “We are barely getting by these days. Blessings of the Islamic Republic.”

Traffic is chaotic in Tehran. I had to wake up at 5:45am for school every day. Private drivers in sedans are used instead of school buses. The cars are small, uncomfortable, and unsafe by international standards. Our driver would crack jokes to our North Korean classmate on the way home, even with the language barrier we had a good time.

Disregard for laws is common in Iran, on the rare occasion that police enforce traffic laws, it is easy to get away with a bribe. I found this amusing, years of orderly living can become bland.

My school was as Iranian as any other. We conversed in Persian, and an all-male environment ensured that I could experience the same physical altercations and derogatives of my Father’s time. School started with a prayer read from the Qu’ran, and half-hearted morning exercises. Teachers were given respect unlike anything I was used to. We rose when they entered the class, and referred to them as “sir” when asking questions.

The youth in Iran are in an awkward transitional phase. They are trapped between traditional values and modern culture.

After school, bathrooms became changing rooms for students. Blue jeans were forbidden, but preferred over our uniform. Although I didn’t care about the color of my pants, my classmates wouldn’t be caught dead walking home in a school uniform. The latest fashion trends are closely followed, which is preferred over traditional dress. Women fare worse, they are required to wear a headscarf.

Sporting banned clothes or hairstyles could make one the target of the Iranian Morality Police (known as Gasht Irshad, or Enlightenment Police), who are notorious for jailing rebellious youth. Excessive makeup or revealing attire for women is specially punished. The police frequent busy intersections where their vans are quickly filled with fashion criminals.

Women are banned from entering sporting arenas. During the World Cup public viewing of games was not permitted. Despite the ban, the games were displayed in public anyway. The goal of the ban was to avoid mixed-sex crowds.

Despite this, boys around me would make plans with girls. More important than the experience, is posting evidence on Facebook, which has become an outlet for youths to express themselves in outrageous ways. Social media is blocked in Iran, despite the fact that main political figures run Facebook pages. “They bother us, but we bother them even more,” said a girl who lives in Qom, Iran’s most religiously conservative city. “As much as they push, we push back.”

Iranian weddings are an example of this transition phase – ancient Zoroastrian practices are carried out, then a legal contract is read by an Islamic cleric. Attendants dance to western music wearing revealing outfits, often while consuming banned alcohol.  These receptions are usually held in private gardens outside of city limits, where morality police are few and easily bribed.

“Social media is blocked in Iran, despite the fact that main political figures run Facebook pages”

The regime’s efforts to distort the public’s view of America have backfired. Iranians are captivated by America. I was asked about visas, green cards, and Katy Perry. Iranians consider America a “forbidden fruit”. In my International School banners that read “Down with USA, Down with Israel” were openly hung. In public schools “Death to America” chants are part of daily morning exercises.

Basij (literally; to mobilize) is Iran’s version of Boy Scouts of America, where knots and camping is replaced with conspiracy theories and military training for teens. Joining the Basij is beneficial for college entrance exams and future employment.  I met a Basij member who said he was taught that blue jeans are colored to match Satan’s eyes. He believed the Eiffel Tower’s triangular shape is a symbol of Freemasonry, who control the world according to him. He was taught to fight, and resist waterboarding in field trips known as, “Battlefield Outing.”

In the face of all this, the Basiji boy questioned the idea of negotiating with America and chanting ‘Death to America’ at the same time. He didn’t understand what America had done to deserve Iran’s hate. The young aren’t concerned with the Palestinian conflict or hating Israel, they want to be normal, not the world’s pariah, or the second most unhappy country in the world. The mindset of Iranian youth is not that of their parents, which is why change is inevitable.

They have to understand, their sons and daughters are beyond their command.

“Arash Armadi” is a pseodonym.