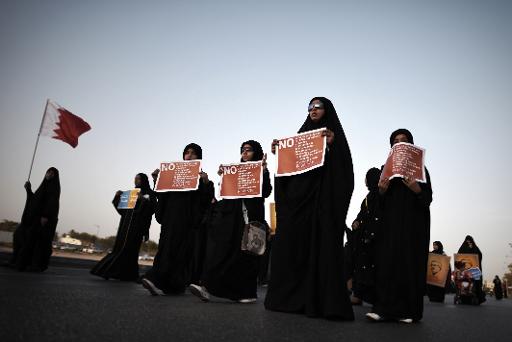 Thousands of Shiites protested in Bahrain Saturday against what they say are attempts by the Sunni authorities to tip the kingdom’s demographic balance in their favour by naturalising foreigners, witnesses said.

The Shiite opposition accuses Sunni-ruled Bahrain of having naturalised tens of thousands of Sunni foreigners in the Shiite-majority kingdom over recent years.

“The indigenous people of Bahrain are in danger,” banners read, as protesters waving Bahraini flags marched near the Shiite village of Daih, near the capital Manama, according to witnesses.

Police heavily patrolled the area but no clashes were reported.

In a statement read at the end of the protest, the opposition accused authorities of “following a destructive policy aimed at replacing the indigenous people with regime supporters”.

“Naturalising poses a threat to Bahrain’s security and stability,” they said.

The protest came two days after Human Rights Watch urged Bahrain to repeal a law allowing dissidents’ citizenships to be revoked if they have been convicted of terrorism.

The law was introduced last year.

On August 6, a court stripped nine Bahraini men of their citizenship.

HRW also said that 10 other Shiites, whose citizenships were revoked two years ago, are now facing jail terms or deportation from Bahrain.

Hundreds of Shiites have been arrested and many have faced trials over their role in anti-regime protests that erupted in February 2011.

Bahrain is a strategic archipelago just across the Gulf from Iran.

Washington is a long-standing ally of the ruling Al-Khalifa dynasty, and Bahrain is home to the US Navy’s Fifth Fleet.