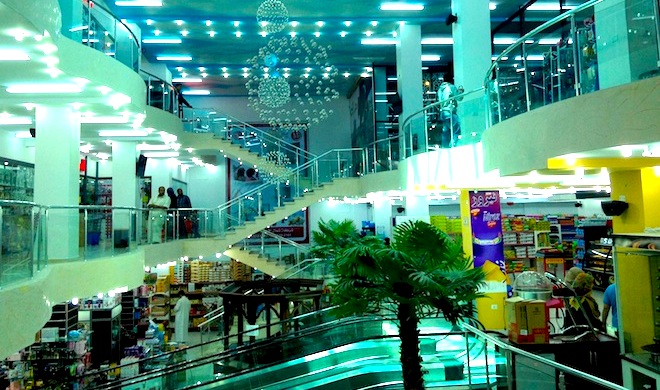 Freelance journalist Adela Suliman heads to Misrata, the Libyan port-city with a lot going for it: From big industry to trendy espresso hotspots for the young.

Driving into Misrata, along the famous “Trablus street,” visitors are instantly affronted by the damage sustained in the 2011 uprisings, which ousted Colonel Mu’ammar Ghadaffi. The city’s main artery is a ramshackle of mangled buildings with drooping balconies, pockmarked with ammunition holes, some still defiantly inhabited. The main road leads to the center of town where the “new” Libyan flag, adopted as the symbol of the revolution, dominates the skyline.

It is well acknowledged throughout Libya, that the town of Misrata suffered massively during the revolution. After months of siege, atrocious living conditions, NATO air strikes and brutal street-by-street fighting, the city was finally liberated on 15 May 2011. Three years on, the Misratan militia, not without controversy, remains intact and has been throwing its weight around. Most recently, this summer as a key protagonist in the fighting for Tripoli Airport.

THE MAIN TESTAMENT to the suffering endured in Misrata, is the Martyrs’ Museum. A large room, wallpapered with rows upon rows of ghostly faces. Men, women and children, all of whom lost their lives under the brutal Ghadaffi regime eerily stare down at visitors. On entering the building, visitors wipe their feet on a doormat depicting Gadhafi’s smiling face, before going on to view the Ruritanian uniforms and decorative weapons of the eccentric dictator.

In the background, a continuous loop of shaky home-video footage plays, filmed by revolutionaries on the front line of the 2011 uprisings. There is also a section dedicated to the torture tools allegedly utilised by the regime, including a deep armchair lined with upstanding rusty nails, which victims were forced to sit on during interrogations.

The rear garden of the museum is furnished with tanks, blown out ambulances and heavy artillery weapons utilised by the “thuwar” or revolutionaries. The revolution feels recent and palpable here, bringing to life the humanity of the struggle and the sense of community when fighting for freedom. Amongst the rubble, the people of Misrata are equally keen to bear both their literal and figurative revolutionary scars.

DESPITE THE CHILLING and indelible effect the 2011 revolution had, just a few steps away, it is easy to see the massive regeneration that is underway. Shiny new shop fronts and trendy cafes populate the high streets, offering a stark contrast to the wreckage. Misrata, Libya’s third largest city, seems to encapsulate both the devastation and hope of the revolution.

The latest addition to Misrata’s busy center is a new Western style shopping mall, which opened 6 months ago. Mohammed Al-Nai the Deputy Manager says, “the mall holds 35 shops and a large supermarket. We have approximately 2000 visitors a day and are extremely busy on the weekends.” It’s easy to see the allure. Clean and spacious, housing a variety of shops, the mall attracts the newly prosperous Misratans and their increasingly disposable income. The bookstore and coffee shop teem with young people sipping espressos and tapping away on laptops. “In Misrata we are one big family, we all know each other,” says Al-Nai, “historically, as a city on the seafront, our nature has always been outward facing.”

The Misrata seaport is indeed a key feature of the city and gives it strategic significance; being visited by approximately 200 vessels a year and acting as a vital lifeline throughout the revolution. Where once gold and spices were traded on this trans-Saharan trade route, containers now load steel and grain. Uniquely, it is the only port in Libya that is not managed by the Ministry of Transport, instead it is run privately by the Misrata Freezone.

“The Misrata seaport is indeed a key feature of the city”

Jamal El-Ghirani is the General Manager for Investments at the Freezone, which was established in 2009. It has the primary aim of diversifying the heavily energy-reliant Libyan economy. “The most popular and serious investments are international, mostly from Japan, Malta, Italy and China,” El-Ghirani explains. The key feature of the Freezone is that it permits companies to operate in an “offshore” tax environment. Companies are therefore exempted from personal, corporate, import and export taxes. This greatly incentivizes international companies seeking to circumvent the bureaucratic requirements of establishing “onshore” under the Ministry of Economy.

As El-Ghirani elaborates, “the Freezone port is also the only port in Libya that has Ship-To-Shore (STS) gantry cranes used for loading/unloading and Rubber-Tyred Gantry (RTG) cranes used for container ground movement and stacking.” This gives Misrata’s port a competitive edge over others in Libya and significantly reduces vessel waiting times. The Freezone has been visited by numerous international delegations and continues to grow rapidly, breaking records for container unloading in 2013.

“We have just completed the construction of 806m of ship berthing quays and have finalised plans to build 5 hectares of new container storage space,” says El-Ghirani. The minimum capital requirement for establishing in the Freezone is USD$100,000 and a diverse range of corporate activities are permitted – from transit trade to manufacturing and financial services – making the Freezone the jewel in Misrata’s economic crown.

ANOTHER BASTION OF the Misratan economic scene is LISCO, a state owned Iron and Steel company established in 1989. Dr Mohamad Alfighi is the Chairman of LISCO and a Misratan local, he explains that, “commerce and trade are the foundations of this city and we are at the forefront of economic progress in Libya.” The LISCO steel mill equally benefits from the seaport and prides itself on being “inclusive, employing citizens from over 66 different towns in Libya.”

Ahmed Juha is the Deputy Chairman of Misrata’s local council, an elected body with 28 seats responsible for managing the city’s civic affairs. “Since the time of the Phoenicians, Misrata has been synonymous with commerce”, Juha claims, “We are notoriously business minded people. Not only national, but international investors are flocking to Misrata because our security situation is excellent and our administration is efficient.” Going forward Juha explains that there are a number of projects in the pipeline for Misrata, including a port expansion and further improvements to the airport.

Although the city is prospering on a macro-economic level, what impact has this had on ordinary Misratans? Juha believes, “the average Misratan is feeling the trickledown effect of the economic boom taking place here. Whether it’s improved hospitals, greater employment opportunities or salary increases, our quality of life is good.”

Despite the economic growth taking place in Misrata, the city is still blighted by the ongoing dispute with its neighbouring town, Tawargha. Since the end of the revolution there have been countless violent incidents between both sides. The dispute is complex and personal, as the Misratans accuse the Tawarghans of aiding Ghadaffi forces during the revolution.

Human Rights Watch concluded that, “arbitrary detentions, torture and killings are widespread, systematic and sufficiently organised to be crimes against humanity.” Amnesty International also commented on the conflict claiming, “the Libyan authorities have failed to end forcible displacement and protect the Tawarghans from retaliatory attacks.”

Just 40km away from Misrata, the town of Tawargha remains uninhabited and its population internally displaced having fled their homes and fearing reprisal attacks by the Misratan militia. Despite a public apology from the Tawargha tribal elders and their plea for an end to collective punishment, the ongoing discord is emblematic of the post-revolution conflicts that are continuing to haunt Libya and a reminder of the desperate need for national reconciliation.

Although Misratans are often satirised by fellow Libyans for their business savvy mindset, Misrata is fast becoming the commercial capital of the country as many seek to bypass the capital. Despite being on the brink of ruin, Misrata has become an entrepreneurial phoenix rising out of the ashes and is an example of the vast potential Libya holds as it slowly begins to open up economically to the world.

ALSO SEE How to save Libya from total destruction