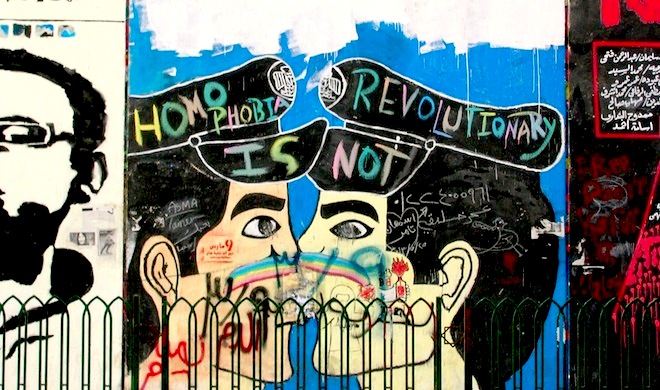 Cairo may have a thriving gay community. But the crackdown against homosexuals in Egypt continues, writes Ragnar Weilandt in this thought-provoking article about Egyptians' rejection of homosexuality.

A video of an alleged “gay marriage” went viral in Egypt. The arrest of all men involved and the authorities’ “medical inspection” on whether or not they are indeed homosexual is just the latest example in the recent crackdown on the Egyptian gay community. With president Sisi trying to appear even more Islamist than the Muslim Brotherhood, the situation for homosexuals in Egypt seems to have become worse than ever.

“Homophobia is not revolutionary,” said a slogan above a graffiti created in early 2013 in Mohammad Mahmoud Street that depicted two males kissing each other. Infamous for the brutal crackdown on liberal demonstrators during Egypt’s military rule between 2011 and 2012, the street has become a symbol of resistance against the Egyptian security forces and a gallery for graffiti, paying tribute to its opponents and victims. Including a graffiti that, albeit rather briefly, represented the Egyptian gay community.

“Homosexuality is neither a new nor a rare phenomenon in Egypt”

Homosexuality is neither a new nor a rare phenomenon in Egypt. Ostraca dating back to 1000 BC show homosexual acts, literary descriptions date back even further. Modern Egyptian writers from Nobel Prize winner Naguib Mahfouz to bestselling author Alaa Al-Aswany have written about homosexuality as well. The Siwa oasis close to the Libyan border had a tradition of male homosexuality and even of some kind of gay marriage, outlawed by King Fuad only in 1928.

Several tourist hot spots such as Luxor are known for young men prostituting themselves not only to middle-aged women but also to men from the West, a practice that is tolerated by inhabitants and authorities unless it becomes too obvious.

And in spite of regular crackdowns, Cairo has a thriving gay community. People meet at private parties and in certain clubs and bars known to be hot spots and therefore at constant risk of being raided. In the last decade, dating websites have become a popular way to connect, as they are perceived to be more secure. They are probably not – an underage student received a 17-year sentence for registering with such a site as early as 2004.

One of the most notorious crackdowns occurred in 2001, when 52 men were arrested on the “Queen Boat”, a nightclub floating on the Nile that was known to be a gathering space for the community. During their arrest, the “Cairo 52” as they were later referred to were subjected to torture and severe mistreatment. They also had to endure two highly publicized trials during which various Egyptian newspapers published their pictures, names and even addresses. Charged with “debauchery” as homosexuality is not technically illegal, 21 of the men were sentenced to three years in jail.

THE QUEEN BOAT incident ended a period of quiet tolerance towards the gay community. When Hossam Baghat, an activist working for the Egyptian Organization for Human Rights wrote an article criticizing the targeting of gays, his employer not only fired him but also openly denounced the victims. “Personally, I don’t like the subject of homosexuality, and I don’t want to defend them,” the organisation’s secretary-general told an Egyptian newspaper back then.

In his article, Baghat explained the sudden crackdown in 2001 as an attempt to divert public attention from the dire economic problems Egypt was facing at that time and the government’s inability to tackle them. He also described the targeting of gays as part of the regime’s strategy to present itself as the guardian of Islamic virtues in order to deflate the increasingly popular Muslim Brotherhood.

History seems to repeat itself. In spite of public rejection, activists had become a bit more assertive in promoting LGBT rights in the aftermath of the 2011 uprising. But since last year’s military coup, the authorities’ persecution of gays has increased significantly once again. After ending the one-year rule of the Muslim Brotherhood, president Sisi seems determined to show that he is even more Islamist than the Islamists. The president’s persecution of gays and other minorities such as atheists also helps to distract from the fact that his government has so far presented rather few ideas to improve the daily lives of the Egyptians.

“In spite of public rejection, activists had become a bit more assertive”

Targeting gays is a promising strategy as homophobia is deeply engrained in society. According to a 2013 Pew poll, 95% of the Egyptians feel that their society should not accept homosexuality. Those who dare to come out or whose sexual orientation is outed risk being outcast by family and friends. The anti-gay sentiment even includes people who are rather liberal minded in other respects. Many of those who criticize the brutality of the crackdowns do not object the crackdowns themselves.

RELIGION PLAYS A major role in the Egyptians’ rejection of homosexuality. But while Muslim clerics widely consider it “haram”, homophobia is by no means limited to Islam. The late Coptic pope Shenouda III called homosexuality “an abnormality” and “against nature”. In fact, Christian churches in Egypt are increasingly alienated by the recent and on-going legalization of same-sex marriages and other forms of recognized partnership in Europe and the United States.

The history of the graffiti mentioned above reflects the situation of gays in Egypt. Before becoming what was probably the country’s first and only graffiti against homophobia, its original motive was homophobic in itself. Originally it depicted two kissing policemen and the slogan said “cops are gay”. After some time other, less narrow-minded graffiti artists changed the slogan into “homophobia is not revolutionary”. But within weeks, this new version was overpainted.