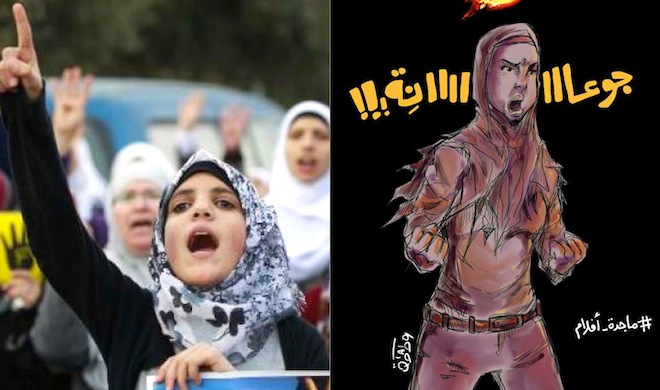 "Majida is the new Jordanian everywoman, representing a culture in flux, and a new generation of young people who are ready to change old paradigms," writes Your Middle East's Noor Ali about Majida, the fictional heroine who is challenging a society dominated by men.

With over two decades since the first strip of Emad Hajjaj’s Abu Mahjoob, a beloved national caricature who captures the essence of Jordanian wit and irony, Jordan is no stranger to social debate and controversy stirred up by comic strips.  Abu Mahjoob is an old fashioned Jordanian everyman, an amalgam of different aspects that every Jordanian can either identify with, or at the very least recognise as familiar. Abu Mahjoob is a tool for social commentary, tackling political, social, and economic issues, sometimes even simultaneously. An example of this is one of my favourite strips, called “Honour Killing”. It depicts a dishevelled looking Abu Mahjoob with gun in hand and his friend Abu Mohammad egging him on.

Abu Mahjoob: “I barged in and found him holding her! I startled him… so he fled, and took her with him! Man, my blood is boiling! What should I do?”

Abu Mohammad: “Get him and shoot him without a moment’s hesitation! Stealing a gas cylinder in this economic climate is considered an honour crime! And take care of that cylinder. Haram (pity her)…she’s innocent”.

The ever-rising price of energy has always been a heated issue in Jordan, and the price of gas is subsidised by the government, but still remains expensive.

“Even when Abu Mahjoob’s wife is portrayed as a strong woman, this is inherently negative”

The way Abu Mahjoob discusses the topic of women is not dissimilar to how the gas cylinder is portrayed in the above cartoon. In lieu with his character, Abu Mahjoob is male-centric and addresses a male audience; and women retain secondary roles in which they fluctuate between being plot devices, or simply inconsequential. Even when Abu Mahjoob’s wife is portrayed as a strong woman, this is inherently negative as she is shown as overpowering and exasperating, continuously nagging and picking on her husband. Her actions are shown as irrational and emotional, as if to represent this as an affliction of her gender.

THIS IS WHERE QATATO’S comic strip Yamiyat Majida (Majida’s Diaries) differs. It boasts a young, female protagonist. The dialogue is in colloquial Arabic, and uses a lot of, often humorous, Jordanian slang; this is what makes Majida’s Diaries even more appealing and accessible. In a span of two months, Qatato’s Facebook page likes have gone up to 24,000 by the time this article was written. Qatato (the artist Ahmad’s surname) says that 68% of page fans are female.

Majida’s Diaries is an honest portrayal of what it is like to be an ambitious independent Arab woman living in a contradictory society; a modern society in many aspects yet backwards thinking in others especially when pertaining to women. Majida’s mother encourages her to do well in her studies at university, whilst complaining about how headstrong she is, worrying all the while that she will not be able to be a good housewife someday. This tug of war between giving women the means to their social freedom and independence, while trying to ensure that society will frown upon their actions is endemic.

Majida’s Diaries include stories of love lost, heartbreak and emotional baggage, as well as unrequited love. There is even a spinoff where she seems to have appropriated Dr. Who’s TARDIS and travels through time. Majida happens to wear a hijab, but this doesn’t seem to hinder her or make her less of an independent woman. She is an avid gamer, binge-watches TV series online, and hates girly butterflies. Most of the topics discussed touch upon feminist issues, the most controversial of which always revolve around “honour”, a word that is frequently utilised to justify the patriarchal control of women, and ensure their unquestioning subservience in an inherently honour-shame culture.

IN ONE OF THE STRIPS, Majida talks about the use of misogynistic language and feminine slurs, asking why the most derogatory language in Arabic is likely to mention the person’s mother or sister. Even a light-weight insult to a man would be to say he is like a woman, he sits like a woman or is scared like a woman. One of Qatato’s comments on this post is how even when a woman is praised she is likened to a man, much like when it is said in English that a woman has balls, strong women are called sisters of men.

Another contentious topic is harassment, in “Deprived low-life” Majida and her friend Maram look like they’ve been running, and Maram comments on how running away from harassing low-lives is like running away from dogs at Guantanamo, “I feel like they’ve just come out of a cave and it’s the first time they’ve ever seen girls”, Majida retorts saying that it’s a good thing that a cleric doesn’t come out with a fatwa banning girls from running because it “stimulates men’s (sexual) instincts.” A clear reference to ridiculous restrictions placed on women in order to keep them from provoking male attention.

Qatato states in his comment on the post that Jordanian society is strange, with what he calls a sankooh – loosely translated as scum, or low-life – dictating the rules of honour when it comes to his sisters in order to control them, while harassing other women, and consequently disrespecting their honour. The comments on the post are varied and insightful, and show that this is a topic that many people find relevant and essential for discussion. Opposing opinions are stated, in a quasi-forum that would not otherwise exist, bringing together people from different social backgrounds who would not otherwise openly discuss this. If nothing else, Qatato’s work makes people think about gender related societal norms that are taken for granted, but are no longer relevant to today’s generation.

IT IS OBVIOUS from both the number of likes and shares that Qatato’s page featuring Majida has had an overwhelmingly positive response. Many of the page’s fans state that they check in often to see if there have been any new posts, some ask Qatato what inspires his work, while giving him suggestions for storylines, which he chooses from and creates. It is difficult not to be optimistic when reading posts such as these, as well as the positive comments on issues discussed in Majida’s Diaries. There is even a post by a male fan who asked Qatato to incorporate a male character who can act as an advocate for women’s rights.

Where Abu Mahjoob is the old Jordanian everyman of a past generation steeped in a culture of unapologetic machismo, Majida is the new Jordanian everywoman, representing a culture in flux, and a new generation of young people who are ready to change old paradigms. This is no mean feat considering that the artist is an Arab man. He is a champion of feminism and poignant social commentary, and his creation is challenging society’s perceptions, one comic strip at a time.