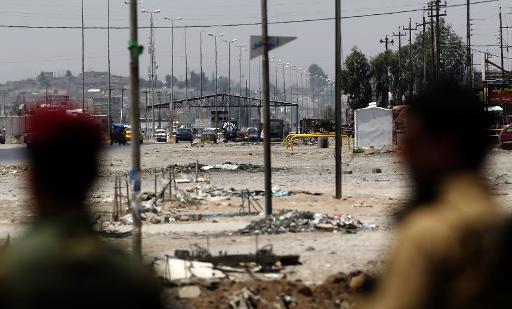 The extremist group has destroyed shrines, churches and precious manuscripts in Mosul, Tikrit and other areas of Iraq it controls and excavated sites to sell objects abroad, in what UNESCO chief Irina Bokova described as “cultural cleansing”.

In July, for instance, IS rigged the Nabi Yunus shrine in the northern city of Mosul — revered by both Muslims and Christians as the tomb of Prophet Jonah — with explosives and blew it up.

The radical group advocates an brutal and strict interpretation of Islam, and considers worshipping at graves to be tantamount to idolatry.

“There were explosions that destroyed buildings dating back to the Assyrian era,” Baghdad museum director Qais Rashid said according to a translation from Arabic into English, referring to the once powerful, ancient empire.

“Assyrian tablets were stolen and were suddenly found in European cities,” he added, warning that the sale of such artefacts was being used to “finance terrorism”.

“There are international mafias… that inform Daesh of what can be sold,” he said, referring to an alternative name for IS.

Rashid acknowledged that nothing could yet be done to prevent further destruction and looting in IS-controlled territory. “We have to wait and do everything to retake it,” he said.

Iraqi authorities have yet to put together a detailed list of what exactly has been destroyed or looted, but Rashid gave a few examples of recent incidents.

“The Mosul museum, the second most important in Iraq, suffered an attack from Daesh and they also attacked the staff from the museum,” he said.

In another incident, “Daesh gathered over 1,500 manuscripts from convents and other holy places and burnt all of them in the middle of the city square,” he added.

Bokova said she had alerted all UNESCO member states, “as well as the main museums around the world and the art market, Interpol, the World Customs Organisation… by calling for the utmost vigilance over objects that could come from the current looting of Iraqi heritage.”

She added that UNESCO had handed over the geographical coordinates of all key heritage sites to countries engaged in air strikes over Iraq to fight IS, to prevent further damage.

The jihadists have also committed widespread atrocities against locals, and experts acknowledged that warning about heritage sites when people were dying could raise eyebrows.

“When people die in their tens of thousands, must we be concerned about cultural cleansing?” asked Philippe Lalliot, France’s ambassador to UNESCO.

“Yes, definitely yes…. It’s because culture is a powerful incentive for dialogue that the most extreme and the most fanatical groups strive to annihilate it.”