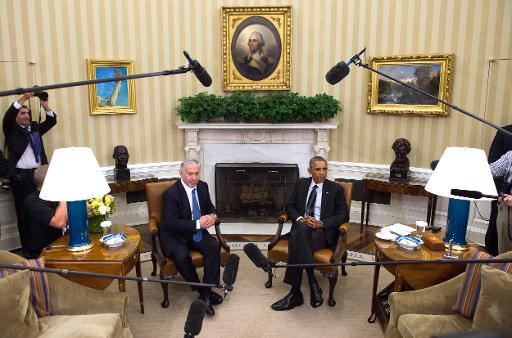 A skeptical Israeli Prime Minister Benjamin Netanyahu on Wednesday directly warned US President Barack Obama not to accept any Iran deal that would allow Tehran to become a "threshold nuclear power."

Several hours after Netanyahu emerged from the White House after 90 minutes, the White House publicly rebuked the Israelis over a plan for 2,600 new settlements in annexed east Jerusalem.

Netanyahu had earlier used a photo-op with journalists in the Oval Office to deliver a broad hint that his government remained concerned about the direction of talks between Iran and world powers on constraining the Islamic Republic’s nuclear program.

The leaders were meeting for the first time since their subordinates swapped some of the most pointed rhetoric in years between the allies, over the Gaza crisis.

While stressing the “unshakeable” bond between Israel and the United States, Obama and Netanyahu have often struggled to keep their differences on key issues under wraps, and Wednesday was no different.

White House spokesman Josh Earnest said Washington was “deeply concerned by reports the Israeli government has moved forward” with planning for settlements in a “sensitive area” of east Jerusalem.

He said Israel would send a “very troubling message” by following through with the project and in noticeably blunt language said that the step was contrary to Israel’s stated goal of negotiating a permanent final status agreement with the Palestinians.

“This development will only draw condemnation from the international community, (and) distance Israel from even its closest allies,” Earnest said.

He added that it would also “poison the atmosphere” — not only with the Palestinians but with “the very Arab governments” with which Netanyahu has said he wants to build relations.

Obama raised his concerns during the meeting with Netanyahu, Earnest said.

Before the talks, the Israeli leader, who is deeply skeptical of Obama’s bid to broker a deal on constraining Iran’s nuclear program before a November 24 deadline, delivered a clear signal that Israel is dismayed at the outlines of a possible agreement.

“Iran seeks a deal that would lift the tough sanctions that you worked so hard to put in place and leave it as a threshold nuclear power,” Netanyahu said, as he sat next to Obama.

“I fervently hope that under your leadership that would not happen,” Netanyahu told Obama.

Netanyahu had said at the United Nations that Iran was trying to “bamboozle” the world into sealing a nuclear deal that would leave Tehran with the capacity of thousands of centrifuges to enrich uranium.

The nuclear “threshold” is the point at which a nation is considered to have the radioactive material, equipment and know-how to quickly produce a nuclear device, but has not yet taken the decision to do so.

Netanyahu’s remarks on Iran highlighted the long-standing disagreement between Israel and the Obama administration on the nuclear talks involving Tehran, the permanent five members of the UN Security Council and Germany.

Washington wants to extract concessions from Iran — which says its nuclear program is peaceful — in exchange for sanctions relief.

But Israel wants a complete dismantling of what it calls Tehran’s “military nuclear program” and for Tehran to be left with zero enrichment capacity after a deal.

The US leader has said in the past that such a “perfect” deal is unlikely.

Israel says it reserves the right to take military action against Iran’s nuclear program if a deal is not reached to dismantle it.

Obama said that he also wanted to discuss the rebuilding of Gaza with Netanyahu following the war with Hamas this year that killed more than 2,000 Palestinians and 73 Israelis, most of them civilians.

“We have to find ways to change the status quo so that both Israeli citizens are safe in their own homes and school children in their schools, from the possibility of rocket fire, but also that we don’t have the tragedy of Palestinian children being killed as well,” Obama said.

Netanyahu backed Obama’s campaign against the Islamic State group in Syria and Iraq, but said the effort to prevent Iran obtaining a nuclear weapon was “even more critical.”