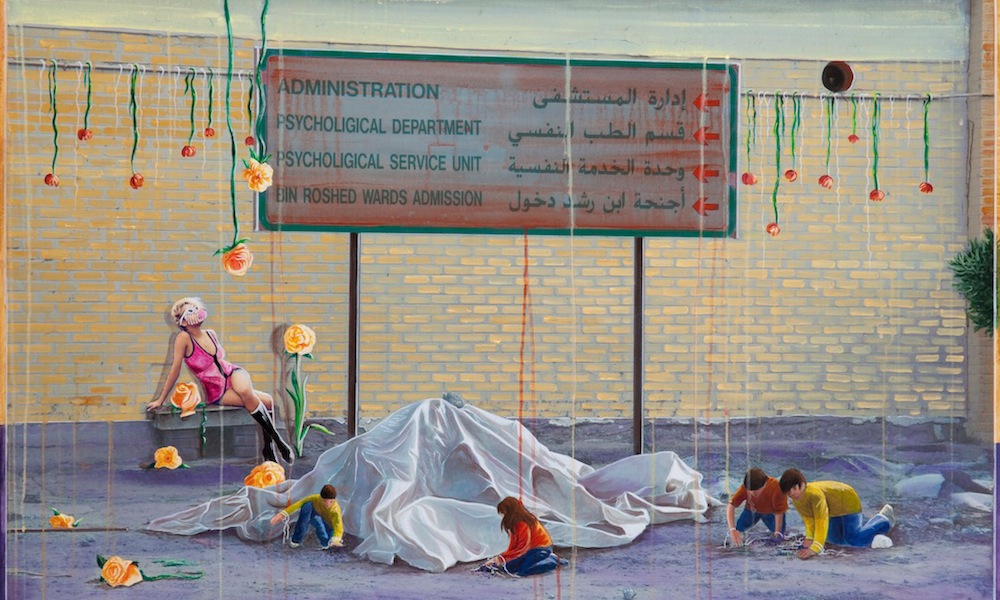 "Artists have a huge responsibility to reflect these tumultuous times," says the popular (and provocative) Kuwaiti-Syrian artist Shurooq Amin in this Q&A with Your Middle East.

YME: With your work, you tend to enter private social spheres, like passion and love. The Arab world is often described as socially conservative, do you feel like you, as an artist, have a responsibility to tackle sensitive issues in that environment?

Shurooq Amin: Absolutely. Art is one of the best weapons with which to tackle sensitive issues in the Arab world, from social to cultural to political and even religious topics. For me, I address issues that move me or anger me with a sense of injustice in some way: love in the Muslim world, child marriages, gender issues, homosexuality, subjective censorship, political stagnation, etc. I feel that it is a huge responsibility for me to tackle these issues and open a dialogue in society with the hope of instigating social change. Art is not only a reflection of society, but it also affects society. And if a person has the opportunity to influence cultural direction positively, then it’s their responsibility to do so.

YME: You have a Kuwaiti father. Tell us how your work is received in Kuwait?

SA: I’ve gone through a roller-coaster ride of love and hate within my country Kuwait. Since my show was shut down in 2012, there has been a black and white response from my people: those who disapprove of what I do see me as some sort of a scandalous uncontrollable rebel (I think people fear that which they cannot control); but those who understand my message and support me, view me as a relevant “visionary”. Since I was awarded the Arab Woman Award for Artist of the Year in 2013, however, many of my opposition have come around and have become some of my best supporters, because I’ve proved to the world that my work maintains its integrity to the truth and I’m here to stay.

YME: In some of your works, like Piece of the Pie, you seem to confront the role of women in Arab society. You have also tackled the difficult issue of child marriages. Do you see yourself as a human rights activist and a feminist?

SA: I try my best to be involved in human rights activities, whether it’s by volunteering, or donating, or writing about issues, or painting about them, or using my position/name to help in any way. Is being a strong, independent, outspoken, fearless, ambitious woman with a mission the same as being a feminist? I’m not sure what feminism entails anymore. Personally, I abhor labels. I just do what I do, as long as I believe it’s the right thing. I feel strongly about justice in the world, so I will keep fighting for the underdog, whether that victim is a woman, child or man.

Piece of the pie

YME: It’s currently a difficult time in the Middle East, with the Islamic State controlling vast areas and turmoil in Yemen and Libya. What’s your opinion about the role of the artist in this climate? Will local artists play an even more important role in light of what’s going on?

SA: The more difficult our region becomes in terms of living in it peacefully, the more powerful the role of art becomes, because it is a universal language that transcends geography, religion and politics. Artists have a huge responsibility to reflect these tumultuous times. We are documenting history. Decades from today, the people of the future will look back at the art of this time and this region and be able to see a tapestry of images that scream with the voice of the people. This is a humbling thought. And a responsibility that I hope to live up to.