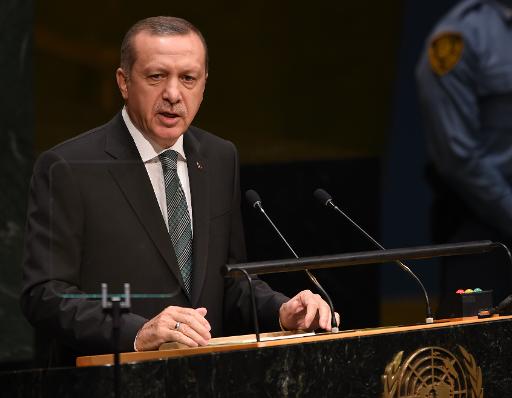 Turkish President Recep Tayyip Erdogan reacted angrily on Saturday to comments by US Vice President Joe Biden that Turkey and others in the region had financed and armed jihadist organisations in Syria.

“If Mr Biden used such language, that would make him a man of the past for me,” Erdogan told a press conference in Istanbul.

“No one can accuse Turkey of having supported any terrorist organisation in Syria, including IS,” he said, referring to the Islamic State jihadist group.

He was responding to comments made by Biden at Harvard University on Thursday, in which the vice president bluntly criticised allies in Turkey and the Arab world for supporting Sunni militant groups, such as IS and the Al-Qaeda-affiliated Al-Nusra.

“Our allies in the region were our biggest problem in Syria,” Biden said in response to a question about whether the US should have acted more quickly in the region.

“The Turks are great friends and I have a great relationship with Erdogan. The Saudis, the Emiratis etc. But what were they doing? They were so determined to take down (Syrian President Bashar al-)Assad and essentially have a proxy Sunni-Shia war that they poured hundreds of millions of dollars and tens of thousands of tonnes of weapons into anyone who would fight against Assad.

“Except the people being supplied were Al-Nusra and Al-Qaeda and extremist elements of jihadis coming from other parts of the world.

“We couldn’t convince our colleagues to stop supplying them.”

Biden went on to say that these countries had now “woken up” to the threat from IS and other militants.

“It took a while for Turkey, a Sunni nation, to figure out that ISIL was a direct and immediate threat to their well-being,” Biden said, using an alternative name for IS.

Turkey’s parliament authorised military action against insurgent groups in Iraq and Syria on Thursday, and also allowed its territory to be used by NATO forces, although it has yet to outline concrete plans for action.