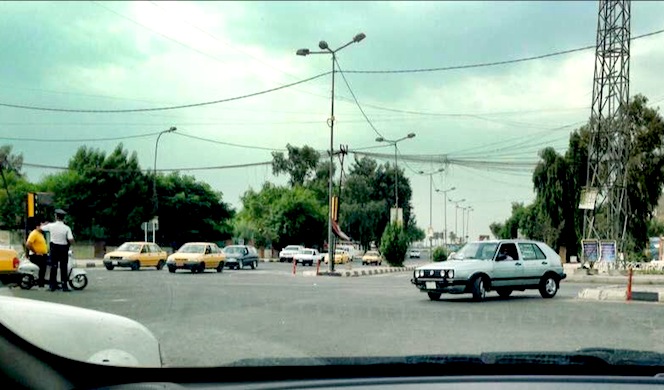 A group of young Iraqi bloggers and activists have started a campaign on social media using the hashtag #Baghdadisfine. The campaign was started to counter rumours that the Sunni Muslim extremist group, the Islamic State, was an immediate threat to Baghdad.

“Baghdad is fine” (Ø¨ØºØ¯Ø§Ø¯ Ø¨Ø®ÙØ±). This is how a group of online activists in Baghdad recently countered all the fast moving rumours about how Sunni Muslim extremists from the Islamic State group were closing in on the country’s capital. The phrase got a hashtag and became a campaign on Arabic-language social media, complete with photos and videos of Baghdadis going about their daily business, unafraid and behaving as normal – despite the rising toll of deadly bombings in the city.

There had been rumours that the extremist Islamic State, or IS, group, that had been fighting in nearby parts of Iraq since early June, was approaching Baghdad and that the group was threatening planes at Baghdad airport. But the pictures and video clips – mostly posted on Facebook, which many Iraqis use for their daily news updates – showed people shopping in markets, socializing, going to parks and doing other normal, daily activities.

“The rumours succeeded in that they created a state of terror in Baghdad,” says Hassan Hamid, one of the bloggers and online activists who took part in the campaign. “There was a lot of fear and many people were talking about how a surprise attack could come at any minute.”

“So we got the idea for the campaign because we believed that our beloved city needed something positive,” explains Ali Qais, one of the Iraqi bloggers behind the campaign. “One of the other bloggers suggested the hashtag and it was his idea that we all become media spokespeople to serve Baghdad.”

The bloggers involved asked all their supporters to go out into their own neighbourhoods and take photos or make video clips and publish them with the neighbourhood’s name and the hashtag, #Baghdadisfine.

“This will create positive energy and work against false rumours that are circulating,” Qais said.

The Iraqi bloggers also made good use of the dreaded selfie, or self portrait, posting pictures of themselves posing alone or with friends and family. “It almost felt as if through this campaign we were able to express our youth,” notes Samer Salah, one of the other bloggers involved in the campaign. “We also wanted to counter those who say we don’t care about anything while bombs and fighting are going on around us.”

The campaign got a good response from locals in Baghdad as well as from Iraqis living abroad and others started contributing material to the campaign too.

Despite the popularity of the campaign though, many wonder what it can really change on the ground in Baghdad. There have been an increased number of car bombings in Baghdad and elsewhere around the country.

“Bombings are still going on as well assassinations,” says Haider Ahmad, a local journalist. “So we should ask: is Baghdad really fine? It’s what everyone wants the city to be but that can’t happen just with words. We need deeds too. Obviously the aim of this campaign was to counter the IS group’s rumour machine. But what if the IS fighters do start to advance on Baghdad? We haven’t heard too many reassuring statements from the authorities.”

Ahmad is particularly upset with local authorities who don’t provide locals in the city with any realistic information.