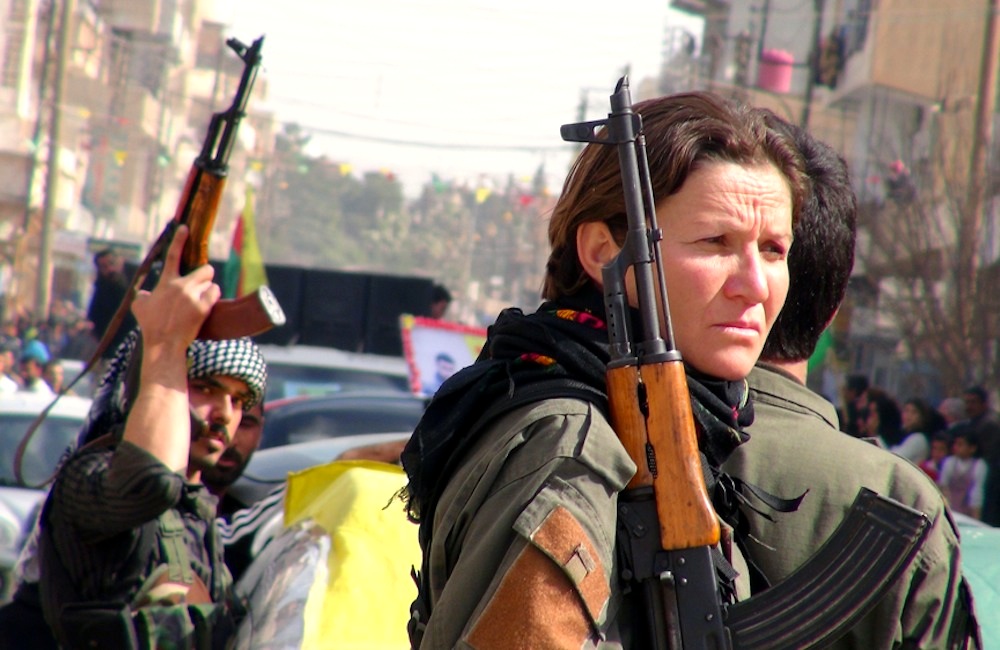 The Kurdish fight in Syria slowly turns international on the ground as an unprecedented number of foreign volunteers join the pro-Kurdish militias to fight against the Islamic State (IS) jihadists.

According to local sources inside Syria’s Kurdish “Rojava” region, however, 10 American citizens as well as hundreds of non-Kurdish volunteers comprising Syrian Arabs, Turkish citizens and Europeans have already joined the People’s Protection Units (YPG) fighting against IS jihadists.

“I give no figures, but there is a considerable number of Westerners fighting in the ranks of the YPG as well as European women comrades who’ve joined the Women Protection Units (YPJ). There are many Turkish comrades too,” said 28-year-old Kristopher Nicholaidis, who left Greece and joined YPG in Syria five months ago.

NICHOLAIDIS WAS AN ACTIVE local artist back in Greece where he used his art and politics to defend migrants, including Muslims.

“I come from a political family and I am a democratic socialist. I used my art and politics to defend the Muslim community from attacks initiated by fascists of the Golden Dawn party, but I consider IS jihadists as 21st century fascists posing a greater global threat as they barbarically spread Islamofascism on an international level,” he said. “I believe that the YPG is therefore leading the greatest anti-fascist struggle of our time by fighting against IS jihadists. I joined this struggle to fight against global fascism in defence of democracy and peace in Kurdish Rojava.”

Arsalan Celik, 26, studied political science at one of the most prestigious Turkish universities but left and joined the YPG April this year.

“I am not Turkish-Kurdish, I am Turkish from the city of Mersin. I came here because the IS jihadists come from all over the world instigating a war against humanity and my government helps them. I wanted to make a practical stance against IS and YPG was the only democratic militia I found in the region fighting back against these jihadists,” he said.

“I have seen many Syrian Muslim Arabs as well as left-wing Turks fighting against IS in the ranks of the YPG and YPJ militias, but we have not made headlines as much as our American comrades,” he said light-heartedly, adding, “We fight against IS jihadists to defend the democratic values of this Kurdish-led revolution because only the Kurds are now able to bring peace to Kurdistan, Syria and Turkey.”

CELIK IS NO STRANGER for Syria’s Kurds as tens of Turkish men and women have joined YPG and YPJ since last year, and some of them have lost their lives.

Serkan Tosun was the first Turkish YPG fighter killed when he fought to repel jihadist attacks to defend the predominantly Kurdish city of Serekaniye (Ras Al-Ain) in September 2013.

30-year-old Nejat AÄÄ±rnaslÄ±, a Turkish academic, was killed two weeks ago when he fought in the YPG ranks in defence of the city of Kobane.

Zuleikha Muhammad of Rojava Martyrs’ Mothers Committee, whose only son joined YPG and was killed last year, said: “The international volunteers are not ‘foreigners’ as some describe them because we do not consider them as ‘foreigners’, they are our children and Rojava is their homeland.”

She said: “We love international volunteers as our own children because they are fighting against IS gunmen to defend us and they are martyred like our sons and daughters to defend Rojava revolutionary cause for people’s fraternal relations.”

Azad Hussein, YPG captain in the town of Jaz’a, said: “YPG fighters are majority Kurdish but Syrians from different political, religious and ethnic backgrounds also join. There are few foreigners too, that is right.” But he declined to give exact figures of the YPG foreign fighters, adding that that YPG selection of foreign volunteers is a “complicated process”.

“We welcome international comrades who are qualified fighters and understand our cause too. However, we reject those wanting to join us just because they are disillusioned with their lives and look for some sort of adventure. The latter also include some European Kurds. We reject those people and we have already turned down many of them at our border bases,” Hussein said.

19-YEAR-OLD HERISH ALI, a British-Kurd, said he requested to join the YPG along with five other European Kurds in August but YPG border guards rejected them on the Iraq-Syria border.

“We met the YPG fighters and stayed with them at their Sihela border crossing to Iraqi Kurdistan. They were nice and we thought it was awesome to join them, but they rejected us when we revealed that we are students and we have dual nationalities,” Ali said.

He added: “We told them that we feel degraded because it was like we are not capable men for this fight, but they kept refusing our arguments and said we should go back to Europe and study. Then, they drove us to the nearby Iraqi Kurdish peshmerga checkpoint where the peshmergas too rejected taking us as volunteers.”

Some left-wing writers in the West have begun to compare YPG and YPJ militias in Syria to the International Brigade and POUM militia that operated during the 1936 Spanish civil war, but this is not how the YPG perceives itself.

“We are not communists nor do we call for a separatist Kurdish nation-state. We are democrats advocating the third way in Syria based on the Democratic Con-federalism philosophy of Abdullah Ocalan. The YPG is a people’s militia and people are free to advocate any ideology,” said Bahoz Berxwedan, one of the YPG commanders who run political education lectures in the Al-Hasakah province.

“Any freedom-loving democrat in this world can join us regardless of their religion, ethnicity, and ideology, as long as they accept our main principles of gender equality, peaceful coexistence and self-rule autonomy for all communities,” he explained. “This is why YPG fighters include Kurds and Arab Muslims, secularists, Yezidis, Syriac Christians and some American and European comrades too.”