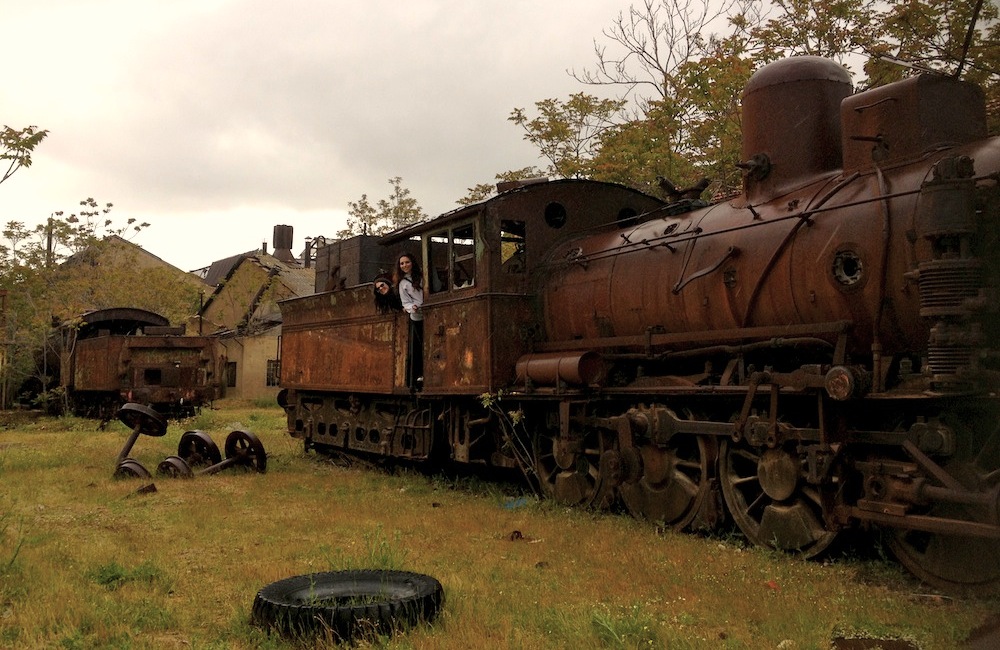 "If we can’t have the actual trains taking us along the Mediterranean, can we at least tell the story of a time when we did?" asks Lebanese blogger Farrah Berrou.

Last year, a few friends and I took a detour to the Rayak Train Station, located in the Bekaa Valley past the Rayak Air Base. Rayak (pronounced Riya’) is home to one of the many abandoned train stations (and a factory) in Lebanon. The line, that used to run from Beirut to Damascus, was the first railway built in Lebanon back in 1891. This was before the country was “independent” and still under Ottoman rule. The dilapidated remains of the station are frozen in time. It’s a lot like how you would imagine a war zone after a ceasefire; everything is where it was before the war, only it’s aged, rusted, and beautifully decayed.

THE CARETAKER on site told us that a permission slip from Mar Mikhael in Beirut was needed to access the grounds but we pleaded and he allowed us to roam around a bit while advising us not to enter any of the buildings because it was dangerous due to the rain. When we asked him why the supposed project for a Rayak Train Station Museum seemed to be put on hold, he seemed quite discouraged. The way he put, the project, though ambitious and worthy, needs financing and the people in charge of our country aren’t willing to fork it over for something that isn’t seen as a priority.

It appears that if this project were to ever see the light of day, it would need some wealthy private investors. It is sad that our country does not seem concerned with the preservation of such sites – remnants of our rich history. If there are no plans of renovation or innovation when it comes to public transportation, we should at least cherish the graveyards of the days when we did have such machinery running along our coast.

Elias Boutros Maalouf from Ecuador (familial roots from Rayak) put together a study called “The Rayak Train Museum Proposal” in 2009. The document, in French, English, and Arabic, describes a plan for a museum for all the Lebanese railways. You can check out the whole thing here. Some tidbits from the proposal:

* “By 1912, it was a vital cog in an intercontinental rail system that spread throughout Europe and Asia and, by the 1940s, linked Europe and Africa.”

* “In the beginning of August 1895, the first train took off from the port of Beirut to Rayak railway station.”

* “Rayak was famous for having one of the biggest train factories in the world at that time. It was later well known for designing and reassembling old steam engines that worked on charcoal to work on fuel.”

* “In 1976, the railway was shut due to the civil war, ending more than 85 years of success and achievements.”

* “In World War II, this factory was used as a military base in which military weapons were fixed. At that time a group of engineers from both the train factory and Rayak’s Military Airbase were assigned to build airplanes for the French military. Some of the airplane parts were manufactured and designed in Rayak’s train factory. They were then taken to Rayak airport to be assembled to their new chassis, and, Rayak’s first airplanes conquered the sky.”

More than a year after my visit, I contacted Mr. Maalouf, co-founder of Train/Train, for an update on the NGO’s recent efforts. As of today, they have proposed three projects to the Railway Company: The Rayak Railway Museum, a Railway Archive and Research Center at the Mar Mikhael train station, and restoring the Byblos-Batroun line. Besides the fact that I didn’t know we had a Railway Company, these three projects don’t seem like too much to ask for a country that has such a rich railway history. If we can’t have the actual trains taking us along the Mediterranean, can we at least tell the story of a time when we did?

“…can we at least tell the story of a time when we did?”

NEGOTIATIONS OF these proposals (with the Railway Company) have gone on for a year now and they are to be filed this week. “Hopefully, they will be approved by the end of November or we will be taking action,” says Maalouf. “If they won’t allow projects that push for the implementation of public transportation, that means they don’t respect our right of having public transportation. Our first action would be to press charges on the decision makers followed with a media campaign and movements on the street.”

With events and supporters increasing in number, a sudden burst of online media coverage of the trains’ possible return, along with the photograph exhibition spread across the walls of the Rafik Hariri International Airport, it seems Train/Train has had a busy year. “Many ministers and deputies have been following our events and attending our talks and workshops,” says Maalouf. Perhaps, 2015 will be the year of the Train for the Lebanese people.

Would the train cross St. Michael Bridge again in “2013” ? pic.twitter.com/K1KIlVC2Xi

You can follow Train/Train Lebanon on Twitter and check them out on Facebook. Another site to check out is CEL – Chemin de Fer de l’Etat Libanais; it has information on the railways including timetables, postcards, and photographs all collected by Børre Ludvigsen.

A version of this article originally appeared on Farrah’s blog bambisoapbox.com/