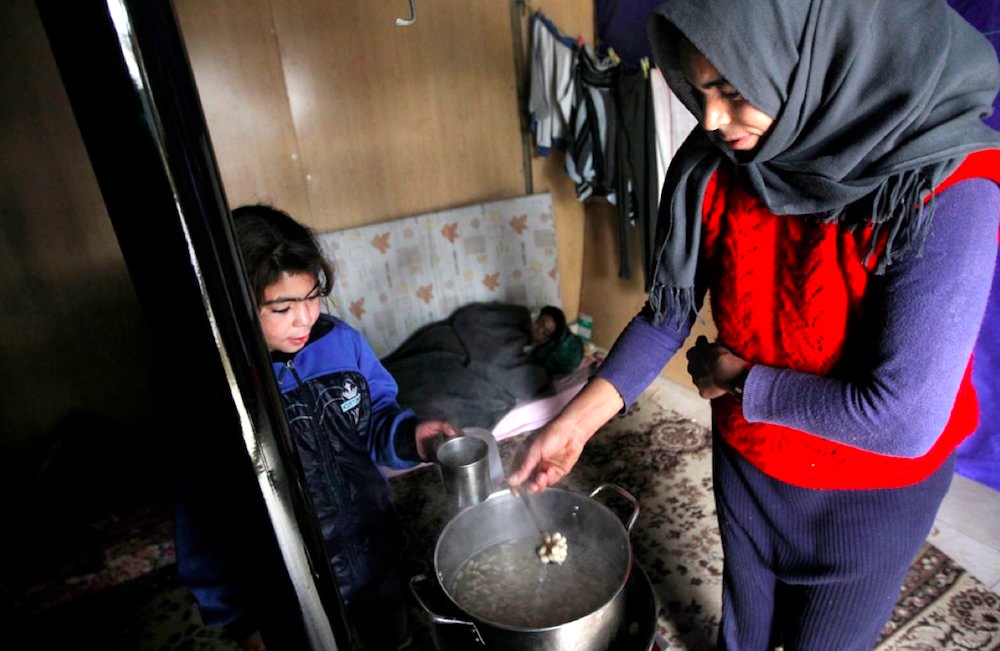 For more than 60 years UNRWA has been providing housing and direct aid for the Palestinian refugees in Lebanon. The refugees have no prospect of returning to Palestine, nor being integrated into Lebanese society. A number of Western officials now say that the international community deliberately sponsors the limbo via UNRWA.

All his life Salah Salah has been struggling for the Palestinian cause. His office in the Malaab area in Beirut, Lebanon is full of artefacts ranging from Cuban flags from his time as PLO’s representative in the Caribbean country to drawings of the Palestinian cartoon-icon, the child Handala. In the middle of the memorabilia sits 78-year-old Mr. Salah, the living proof of the presence of Palestinian refugees in Lebanon since the 1948 Arab-Israeli War. He was 12-years-old when his village on the shore of Lake Tiberias came under attack and his life as a refugee began.

LIKE MOST PALESTINIANS, Mr. Salah can’t help but feeling split on the issue of UNRWA (United Nation Relief and Works Agency for Palestine Refugees in the Near East), the UN agency founded in 1949 set to help the refugees until the crisis was solved. The organization was founded with a two-year mandate, which has been renewed every time it has expired.

“The Jews got Israel and we got UNRWA,” says Mr. Salah, echoing a Palestinian saying often heard in the 12 Palestinian refugee camps in Lebanon.

The camps are scattered across the country and are home to more than 150.000 people. The exact number of Palestinian refugees residing in Lebanon is disputed, but UNRWA estimates the number to be between 260.000 and 300.000.

“The Jews got Israel and we got UNRWA”

Mr. Salah’s oxymoronic view on UNRWA is a result of the fact that the organization still exists, symbolizing the UN’s inability to find a just solution to the Palestine/Israel-conflict, which the UN itself has a large share in creating. On the other hand, though, UNRWA still provides vital services to the Palestinian refugees.

“It is not UNRWA’s responsibility to find a solution. Their responsibility has always been to provide shelter, social security, health care, and education for the refugees,” says Mr. Salah, who is the present political leader of the PLO in Lebanon, but also a founding member of PFLP.

He continues: “UNRWA knows how hard the situation is for the Palestinians, so they should work by all means to improve the relief and services for the refugees. But instead of their services being increased, they are now decreasing their services.”

And it is true that UNRWA’s core budget does not match the growing number of Palestinian refugees in the same way it used to. According to the former UNRWA national director in Lebanon, Ann Dismorr, who stepped out of office on October 1st this year, there is a number of structural reasons for this unfortunate mismatch, which in some cases cause “unacceptable” poor services at UNRWA facilities.

“Because UNRWA lives off of voluntary contributions it is actually up to the international community if it wants to live up to the obligation or not. UNRWA is struggling with a massive lack of funding, and right now the organization is not living up to its mandate to a satisfying extent,” says Ann Dismorr.

UNRWA was founded during the political turmoil in the wake of the Arab-Israeli War and therefore it was decided that the organization’s budget should be kept separate from the main UN budget. To this day this means that the member states of the UN are free to choose whether or not they want to contribute, and how much. Out of UNRWA’s core budget of $550 million last year Western countries funded more than 95 percent. The US was the biggest single contributor with its $130 million donation.

THE SECOND STRUCTURAL challenge UNRWA faces is caused by another decision from the late 1940s. Because of the general notion that the Palestine/Israel-conflict would be solved within a reasonable time period, the decision was made that the descendants of the original approximately 750.000 Palestinian refugees should be granted refugee status and thereby be given the same rights from UNRWA. Since the conflict is yet to be solved, UNRWA by January 1st 2014 registered more than 5 million Palestinians as refugees in its field of operations in Syria, Jordan, Lebanon, Gaza and the West Bank. This increase naturally puts more pressure on the UN member states to donate.

Especially among the Palestinian refugees living in Lebanon these factors have become highly important since the refugees there face a number of discriminatory laws and a general lack of basic civil rights. To name a few they are allowed neither public health care or education, they cannot work in the public sector or the army, there is an actual list of 30 other jobs they are barred from, they cannot own property, and they are not allowed to organize or go into politics. This, naturally, creates a dependency on UNRWA’s services.

“We live in a region which by the day becomes more and more complex and where unrest is a part of everyday life. That means that we in Syria, Iraq, Yemen, and Lebanon now have competing crises – and the donors don’t have unlimited funds. It is becoming a more challenging environment for UNRWA to work in,” says Ann Dismorr and stresses the fact that it is “absolutely not” helping the Palestinian cause that it is considered the old crisis in the region.

“It’s not even an impasse we are witnessing. It is actually a continuing aggravation of the situation for the Palestinians here,” says Ann Dismorr.

According to a number of Western diplomats and officials in Beirut, who all speak on condition of anonymity, UNRWA serves more than just the purpose of providing aid. The funding of UNRWA is just as much a political tool used in a broader context in Lebanon and the region, they say.

“If we didn’t have UNRWA we would almost certainly have a continuous conflict in Lebanon. And if that was the case the Palestinians would be – even more than they already are – radicalized and supportive of groups such as Islamic State,” says one Western top diplomat who still, though, refers to the situation as “clearly disgraceful”.

The current uncertain situation in Lebanon is mainly caused by the war in Syria, which so far has sent well over a million refugees into Lebanon, a country half the size of Wales. Add to that a number of spillover conflicts between militant Islamists and the Lebanese army and Hizbollah.

“Right now nobody wishes to do anything about the Palestinians’ situation or try to push the Lebanese government into doing anything, because Lebanon is on the brink of chaos. Focus is on keeping the status quo and keeping Lebanon together in one piece. That simply gives the Palestinian refugee issue a lower priority.”

A former Western diplomat and now official with the UN explains UNRWA’s services this way: “The aid UNRWA provides is basically to make sure that the Palestinians don’t go crazy. UNRWA definitely serves a purpose of silencing the Palestinians – and that goes for the Palestinians in the whole region. We, the donor countries, are putting millions of dollars into this, and by doing that we are sustaining the conflict and the situation on the ground, where we don’t see any real progress. With the continuing funding of UNRWA the donor countries are actually recognizing the current way of operating. So in that way the Western support is highly political.”

ONE THING is the present unrest in the region, but according to one source the lack of Western interest in the refugee component of the broader Palestine/Israel-conflict also comes out of diplomatic considerations.

“The Palestinians have many friends but no allies. There are basically no Western countries that want to risk their relationship with Israel by working on a settlement of the refugee issue, because the only thing to be won is a loss of friendship with the US. So in that perspective it is fair to conclude that UNRWA – and the funding hereof – is contributing to the Palestinians’ Lebanese limbo,” says the source, who for years has been working with the Palestine/Israel-conflict for a number of European governments.

For decades UNRWA has been the subject of intense debates. One argument is that UNRWA by its very existence is prolonging the conflict, since the recognition of the Palestinian refugees and their right to return to their homeland prevents a pragmatic solution to the conflict. The pragmatic solution lies in the fact that it is unlikely for all the Palestinians to return, since there are now more than 7 million Israelis living in the disputed area, so the demand should be taken out of the negotiations or at least be altered.

The structural – and now historic – decisions about UNRWA are without a doubt making the issue of the Palestinian refugees in Lebanon “extremely complex”, says the Middle East scholar Leila Stockmarr from Roskilde University in Denmark.

“On the one hand you can say, that if Western government find the Palestinian refugees’ right to return indisputable, then UNRWA is simply underscoring this right. It is part of UNRWA’s mandate that the organization can’t be dissolved before there is a solution to the conflict. On the other hand, this situation keeps many Palestinians claiming their rights, even though, for most of them it is highly unlikely that they will return,” says Leila Stockmarr.

Most Palestinians in Lebanon origin from northern Israel, which is within the Israeli 1967-borders, i.e. not within what is being negotiated about in the two-state solution.

According to the former UNRWA National Director in Lebanon, Ann Dismorr, it is not all bad, though.

“If UNRWA was not present in Lebanon the Palestinian refugees would not have anything. They would be 69 schools and 7 health clinics short, and it’s not like the Lebanese state would step in and fill the gap. That is the harsh reality. The only thing that can stop the Palestinian suffering is if the international community works harder to find a political solution instead of turning their pockets inside out in search of more money,” says Ann Dismorr.

ACCORDING TO UNRWA approximately 66 percent of the Palestinian refugees in Lebanon live for less than $6 a day, but if the organization disappeared overnight that number would go up 14 percent. Add to that the advocacy work that UNRWA is doing to create awareness about the Palestinian refugees. One UNRWA staff member explains it this way: “We might be a band-aid – but we are a big flashy one!”

For 78-year-old Salah Salah advocacy and direct aid from UNRWA has not changed the fact that his temporary exile in Lebanon has turned into 66 years as a refugee. And there is nothing changing his feelings of being treated unjust.

“It is mainly the responsibility of the US and the Western European countries that Israel was created. Therefore it is also their responsibility to take care of the refugees their actions caused. They are responsible that I to this day am a refugee, and they have to recognize that responsibility,” says the PLO-leader.

Ann Dismorr was interviewed a few days prior to her departure as National Director of UNRWA in Lebanon.