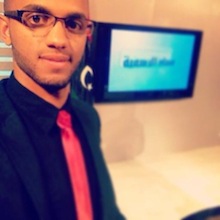 About a month ago, we sadly received the news about the death of our colleagues Tawfiq Bin Saud (18 years) and Sami Al-Kawafi (17 years). On a Friday night, armed men targeted the car that was driven by Bin Saud and killed him and Al-Kawafi, while a third colleague sitting in the back seat was spared. Bin Saud and Al-Kawafi were among the most active youth leaders in Libya. Despite their young age, they had big dreams and the capability to achieve their goal of peace in their homeland. They participated in numerous youth initiatives, spending long hours on the streets carrying banners that denounced violence. Last month, Bin Saud and Al-Kawafi paid the price for their dedication to their homeland with their lives. Despite this tragedy, we – the youth of Libya – must continue to carry the banner of peace and shall march forward without surrender.

GIVEN THE VERY REAL threats facing youth activists, I often feel insecure and worry that I – and youth activists in general – may be targeted anytime and anywhere. However, like many youth, I have confidence in my ideas and believe that nonviolent action is the right path. Nothing will stop us. We will never give up our efforts as community leaders and peace makers. If we do not strive to oppose violence, then who will? I dream of living in a peaceful homeland, and in order to achieve this dream, I must fight for it. I believe that young people can be the peace builders of today. The blood of the innocent is our incentive to continue the march for peace.

“Despite this tragedy, we – the youth of Libya – must continue to carry the banner of peace”

There are many youth initiatives inside Libya, perhaps one of the most prominent of which is Enough Violence (#ÙÙÙ_Ø¹ÙÙØ§), launched on 15 July by a group on Facebook. The peace initiative was met with enthusiasm from thousands of young people, with civil society activists pasting posters on walls, demanding an end to infighting and violence in Libya. The demonstrations took place near the Martyrs Square where Libyans protested during the 2011 revolution, with over 2000 people participating. Compared to other demonstrations, and given Libyans’ fear of public spaces because of the insecurity in the country, this large gathering demonstrates that Libyan youth are actively engaged and still thirst for nonviolent means of expressing themselves, despite the risks.

Sounaa al Salam (Makers of Hope), of which I am executive director, is another example of youth courageously advancing nonviolence. Makers of Hope is currently working on a project that aims to combat violent extremism and empower women in society by reinforcing a culture of dialogue in Libya. This project brings together groups of young men and women leaders from six different Libyan cities (Tripoli, Benghazi, Misrata Jado, Zliten, and Gharyan) to envision spreading the culture of peace within those divided communities through education and awareness-building using media as a tool.

ONE OF THE MOST prominent initiatives by Makers of Hope was conducted during the parliamentary elections in June 2014 to encourage a peaceful voting process. Youth worked at a grassroots level, engaging directly and indirectly with citizens who opposed the elections to encourage them to vote. Dialogue took different forms, including the use of media through radio and television programs. I presented a talk show on AlRassmiya TV called “liqaa’ maa” (“Interview with”). The TV program hosted different social classes of citizens of diverse backgrounds and ideologies and talked about the positive results of the electoral process as a basis of building rule of law and institutions. This talk show aimed to demonstrate the importance of democratic elections and the use of dialogue rather than violence when addressing differing opinions. Furthermore, more than 1,000 youth volunteers from “Makers of Hope” functioned as observers during the elections, to contribute to an electoral process that establishes a legitimate democratic body to rule Libya, as opposed to the chaos the country currently faces. The election observation process was successful thanks to the great effort from youth across the country.

While there are many incidents of tragic violence in Libya, there are also young people who hold the pens of peace. We must not waiver in our ideas and objectives. International assistance and military actions are not sufficient to resolve the conflict in Libya. We – the young leaders from Libya – are far more effective on the ground, and we are much stronger than those calling for bloodshed.

Let us not forget Bin Saud and Al-Kawafi, and the actions of young people fighting for peace. The youth of Libya are still working to combat violence and support peace projects. We shall continue until the very end, and we shall prevail.

This article was written for CGNews.