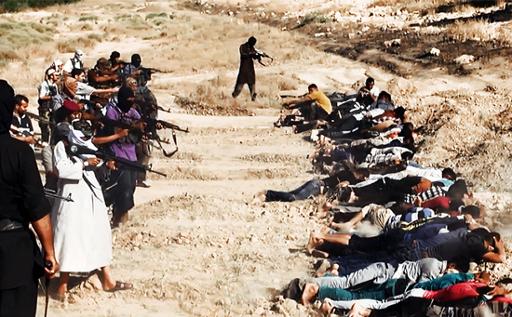 The Islamic State group is committing crimes against humanity on a large scale in Syria, a UN report said Friday, painting a horrific picture of beheaded minors and women held as sex slaves.

In its first report focused on acts by the IS group, the independent UN Commission of Inquiry on Syria said massacres, beheadings, torture, sexual enslavement and forced pregnancy were now part of life in areas of the war-ravaged country under the control of the extremist jihadists.

“The commanders of ISIS have acted wilfully, perpetrating these war crimes and crimes against humanity,” head of the commission Paulo Pinheiro, a Brazilian diplomat, told reporters, using an alternative acronym for IS.

“They are individually criminally responsible for these crimes,” he stressed, calling on the perpetrators to be brought to justice, for instance before the International Criminal Court.

Based on more than 300 interviews with people inside or who have fled areas under the control of the jihadists, the report paints a chilling picture of life under its rule.

The investigators also relied on documents, photographs and video footage released by the IS group itself, and Pinheiro said that by “documenting their own crimes” the group would be more easily brought to justice one day.

The IS group, which has declared an Islamic “caliphate” in an area spanning eastern Syria northern Iraq, is seeking to “subjugate civilians under its control and dominate every aspect of their lives through terror, (and) indoctrination,” the report found.

Massacres, the beheading of boys as young as 15, amputations and lashings in public squares with residents — including children — forced to watch were on the list of crimes.

There was also the widespread use of child soldiers, stoning women to death for suspected adultery and holding women as sexual slaves and forcing them to bear children to the fighters.

One person who fled the group’s stronghold Raqqa told investigators he had seen a man punished in a public square for looting.

“Two people held the victim tightly while a third man stretched his arm over a large wooden board. A fourth man cut off the victim’s hand,” the witness said.

“It took a long time,” he said. “One of the people who was standing next to me vomited and passed out due to the horrific scene.”

Others described scenes of still-bleeding bodies hanging from crosses and of heads placed on spikes along park railings.

One man said he witnessed the killing of a 16-year-old boy in Al-Ashara. The boy’s body was hung on a cross in a public square “for people to see what it looks like to be punished by ISIS.”

The IS group has executed scores of Iraqi security personnel and beheaded Western journalists and aid workers on camera.

It has also attacked members of the Yazidi and other minorities, and sold women and girls as “war booty”, with many being held as sex slaves and suffering “rapes by multiple fighters returning from the battlefront,” the report said.

The jihadists were also forcing Yazidi women and girls to bear their children, the investigators said.

The IS group, whose leadership is dominated by foreign fighters, meanwhile dictates every aspect of life for women in the areas they control, the report said.

One woman described the full body and face-covering garb women are forced to wear: “You can hardly see your way… I fell many times. It is hard to breathe. You are walking in the street but it feels like a prison cell.”

Children are also subjected to violence, and systematically recruited as soldiers. They are forced to witness and even carry out atrocities, the report said.

Pinheiro also said the IS group was systematically trying to indoctrinate minority children and turn them against their families, including 153 Kurdish schoolboys snatched in May and released six months later.

“It is a sort of time bomb,” he said, saying the boys’ parents had complained that they were using derogatory terms to describe their own families and communities.