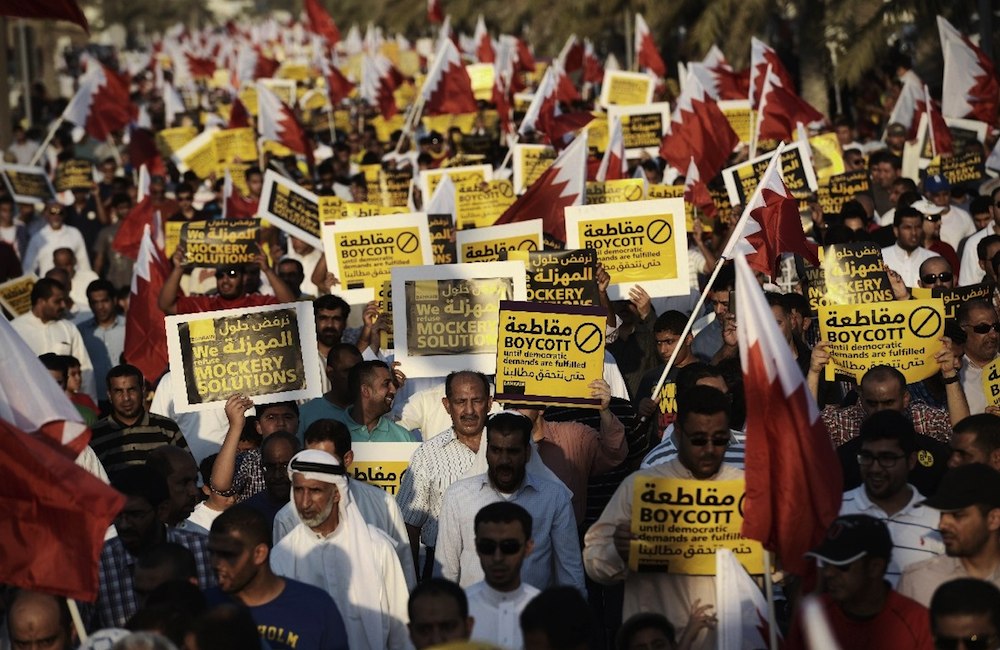 It has been almost four years since Bahrainis took to the streets, calling for democracy and political reforms. However, with only one day left before the parliamentary elections, the country still shows no signs of change or improvement.

Bahrain’s constitution, introduced by King Hamad bin Isa Al Khalifa in 2002, created a bicameral legislative body consisting of an elected assembly, the Nuwab Council, and an appointed consultative chamber, the Shura Council. The last parliamentary and municipal elections held in 2010, which reached a 67 per cent voter turnout rate, granted Al Wefaq National Islamic Society (the largest political party in the country) 18 out of 40 total seats. This year, four main opposition groups including Al Wefaq have already announced they will be boycotting the elections set for 22 November 2014 in protest.

On 28 October, the Supreme Court decided to suspend the activities of Al Wefaq for a period of three months. The Ministry of Justice filed the lawsuit early this year claiming the group failed to comply with rules about holding their general meetings. Hours later, Justice Minister Khaled Bin Ali issued a decree to block the court’s order. The lawsuit was filed weeks after senior US State Department official Tom Malinowski met with leaders form Al Wefaq. Shortly after, Malinowski was ordered to leave Bahrain.

“THE IDEA IS to prevent society from communicating with the outside world, and to pressure us into abandoning our demands,” says political assistant to the secretary general of Al Wefaq, Khalil Al-Marzooq.

The court had disregarded a notification form Al Wefaq that says they would hold their General Assembly on 4 December 2014, according to Al-Marzooq. In a press release issued on 29 October Al Wefaq said, “This raises questions on whether the lawsuit is meant to cripple Al Wefaq’s opinion to boycott the upcoming elections, or to correct its legal status.”

Al-Marzooq adds that participating in the elections would give the government no incentive to reform. “We do not want to legitimize the current corrupt situation that strips us from our rights. It is not an inclusive system that embraces all Bahrainis,” he says.

Al-Marzooq continued to claim that most candidates running for election are mainly independent, arguing that if the percentage of independent candidates is higher than of those within a political group, there is an error in the political arrangement in Bahrain. In the 2010 elections, independent candidates won 11 seats out of 40 in the parliament’s lower chamber, according to the National Democratic Institute (NDI).

Although the division between Sunnis and Shias in Bahrain is merely economic and political, government officials were successful in splitting the society into opposition, and opposition to the opposition. The dispute between the two sects is based on unwritten policies and discriminatory systematic practices that excluded the Shias, like forbidding them from joining the army in positions that allowed them access to weapons, or positions with the power to make tangible decisions. Geographically, Bahrain is designed in a way that segregates the Sunni from the Shia villages, excluding very few areas where a mix of both resides. This makes it easier to conduct house raids, without disrupting the peace of their supporters’ villages (mistakenly assuming that all Sunnis support the government, which is a myth).

Abdulhadi Alkhawaja, a prominent human rights activist sentenced to life imprisonment, wrote a letter from behind bars emphasizing the importance of boycotting the elections saying they lack fairness and equality. However Alkhawaja says boycotting alone is not enough, and it is necessary to unite efforts to escalate the peaceful movement and earn more international support.

The video above has been circulated on social media, showing Nayef Al-Jassem, a candidate from the Southern province delivering a speech in his campaign to win the votes of the people in his district. Al-Jassem decided to bring along an interpreter to translate his speech to “Urdu” urging the audience, consisting mainly of Asian nationalities, to vote for him.

This video reveals the level of political naturalization (the process by which a non-citizen may acquire citizenship) reached in Bahrain, which the opposition says is about “100 thousand naturalized” added to the population during the previous ten years. That is about a quarter of the total population. Although it is unclear whether the Asian workers in the audience hold Bahraini citizenship, it is safe to conclude that if they are expected to vote for Al-Jassem, they must hold the Bahraini citizenship.

The reactions on social media were mostly negative. Critics say that this is merely a tactic whereby the government favors politically naturalized citizens over its own people, whose demands and needs are being ignored. On the other hand, some might argue that the opposition should take on a similar measure and reach out to the minorities to include them in the development process of the country.

Two prominent human rights activists were put behind bars less than six weeks before the elections. On October 14, activist Zainab Alkhawaja, who is eight months pregnant, was arrested on charges of insulting the king after ripping a photo of him earlier in 2012. During her court session, she was arrested for once again tearing up a photo of the king and setting it in front of the judge. Alkhawaja has been released on November 19, but is still facing sentencing on December 4 and 9 in four cases.

Early in October, Nabeel Rajab, president of the Bahrain Center for Human Rights, was arrested for tweeting about a group of his countrymen allegedly cooperating with the Islamic State (ISIS). The Bahraini interior ministry said in a statement that Rajab was summoned because his derogatory tweets “denigrated government institutions.”

“The government wants to create an image of people participating and that everything is back to normal, even if only 5-10 percent of voters take part,” Nabeel Rajab told the Guardian in September. Rajab was released on November 2 pending a court verdict, and his next hearing will be held on January 20.

The regime has been obvious about prosecuting Bahraini subjects to set an example, and sometimes acquitting those deemed guilty in order to highlight their benevolence, as well as to avoid international embarrassment. Actions like these make it hard for opposition members to trust the government’s intention to implement change in the country.

Former member of the parliament Matar Matar, now based in Washington DC, says the current election process lacks legitimacy as the king refuses to share any part of his absolute power. “Still he appoints senior judges, the executive cabinet and the Upper House. And the gerrymandering in the lower house is hiding the will of the wide majority who are calling for reform.” Expecting a wide commitment to boycott the election Matar says, “any outcome of the coming election will not represent the Bahrainis.”

The lack of seriousness in working with the opposition to implement reform, and the continued harassment of opposition groups and activists, paves nothing but a blurry path to democratic change.

“We are fine to participate in an imperfect process if it can survive, but the parliament under this context, is not functioning,” says Matar.

THE GOVERNMENT is now more strategic in its crack down, as it slowly moves away from direct contact between police and people, and more towards systematic oppression through a legal framework. An example is a new law that sentences anyone who publicly insults the king up to seven years in prison and a fine of up to 10,000 dinars ($26,500 USD).

A concrete strategic plan is absent from the political scene in Bahrain. The regime is not willing to sacrifice and the opposition is not prepared to give up their demands, leaving Bahrain in an ongoing political limbo.

A longer version of this article is available on Faten’s blog.