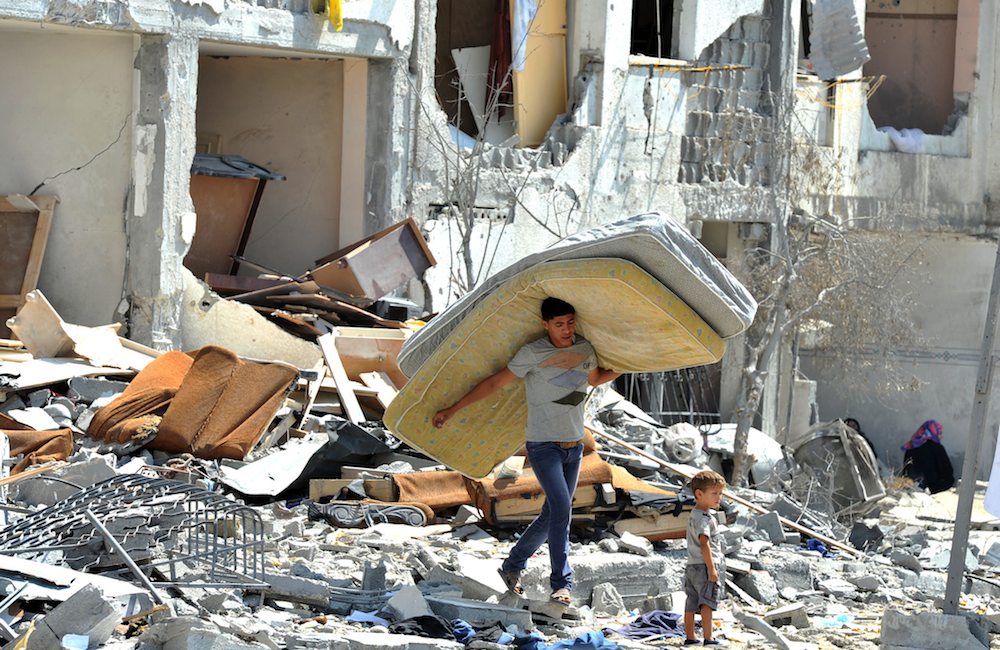 A Ramallah-based TV station set out to tell the stories behind the war with Israel. So far, over 2 million people across the Arab world have tuned in.

In July 2014, Israel launched a military attack on the Gaza Strip that lasted for more than six weeks. As a result of the attack, more than 2,000 Palestinians have been killed, over 10,000 have been injured and thousands of homes, schools, hospitals and mosques have been destroyed, according to the UN.

The media sector was also hit badly by the Israeli attack. Fifteen Palestinian journalists and one international media worker were killed, many journalists were injured, the houses of 16 journalists were destroyed and eight media outlets were shelled. According to a report by the Palestinian Center for Media Freedom and Development (MADA) from August, the Israeli army also interrupted the broadcasting of TV and radio stations and the services of various media websites.

THE LACK OF media coverage has had a heavy impact on civilians in Gaza. With thousands of lives lost or disrupted, the Ramallah-based Palestinian Wattan TV channel in October launched the project Voices from Gaza, a series of short portraits of individual Gaza citizens broadcast on Wattan and several other Palestinian and Arab news outlets.

”The people in Gaza are victims of the political polarisation between Fatah and Hamas, the two Palestinian political factions on one side, and the Israeli occupation on the other. The media affiliated with Fatah, Hamas and Israel covered the conflict focusing only on the political aspects and the military successes of the respective sides. The Gazan people were covered mainly in the form of numbers. Their stories, dreams and problems as human beings were largely ignored. Voices from Gaza focus instead on telling the uncovered human stories of the people from Gaza,” said Muamar Orabi, Wattan TV General Director.

“We wanted to cover the stories in depth. We wanted to show the story behind the war; what happened to a mother who lost her three kids and house. How a 6-year-old child deals with a new life as the only survivor of his family; how a professional football player attempts to rebuild his life after losing his leg and career. We wanted also to focus on the most marginalised groups in the community; women and children and we did not want to show blood. It became about the daily life and people’s story,” said Sai’da Hamad, Chief Editor of Wattan TV.

May Marei, senior video editor, added: “During the attack, the media focused on the people who got killed. In Voices from Gaza, the focus is on the people who are still alive. We wanted to show that these people are not begging for food and that they do not just want aid. They want their dignity. We also made sure to not show the faces of children. We mainly wanted to open a window for these people to speak to the world.”

Eighteen journalists, photographers and staff members from Wattan TV’s offices in Ramallah and Gaza are involved directly in this project. The two offices work closely together, they identify the main frames of the stories, discuss all details and communicate on a daily basis. Most of their work is done via Skype because it is almost impossible for the journalists to move freely between the two occupied Palestinian areas Ramallah and Gaza.

“There are technical problems that cause delays in sending the stories to Ramallah. It might take a whole day to send one story because of the slow internet connection and the power cuts,” said Mohammed who works in the Gaza office. “Another problem is that sometimes the expectations of the people we are interviewing do not correspond to our task and aim at hand. Some people think that we are coming to solve their problems rather than to tell their stories”.

Razan Al Sa’afine, a reporter from the Gaza team, added: “It was also not easy to shoot (the stories) because of all the destroyed houses and remnants that we had to stand on top of.  Another problem was the coordination with organisations and hospitals. Some of these institutions were scared of the reports, mainly worried about the political impact, but we explained that we simply wanted to show the human stories”.

Having female reporters and photographers in the Gaza team eased the team’s access to a wider group of interviewees, mainly women. But it was not always easy. “We had a couple of stories where the main characters were women, and in which the families did not want their daughters to be on TV because they were women. It took us more negotiation and efforts to convince them to let us film them,” said May.

“We found people who really wanted their story to be heard, but because of the violence and everything that had happened, these people had lost hope and had stopped believing that their stories would make a difference,” added Sai’da.

VOICES FROM GAZA focuses on the effects of the crisis on the lives of Gazans, while most other programmes emphasise regular TV reports which focus on electricity and food shortages.

“The target group of the project is the Palestinians in occupied Palestine and in the diaspora and the Arab world. We want the stories to be subtitled, so people from other parts of  the world can understand the daily tragedy in which the people of Gaza live,” said Sai’da.

An estimated 2 million people in Palestine and in other parts of the Arab world have seen the stories of Voices from Gaza.

Voices of Gaza was made possible with backing from International Media Support (IMS). This article originally appeared on IMS’ website, written by Falastin Ismail.