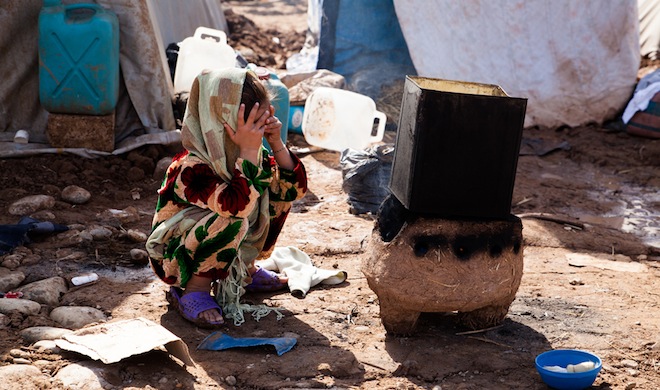 The Islamic State (IS) massacre of Iraq's Yezidi minority in the town of Sinjar has been widely documented and reported worldwide since August. But the survivors are now saying that the reported narrative is incomplete, claiming they were betrayed by the Kurdish peshmergas.

The Iraqi central government and the autonomous Kurdistan Regional Government (KRG) have termed the massacre “genocide”, while the UN timidly describes it as “an attempted genocide.”

The Yezidis rescued from Iraq’s town of Sinjar to Syria’s Kurdish north, where they have settled at several refugee camps, are saying that it is “irrelevant” how the massacre is described as they are being neglected now.

Still, they claim that the regional Iraqi Kurdish peshmerga forces “betrayed” them, adding that the central Iraqi government has been “reluctant to send troops to drive out IS from Yezidi areas.”

In addition, they say that the international community “does not send aid for Kurdish guerrilla forces and Yezidi fighters holding out against IS at Mount Sinjar to defend remaining stranded civilians.”

The predominantly Kurdish Yezidi town of Sinjar in the Nineveh province in northern Iraq was under the full-control of the Iraqi Kurdish peshmerga forces for a decade.

The Yezidis say that the Iraqi peshmerga forces fled the town without having initially informed the civilians when IS initiated the attacks on 2 August.

They say that the Muslim Kurdish tribes of Sinjar had also joined IS ranks to massacre the innocent Yezidis as did the Muslim Arab tribes.

However, what Yezidis are saying about the massacre now is nowhere to be found in the official account propagated by the Iraqi central government and the Iraqi Kurdish authorities.

Meanwhile, the partisan Iraqi Kurdish press tied to the ruling party blame only “Arab neighbours” for having joined IS in Sinjar back in August, masking the fact that Muslim Kurdish tribes too had part in the massacre.

The Xebat daily newspaper, organ of the ruling Kurdistan Democratic Party (KDP) in Iraq, for instance, on 27 November carried a page-2 report saying: “Arab tribes near Sinjar joined IS terrorists to massacre Yezidi Kurds and this is a lesson learned to never trust such neighbours.”

Similar reports blaming only “The Arabs”, yes with such a generalisation, are too common these days in the ruling party’s media outlets.

They say that the regional Iraqi Kurdish peshmerga forces “betrayed” them

“The bitter reality is that the peshmerga forces abandoned us and withdrew from Sinjar without having informed us. We consider this a betrayal because they are Kurdish like us Yezidis. Also, the Muslim Kurdish tribes in Sinjar joined IS too, they killed our people and helped IS abduct our women and children, ” said Maryam Shengali, a renowned Yezidi woman living with nearly 5,000 Yezidi refugees in the Kurdish-controlled town of Derek, northeast Syria.

Around 7,000 Yezidi civilians were killed during the IS genocidal campaign in Iraq’s Sinjar and 5,000 women, including hundreds of children, were abducted, according to figures by several international human rights organisations.

“It is true that the Arabs betrayed us but Iraqi Kurdish authorities must admit that the Muslim Iraqi Kurdish tribes in Sinjar also joined IS and murdered innocent Yezidis. The latter speaks the same Kurdish language same as us Yezidis do but they joined IS and massacred Kurdish Yezidis,” she said.

Mrs Shengali is a respected figure among the Yezidis and she seemed very upset when recalling what she believe was Kurdish tribes’ collaboration with IS jihadists in Sinjar.

“I am angry because Iraqi Kurdish authorities use every means to hide the fact that their peshmerga forces betrayed us in the first place and they propagate that no Kurds had part in the massacre,” she said. “But the reality is that the Yezidis of Sinjar were massacred because of a religious order issued by the IS jihadist bandits. Muslim Kurds and Arabs of Sinjar ecstatically joined IS to carry out this religious order to kill us Yezidis with devotion and did not even spare the children so they annihilate us from our ancient homeland.”

As the IS jihadists had advanced into Sinjar some of the Yezidi locals had fought back with limited resources to allow time for the civilians to make an escape and flee to the nearby Mount Sinjar.

The former Yezidi fighters claim that the Iraqi central government was contacted amid the clashes to airdrop weapons, but Baghdad officials had simply  “ignored” their cries to continue the resistance.

“Our Yezidi representatives constantly contacted the Iraqi parliament and the Iraqi military commanders in Baghdad urging weapon airdrops to continue the fight.  Baghdad was unresponsive. We run out of ammunitions and Sinjar fell. Then, it was every man for himself in order to run and make an escape,” said Semo Ali, a former Yezidi fighter who was later taken to Syria along with around 100,000 others Yezidis rescued by Syria’s Kurdish militias and guerrilla fighters of the Kurdistan Workers Party (PKK).

“The PKK guerrillas as well as the Syrian Kurdish militias came to our aid after they had managed to cross the Iraqi border. They established a long defensive line, raised our morale and then began the rescue mission. They first took the women and children then everybody else was rescued,” he said.

The Yezidi refugees say that they are “now puzzled” as to why they are being so neglected by the international community too, although the guerrilla fighters and Yezidi armed locals hold out against IS offensives on a daily basis in defence of nearly one thousand Yezidi civilian families stranded at the Mount Sinjar.

They say that no weapons or humanitarian aid are being deployed to help keep up the the resistance and rescue remaining civilians who are now taking refuge at the Yezidi Sherfaddin shrine situated at the peak of the Mount Sinjar.

The IS jihadists have taken full-control of the “safe corridor” that linked Sinjar to Syria’s Kurdish region.

“We are still confused that we were suddenly massacred over a couple of days in Sinjar.  Then, the whole world focused on our tragedy and now everybody ignore us,” said Sherzad Xeiro, the only survivor of his family now living as a refugee at the Newroz Refugee Camp in Derek of Syria.

“Baghdad, Erbil and the international community used our tragedy for their own interests and turned their back as soon as they achieved their goals,” he claimed. “Otherwise, how on earth is it possible that the whole world could so irresponsibly ignore the plight of survivors of an unprecedented genocide who still fight against IS under such severe circumstances at Mount Sinjar?” Xeiro asked, as do almost all the Yezidi survivors living across the refugee camps in Kurdish Syria.